Parallels of Christ in MAN OF STEEL 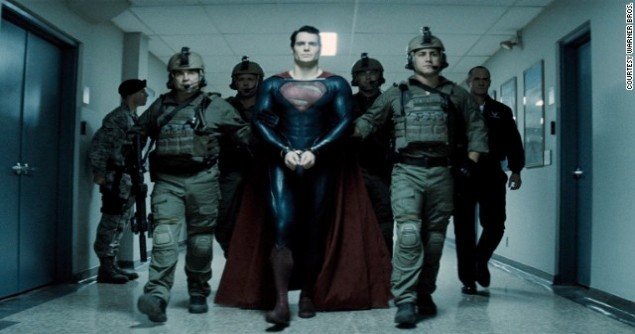 Parallels of Christ in MAN OF STEEL

It is not hard to see that Superman is a character that resembles Christ. Movieguide® has seen many of the past Superman films stressed this also, but, like SUPERMAN RETURNS, its predecessor, MAN OF STEEL seems to show this even more so.

MAN OF STEEL portrays Clark Kent’s early years, growing up, being raised by two parents who were not his biological parents, but who had a great love and understanding of his power and worth. Clark’s father seems to truly believe in Clark “changing the world someday” and continues to tell Clark as a child that he will bring hope and truth. While Clark’s mother also tells Clark that “the truth about you is beautiful” and one day he will bring that truth to mankind, which will bring them hope.

In this Superman movie, Clark grows up being bullied, which his father said is a result of people of this world rejecting him, but he constantly turns the other cheek, but at one point does display righteous judgment. Even as a boy, in Clark’s core he seems to know he’s not of this world, but he realizes he is there for a purpose. He cannot restrain himself from helping others and saving lives. All of these things are clear parallels to the life of Jesus, whose mother too understood she was carrying the savior of mankind. When Jesus was younger, he was rejected at points, but at the temple he showed righteous judgment when the House of Worship was being turned into a den of theives.

When Clark reaches 33, he encounters a computerized simulation of his biological father’s personality. The simulation tells him his purpose is to “lay down your life.” It also tells Clark that he’s not from this world but is in the world and therefore “embodies both worlds.” This is a parallel to Christ being both Man and God at the same time. In this respect, the computer simulation of his biological father becomes like the Holy Spirit, aka the Holy Ghost.

Just like Jesus, who was crucified at age 33, Clark realizes he must save the world at this same age. ** SPOILER ALERT ** When Lois Lane is hurt, Clark tells her he has the ability to heal her, which he does. Of course, we know Jesus performed many healings of the sick. The simulation of Clark’s father also tells him he is “the bridge between these people to another world.” Similarly, Jesus is the bridge, or mediator, between God and Man.

In the movie, General Zod is the villain who’s trying to destroy Earth. As such, he is clearly a metaphor for the devil who wants to bring death and destruction, while Jesus brings life and hope.

MAN OF STEEL is a great example of a Christian parable in today’s popular culture. It shows a clear Christ-like hero. There are some cautionary elements, however, so please take a look at the our full review at https://www.movieguide.org/reviews/man-of-steel.html.