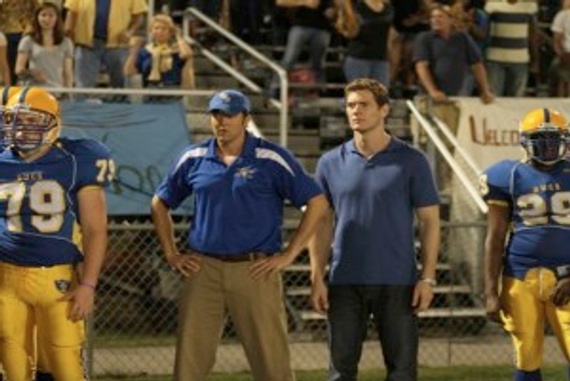 Ryan McPartlin stars in the latest Walmart Family Movie Night, GAME TIME: TACKLING THE PAST. Movieguide® had a moment to chat with him about the movie, the final season on the hit show CHUCK and why he got involved in a family


movie in the first place.

For Ryan, playing a pro NFL player in the movie came easy. He was a tight end in college, but when getting into acting, he lost weight and tried to distance himself from the football type image. When he got the script for GAME TIME, he thought that it has been a dozen years since he played and maybe this could be his closure to his football years.

The added bonus for Ryan was learning that Beau Bridges was in the movie as well.

“I’ve always had such respect for the whole Bridges family. They are Hollywood royalty,” Ryan says. “I had a feeling that this movie could turn into something special, and I was right.”

For Ryan, the best part of the movie was working with and hanging out with Beau Bridges.

“I learned so much from Beau. I would sit back and listen to him give advice about being both an actor and a dad. I had to remember to just shut up and listen.” He thinks that a bond was created between the two of them that shows up on the screen.

While that aspect was great, the schedule was not during the shoot. For four weeks, they worked from 4 pm to 4 am because they had to work around the class schedule of the high school where they shot.

“It was hard to keep the energy up and it was a struggle. But, it was a short four week run, so I sucked it up and made the best of it.”

As to why Ryan got involved in the movie, he has a quick answer.

“I’m a father now and my boys are still young, four and two years old,” Ryan noted. “We can’t watch TV until they’re in bed. The programs we like to watch we can’t have on. But, I’m proud to have been a part of a movie that not only can we leave on in the room with the kids, but one they can watch, enjoy and hopefully learn some morals and values that are instilled in the movie.”

He goes on, “I have 12 nieces and nephews now and am very aware of what is programming their minds. I’m glad Walmart and NBC have carved out a family night. We as parents have got to be proactive. We can twitter the networks or use Facebook or send them an email. Let your voices be heard and tell them what you want to watch. Be proactive.”

Ryan cites the success of this strategy with his TV series CHUCK. By the fans giving feedback to the network, they kept it from being canceled prematurely a few years ago. Now in its final season, Ryan promises that this year’s CHUCK will be the best as the cast gives their all.

With GAME TIME hitting the air this Saturday and CHUCK coming back for its last season, Ryan is very busy being both an actor but more importantly, a Dad.

You can read the Movieguide® review HERE.