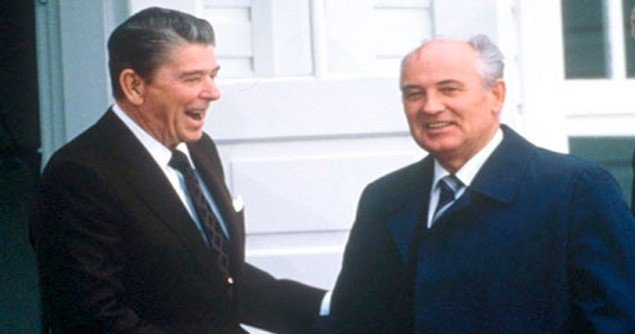 Ronald Reagan is back, in REYKJAVIK, a new movie from British director Mike Newell (DONNIE BRASCO and HARRY POTTER AND THE GOBLET OF FIRE) to hit theaters in 2014.

Covering the tense nuclear peace negotiations that took place between Ronald Reagan and Mikhail Gorbachev at an Icelandic spa in 1986, this Ridley-Scott-produced indie will feature Michael Douglas as Reagan and Christophe Waltz as Gorbachev.

Oscar-winning Douglas, who has played a President before (THE AMERICAN PRESIDENT), has often expressed his liberal ideology, and thus some have voiced concern about his upcoming portrayal of Reagan, conservative and GOP hero. These concerns have not been alleviated by the fact that Participant Media (Al Gore’s AN INCONVENIENT TRUTH) is financing the film.
Historically, the media always blamed Reagan for the Reykjavik Summit’s failure after he walked out of the meetings following Gorbachev’s demand that America end its anti-ballistic missile programs.  It is unlikely that left-leaning Douglas and Participant Media will challenge this narrative.

Regardless of how the late President is portrayed in the upcoming political thriller, REYKJAVIK is sure to tell an exciting and mesmerizing tale of the two world leaders whose complex relationship eventually led to the end of the Cold War.