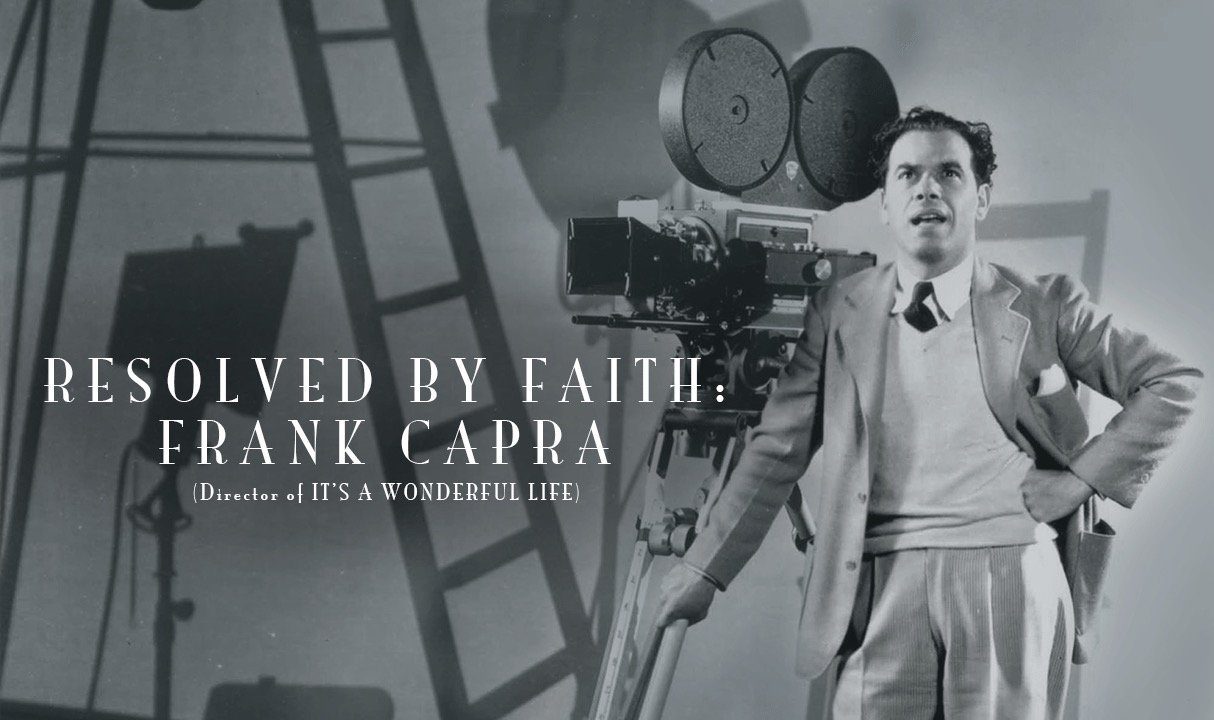 Frank Capra’s notable movies from the Golden Age of Hollywood include MR. SMITH GOES TO WASHINGTON, LOST HORIZON, YOU CAN’T TAKE IT WITH YOU, IT HAPPENED ONE NIGHT, MR. DEEDS GOES TO TOWN, MEET JOHN DOE, and many more. Most likely, his most beloved movie is the Christmas classic IT’S A WONDERFUL LIFE.

MEET JOHN DOE, for instance, hinges on God’s command to “Love thy neighbor” and the plot problem at the end is resolved by a cogent, inspiring, incisive, and heartfelt reference to Jesus Christ and His sacrificial death for all mankind.

Frank Capra was a multi-faceted and multi-talented artist. He wrote, directed and produced movies with elements of romance, comedy, family values, patriotism, intense drama, and most importantly faith.

Profoundly and substantively, his movies often deal with doubt and struggle, which are overcome by faith.

Christian evangelist Chuck Colson, who founded Prison fellowship, wrote about Rod Bennett’s lifetime fascination with Frank Capra and what he finally came to understand about Capra.

“In 1974, 14-year-old Rod Bennett was sitting before a television set, mesmerized by an old black-and-white film called IT’S A WONDERFUL LIFE by director Frank Capra about George Bailey, who dreams of leaving small town Bedford Falls and doing great things in the world. But he is trapped by a sense of obligation to his family and to the town. After enduring a long series of setbacks and disappointments, on Christmas Eve, George is standing on a bridge, contemplating suicide. But then, an angel appears and reveals to George that, instead of enduring what he had considered a failed, hum-drum existence, he really lived a wonderful life.”

As an adult, Bennett discovered that Capra was raised a Sicilian Catholic family “who, despite grinding poverty, enjoyed great happiness [and was] raised to believe in the Christian faith as the way to understand man and his destiny.”

Bennett saw another side of Capra, who studied chemistry at Cal Tech. “The cinema of Frank Capra would be the cinema, not of blind faith, but of doubt and doubts resolved, just like science experiments.”

As he struggled to overcome the challenges for a working-class immigrant, Capra worked his way through college as a chemical engineer. In the mid-1920s, Capra first became involved in cinema for silent comedy producer Hal Roach and his Our Gang series. He continued with comedy and Capra helped develop a comic persona for silent comedian Harry Langdon, “the man-child whose only ally was God.”

“If there was a rule for writing Langdon material,” Capra once said, “it was this:  his only ally was God. Harry Langdon might be saved by a brick falling on a cop, but it was verboten that he in any way motivated the brick’s fall.”

After the silent era, Capra started teaming up with writer Robert Riskin. Capra gained attention from his superb direction on such dramas as AMERICAN MADNESS, LADY FOR A DAY and THE BITTER TEA OF GENERAL YEN.

Then, he and his stars, Clark Gable and Claudette Colbert, struck it big on the comedy IT HAPPENED ONE NIGHT, a poverty row movie that swept all five of the major Oscar Awards in 1935.

Capra went on to win two more Best Director Awards, for YOU CAN’T TAKE IT WITH YOU and MR. DEEDS GOES TO TOWN, and to be nominated for two more.

Before participating in World War II, Capra worked with Riskin to make the 1941 political comedy-drama MEET JOHN DOE, starring Gary Cooper and Capra’s own discovery, Barbara Stanwyck. Between 1942 and 1945, Capra produced the outstanding “Why We Fight” series commissioned by General George Marshall. In 1946, Capra made his classic IT’S A WONDERFUL LIFE for his company Liberty Films.

Maria Elena De Las Carreras Kuntz quotes Richard Griffith when he said that in Capra’s stories an “innocent pits himself against the forces of entrenched greed. His experience defeats him strategically, but his gallant integrity in the face of temptation calls forth the goodwill of the ‘little people,’ and through their combined protest, he triumphs.”

Kuntz also quotes novelist Graham Greene’s description of Capra’s moral formula as “the theme of goodness and simplicity manhandled in a deeply selfish and brutal world.”

Kuntz said, “Capra’s cinema reminds us that this imperfect world can be redeemed, that the reward is worth the fight, and that life is a gift to be treasured.”

Once, when he was accused of making “larger than life” movies with only happy endings, Capra replied that Moses and the apostles of Jesus Christ were larger than life men.

He defined Hollywood as split between two camps, Mr. Upbeat and Mr. Downbeat. He said he was proud to be part of the Mr. Upbeat crowd, rather than “the ‘ashcan’ school” whose “films depict life as an alley of cats clawing lids off garbage cans, and man as less noble than a hyena. The ‘ash-canners,’ in turn, call us Pollyannas, mawkish sentimentalists and corny happy-enders.”