How Sadie Robertson Handles Fame and Stays Grounded in God 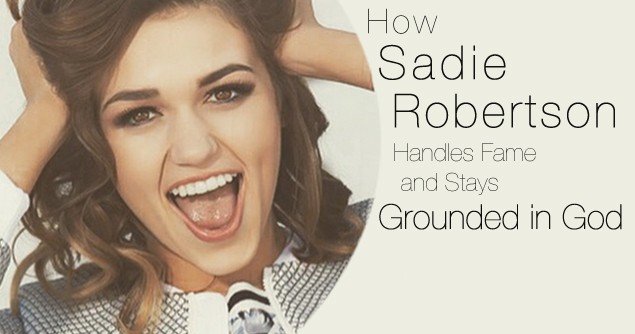 How Sadie Robertson Handles Fame and Stays Grounded in God

In an interview with the Christian Post, Sadie Robertson, the daughter of Duck Dynasty couple Willie and Korie Robertson, discussed how she has managed to not get caught up in the problems and temptations that so often plague the lives of celebrities, especially teenagers, and how she plans to continue to live above those troubles.

“I think the key to that is recognizing that it’s not all about me, it’s truly not. God gave me this, and this is all about God,” Robertson told The Christian Post in an interview.

She continued to say that if she had come into fame thinking that it was for her, things would have been far more challenging, and she would have “gotten lost in it all.” She emphasized the importance of instead coming into it with the view that all of it, fame and attention included, are not for her but for God.

Sadie and the entire Robertson family are the stars of A&E’s hit reality show, Duck Dynasty. The show has just recently finished its eighth season, with the season finale pulling in 3.26 million viewers.

Robertson said her family has been instrumental in helping her navigate an environment as difficult as the world of fame.

“Whenever you try to be someone that you’re not, that’s really hard. You can get really confused and honestly, it’s so crazy. So I’m thankful that I had a family that showed me that before I had to deal with it,” she said.

Beyond just her family, however, Robertson says she has relied on God above all to help guide her. In addition to her family’s reality show, she is currently working with evening wear designer Sherri Hill. Together, they have created the Sadie Robertson Live Original line of prom dresses. Robertson modeled during New York Fashion Week in 2013 and is now the face for Wild Blue Denim.

She also starred in the 2014 season of Dancing with the Stars. The 18-year-old has even done motivational speaking and has written her own book, titled Live Original: How the Duck Commander Teen Keeps It Real and Stays True to Her Values.

As incredible as all of her achievements are, especially for someone so young, Robertson is quick to explain that she could not have planned it on her own, but rather owes all her success to God.

“I used to plan what my life would look like, then I realized God will take you to so many bigger places than you can ever imagine. So why try to plan? My plan, although it may have been a good plan, it wasn’t as good as the plan that God had for me. I would have never imagined I would be at the places I am today or done things that I’ve done today.”

Robertson is set to appear in two upcoming movies, God’s Not Dead 2 and I’m Not Ashamed.