Study: Juvenile Crime Based on Morals, Not Poverty 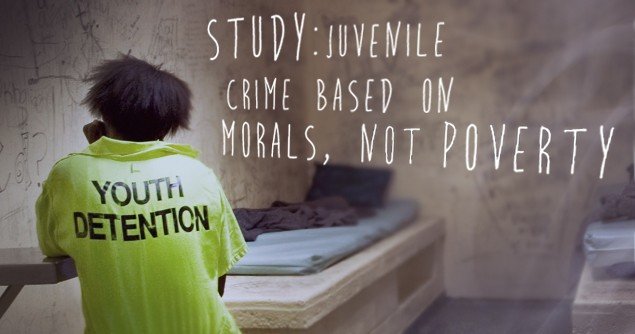 It has long been said that poverty-stricken environments are a major factor leading to crimes committed by adolescents.

However, the Peterborough Adolescent and Young Adult Development Study, conducted by Cambridge University, suggests that crime among teenagers is influenced as much or more by their morals as it is by their environments, including their economic background.

According to the study, nearly half of adolescent crimes are committed by a miniscule 3.8 percent of teenagers. This group of teenagers averaged 278 offenses each over the course of the five-year study, which followed the teenagers from the age of 12 through 16. It was also found that this small group committed the majority of serious crimes, especially property damage. In fact, 60 percent of crimes were committed by only 16 percent of youths in the study (which included the above 3.8 percent).

The most interesting part of the study, though, is not necessarily the concentration of crime within such a small percentage, but rather that the one of the strongest identifiers among those who committed more crimes was a simple weakness of morals. Many of the youths even admitted to reckless tendencies and a lack of a moral compass.

The teenagers’ acknowledgment of their propensity for crime may come as a surprise to some, but perhaps it shouldn’t.

While teenagers are still developing both physically and personally, they are also mature enough to be self-aware and conscious of their own decision-making. Some have said that since the brain’s frontal lobe – which is responsible for decision making, problem solving, and self-control – doesn’t finish developing until a person is in his or her early 20s, teenagers are more susceptible to poor judgment and possible wrongful activities. While this claim does make some sense, and a person’s teenage years are a time for continual, and often pivotal, development, it should also be said that adolescents still possess an incredible capacity for complex thinking and intelligent (even if not wise) consideration of factors and decisions. Whether or not they utilize that is a different matter.

However, there are some who do.

The Cambridge study also found that, in addition to the heavily criminal percentage of youths, there is a comparable percentage that is especially “crime-averse.” In contrast to the 16 percent who committed more than 60 percent of offenses, the 16 percent who were reported to have the strongest morals committed a measly 0.5 percent of offenses. According to the study, these law-abiding youths chose not to commit crimes not because they didn’t have the opportunity, or that they feared being caught and punished, but rather for the fact they believed it to be wrong.

These results challenge the notion that poverty-stricken and crime-heavy environments are the biggest factor in teens committing crimes. Thus, while desperation can absolutely lead people, teenagers included, to commit crimes, environment is not the only, or even the most influential, factor.

A teenager’s propensity to commit crimes might lead to a tendency to label such youths as “amoral” or even “bad.” However, it’s not that simple.

Each person is a complex and unique individual with his or her own story. So, while their actions may be wrong, this doesn’t mean they don’t have the potential to do good, or that they can never change.

Perhaps, therefore, we should ask what might be the most influential factor in the moral development of teenagers. The Gospel of Jesus Christ and Christ’s instruction to “treat others how we wish to be treated” are vital here. The Gospel, filtered through the Bible and the power of the Holy Spirit, can transform hearts, minds, and behaviors. And, Jesus Christ’s admonition to treat everyone we encounter (including and especially teens) with respect and consideration is often the best example we can set in promoting moral behavior.