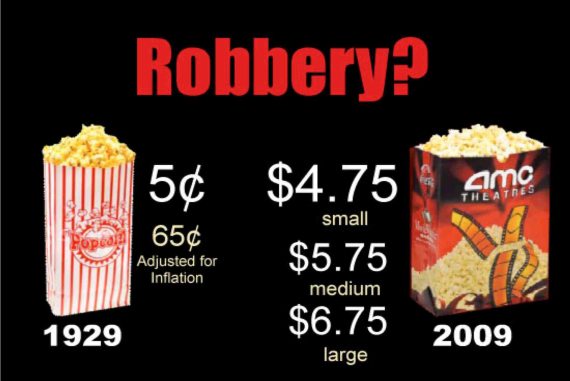 A grocery store can make money selling you three bags of microwave popcorn for $1.75 (58¢ a serving).

When a bag of popcorn costs you 50¢ and you can legally sell it for $4.75, why should you consider a life of crime? Just sell popcorn! But, that’s not the full story.

In 1929 theaters charged 5¢ for a bag of popcorn (and 35¢ for a ticket). Adjusted for general inflation, popcorn cost 62¢ then and tickets cost $4.32. Today, tickets actually cost closer to $10 (more than double the general rate of inflation), but popcorn prices at $4.75 are almost seven times the rate of inflation.

The cost of a White Castle burger can be less today than the impact of general inflation because White Castle doesn’t have to rely on Hollywood studios to get customers in their doors. Theaters pay movie distributors a percentage of box office receipts. The more popular a movie is expected to be, the higher the percentage a distributor can demand from theaters. The percentage paid by the theater drops as the weeks go by, but so does the audience. Contracts that require a showing of a certain number of weeks can result in almost empty theaters.

Clearly, theaters could not stay in business on the revenue from ticket sales alone.

The reason for popcorn robbery grows worse and worse as theater attendance declines. The less you sell of something the more you need to charge to make a profit. Before television and the abandonment of the Motion Picture Code, the percentage of Americans going to movies each week was much higher. As audiences shrink, prices must rise to cover fixed costs.

A theater could do very well selling popcorn for $1 if it attracted four times the audience it does today. At $1 a bag, a higher percentage of moviegoers would probably buy it.

The same is true of ticket prices. If evening show tickets cost only $5, you can expect many more people would go to movies, but the driving force will always be entertainment value.

People do not go to theaters to buy popcorn. They don’t say, “I’m in the mood for popcorn. Let’s go see a bad movie so we can pay too much for popcorn.” They go to see movies they hope they’ll like and they buy popcorn to enjoy while watching their chosen movie. The more movies people are disappointed in, for $10 a ticket, the less often they’ll come buy popcorn. Some people have completely given up on going to theaters. Rather than risk $10 a ticket and pay $4.75 for popcorn, they’ll get some microwave popcorn and wait for movies to come out on Netflix.

If Hollywood would charge less for tickets and popcorn, they would draw larger audiences. Depending on how much larger the audiences are, they could even make more money. The difference in risk between seeing a movie at a theater or on Netflix narrows. The movie distributor can make more money on the sale of $20 in $5 tickets than they can on 50¢ in Netflix commissions. The theater doesn’t make a dime on Netflix commissions and I doubt Orvil Reddenbacher gives charitable contributions to theater chains.

Hollywood spends a fortune making movies filled with spectacular special effects but chases away audiences with offensive content. Rather than give a rave recommendation to a movie, parents often have to say, “But there’s this one scene where the kid . . .” Sometimes, rather than give a recommendation at all, a parent will simply not tell friends about a movie. Worse, they may warn friends and family against seeing it, especially if they consult the comprehensive reviews on MOVIEGUIDE®’s family-friendly website, www.movieguide.org.

If you’re a parent who loves movies and you go to Apple movie trailers to see what’s coming out soon, you have to see six posters for movies you can only wonder why they were even made before you see one you might consider taking your wife, much less your children. You can spend 15 minutes plowing through the $5 DVD bin at Wal-Mart and not find one movie you consider worth $5.

The most important thing Hollywood can do to get audiences back in theaters is to improve the entertainment value and moral values of movies. You’ll sell many more tickets, much more popcorn and a lot more DVDs with great wholesome entertainment than with vulgar, immoral trash.