EDITOR’S NOTE: Dr. Reisman, president of the Institute for Media Education in Crestwood, Ky., is the author of KINSEY, CRIMES & CONSEQUENCES. This article is reprinted with the permission of Dr. Reisman.

In his inspirational, and charismatic July 17, 2007, speech to Planned Parenthood sexperts, the now President Barack Obama encouraged “age-appropriate sex education, science-based sex education in schools,” even for kindergartners. It is “the right thing to do,” urged our democratically elected 2008 U.S. President. In fact it is really the left “thing to do.”

June 23 marks the anniversary of the birth of Alfred Kinsey, whose studies of human sexuality electrified American society in the late 1940s and ‘50s. Kinsey’s groundbreaking scientific investigations on human sexuality resulted in two thunderously popular volumes of landmark sex research that tore through century-old veils of hypocrisy about all things sexual. By unveiling widespread sexual behaviors throughout the United States, Kinsey and his team of researchers demonstrated unheard-of truths including:

·      Women and men have sex before marriage and outside of marriage

·      Many, many women and men have same-sex sexual fantasies and experiences

In fact, Kinsey’s pedophile rapists orally and anally sodomized hundreds of boys for his Male “orgasm data.” Infants and children screamed, cried, and begged for rescue from PP’s “play.” See, for example, below in Table 34, page 180 of Sexual Behavior in the Human Male (1948); rescue never arrived. 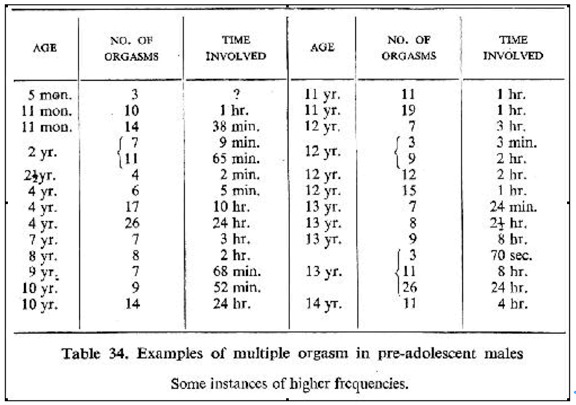 The PP falsehoods are so bizarre that the one must ask how far off the sanity grid can PP “sex scienceot; mavens fall? PP says until Kinsey people didn’t know women could “experience orgasm by clitoral stimulation.” Poor Freud; for years prior HE got the clitoral orgasm award. PP’s claim no one knew until Kinsey that people have “sexual fantasies and experiences!”

Such outrageous ignorance is pandered as PP “sex science” for adults and kiddies! PP adds that Kinsey got all of his information from “spoken interviews with 18,000 women and men.” For that nonsense, PP needs to explain how “spoken” interviews produced Table 34 (over 200 children, all under age 12) and similar tables in Kinsey’s Male volume. Pinto’s new documentary THE KINSEY SYNDROME proves that these were sexual assaults, not chats.

PP concludes with the additional (“sex science”) pabulum, boasting that Kinsey, a sexual predator, “sped our way to understanding a core belief that we hold dearly [sic] today.” Pray, what is that “core belief”? Why that sex is part of our “being human.” We learned that from Kinsey?! That sexuality is “lifelong,” meaning that it starts in the womb? That sex should be “celebrated with respect, openness, and mutuality.”

Well, until Kinsey, past generations didn’t know all that, of course! They didn’t feel “respect” for sex? They were closed to sex? There was no “mutuality” for the Greatest Generation that won WWII? They didn’t know that?

And now, living according to Kinsey and PP’s “core belief” are women and children, marriage and love, healthier and safer? Do children play alone in our parks in the day? Do women stroll alone our streets at night? No, Mr. President. Your idea that PP should educate anyone in “sex science,” or that Big Pornography lawyers will protect the equal rights of women and children, are misguided in the extreme. Kinsey, Planned Parenthood, and Big Pornography have pulled off America’s Morality Heist.