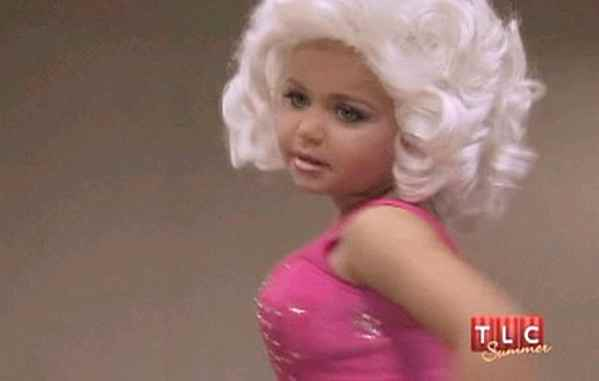 The Scandalous Exploitation of our Children

A new reality show goes behind the scenes to reveal the twisted, almost pornographic word of child beauty pageants. In a recent episode the TLC series, a, four year old toddler’s tiny frame is “enhanced” with fake breasts and buttocks to emulate the hour glass figure of her heroine, country singer Dolly Parton.

She’s then stuffed into a slinky, sequined red dress and encouraged to shimmy and shake her hips on stage while blowing provocative kisses.

In the accompanying video, chronicling the transformation of little Madison Jackson into a sultry seductress, her mom, Lindsay, of St. Juliet, Tennessee brags that she wore the very same outfit when she competed.

“I started doing pageants at the age of nine months,” she brags. “And I competed in over 600, winning over $85,000. I have more crowns than Maddy but she’s doing okay.”


As Maddy sashays on stage during a competition, an animated Lindsay stands off stage pursing her lips, shaking her shoulders and encouraging her daughter to ‘sex up’ her act.

The result has many people shaking their heads in disbelief and shame.

Viewers of the show were shocked seeing the padded Maddy come onstage and try to act sexy like a pint-sized Dolly.

“Isn’t this child pornography or something?” writes one.

Adds another, “The ultimate in bad taste.”

Regrettably, Maddy’s mom tossed off the criticism, saying the C-cup false breasts and padded behind are simply part of a harmless costume.

“To us, it’s just normal,” says Jackson. “It’s an outfit made for me when I used to compete in. When she wears the fake boobs and the fake butt, it’s just like extra bonus.”

We are reminded of the tragic demise of another little pageant queen, JonBenet Ramsay who was mysteriously murdered in 1996 at the age of six. At the time, child beauty pageant industry was blistered by criticism that the tots were being made up and costumed to look like grown-up showgirls – which drew the sick attention of child molesters and other perverts.

JonBenet’s mother Patsy, who died of cancer in 2006, later admitted that having her daughter heavily made-up and prancing in scanty, grownup costumes at pageants may have attracted her killer, say sources.

A regretful Patsy reportedly sobbed about it at a family get-together, saying, “I’m sorry. I’m sorry.”

Now, Jackson is being blasted for going even further with her toddler daughter Maddy. Experts say they are “horrified” and “nauseated” by the TV show.

“The concept of enhancing the child’s breasts and buttocks is evil, abhorrent and caters to pedophilia,” says .Dr. Ted Baehr, founder of Movieguide and a family values crusader.

Medical experts were also shocked and enraged by Maddy’s fake curves that mimicked the hourglass shape of her icon.

Dr. Anthony Youn, a Troy, Michigan., plastic surgeon slammed Jackson for making Maddy “look like a stripper” and the pageant officials for allowing it.

“As a plastic surgeon and father I find this absolutely disgusting,” fumes Youn.

“Any parent who sexualizes a four year old needs to be evaluated by the Department of Social Services. The pageant organizers who allow this to happen should have their collective heads examined,” the surgeon says.

Dr. Matthew Schulman, a New York City plastic surgeon, called putting fake breasts and a behind on a 4-year-old “outrageous.”

“They are promoting her as a sexual object in these pageants, but to add C-cup boobs and buttocks on a small child is perverse,” he says.

“No matter how you look at it, it is unbelievable that a parent would do this and the pageant world would allow this.

“As a plastic surgeon, I am outraged and as the father of a toddler girl I am nauseated.”

Shulman adds that the padding may also result in psychological scars for Maddy by giving her “self-esteem and body image issues” that she’ll carry with her into adulthood.

And, watching the interviews and videos of Maddy and her mother, defending and even glamorizing the bizarre pageants, you come away wondering how this child will ever have a normal childhood. Her speech pattern is minimal for a four year old and her actions merely mimic what her mother has taught her. On the Today show, Maddy came on dressed like a cow girl while her mother sang the praises and value of child beauty pageants.

“You get money and toys,” she said proudly, as if these were to tow most important things in the world. In the meantime, young Maddy smiled, blew kisses, preened and wiggled as if she were a mechanical doll.

Editor’s Note:  Lynn Allison is a freelance reporter living in Boca Raton, Florida. She’s the author of several books including 1,001 Ways to Make Your Life Better and Natural Stressbusters for the Whole Family.

This article is reprinted by permission.