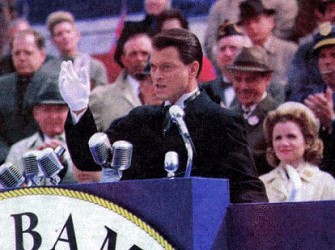 GEORGE WALLACE, a TV miniseries now on DVD, is a powerful, dramatic, but sometimes lewd insight into an extremely painful period in American history. It culminates in a tremendous Christian conversion scene.

The television movie opens in 1972 with George Wallace being ravaged sexually by his second wife Camilla. He breaks it off so he can go to a political affair.

Then, there’s a flashback to Wallace attending the Alabama inauguration of Governor Jim Folsom in 1955. Folsom’s niece is the little girl who becomes Wallace’s second wife after his first wife Elena dies. Folsom is a Bible believing man of the people. He tells Wallace that Wallace will succeed him, but Wallace loses the election because his opponent plays the race card. The KKK tells Wallace that, if he wants to get elected, he has to defend the whites.

The movie cuts back and forth between Wallace running for the presidency, the beginning of Wallace’s career, his confrontations with federal authorities as governor, and his life after being shot five times by an angry member of the crowd in 1972.

John Frankenheimer actually makes this complex plot structure work very well. The movie is also clear that Bobby Kennedy’s imposition of federal government control is not the answer to Alabama’s problems, including racism. During his racist period, Wallace seems totally blind to the pain and suffering he’s causing. Symbolizing this blindness is the black prisoner assigned to take care of the governor, named Archie. At one point, Archie even wants to kill Wallace.

When Wallace finally decides to go to Martin Luther King’s Dexter Avenue Church to repent, confess and accept Christ, it is an incredibly powerful conversion.

Gary Sinise as Wallace does a tremendous job. The production values are excellent. It is unfortunate there is too much foul language to recommend to teenagers and younger audiences, who would benefit from its Christian perspective.