Who Needs the Chinese? Hollywood! 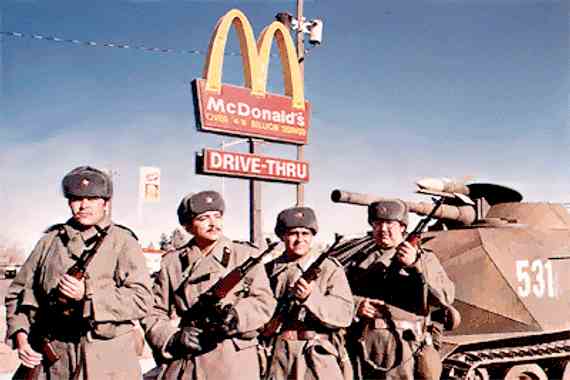 Don’t like your enemy? Bring in the graphic artists!

Remember the 1984 movie, RED DAWN, where bad guy Soviets attempt to invade the US, only to be stopped by a group of teenagers? Back in 2009, the collective creative minds at MGM Studios decided to remake RED DAWN, but they have a problem. There’s no Soviet Union any more, so they decided on another bad guy villain country, China.

Eagerly MGM shoots the movie and is ready to release it, but now they have another problem. In 2010, the Chinese box office brought in $1.5 billion dollars. That’s a lot of moolah. So, how is MGM going to

get a piece of that revenue with a movie where the Chinese are the bad guys? In fact, the movie would most likely not make its way into the country at all because of the tight censorship rules by the Chinese government.

This isn’t the only media project to change bad guy Chinese to bad guy North Koreans. The original writer and director for the first RED DAWN, John Milius, recently wrote a video game, “Homefront,” that had Chinese bad guys. But now those video game armies will not advance relentlessly as Chinese but as North Koreans.

So, if you don’t see any movies any time soon with bad guys from China, just figure that the accountants got to the script writer before it could make it to the cameras.