Will the Hollywood Entertainment Industry Follow the Detroit Auto Industry? 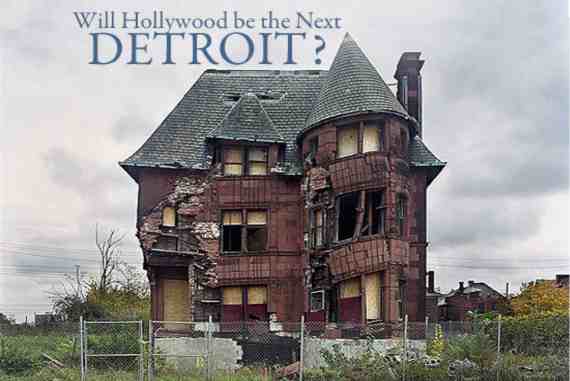 In 1955 GM, Chrysler and Ford sold 94.5% of all cars sold in America. They listened to the marketplace, and they reaped solid profits. In 1957, a recession resulted in increased sales of small, economical foreign cars. The automobile industry responded in


1959 by offering the Chevy Corvair, the Ford Falcon and the Plymouth Valiant. This slowed the tide of imports until the mid-1960s.

In the 1970s, the Detroit automobile industry tried to stave off a new round of imports with the Chevy Vega, the Ford Pinto and the AMC Gremlin. This time their effort failed. The foreign competition offered fuel-efficient cars of much higher quality. When the Arab oil embargo of 1973 hit, small car sales took off and the profitable big gas guzzlers the automobile industry loved to sell tanked.

The Detroit based automobile industry gave away a huge part of the auto market because they never really wanted it. Big cars had bigger profit margins and, to compete on small cars at small prices, the automobile industry produced cars that often started rusting before they were even sold.

Paul Ingrassia of the Wall Street Journal put it this way, “In all this lies a tale of hubris, missed opportunities, disastrous decisions and flawed leadership of almost biblical proportions. In fact, for the last 30 years Detroit has gone astray, repented, gone astray and repented again in a cycle not unlike the Israelites in the Book of Exodus.”

Lee Iacocca, once the CEO of Chrysler said, “All of us – Ford, GM, Chrysler – built a lot of lousy cars in the early 1980s. And, we paid the price. We lost a lot of our market to the import competition, but that forced us to wake up and start building better cars.”

By 2009, the American market share of the big three hit 43%. The impact on the city of Detroit has been catastrophic, to a large degree according to economists because the government of Detroit turned to socialist serfdom that seriously aggravated the decline. Once the wealthy capital of America’s proudest industry, it has begun to crumble shamefully trapped in a socialist serfdom.

The Lesson for the Hollywood Entertainment Industry

The Hollywood Entertainment Industry dominates the production of movies and television programs. Ninety-five percent of American box office comes from the output of the six major Hollywood studios and their subsidiaries. They literally squeeze out any competition by demanding theater screens all year in exchange for the right to show their biggest movies.

Even so, in the 1960s the moral Motion Picture Code was replace by the anything-goes MPAA rating system. The Entertainment Industry dove into a period of wild excess with MIDNIGHT COWBOY, A CLOCKWORK ORANGE and many other grossly offensive movies. Television increasingly became a tool used by producers for regressive socialist indoctrination. The new book PRIMETIME PROPAGANDA by Ben Shapiro actually quotes several prominent liberal television producers boldly confessing their socialist anti-family agenda.

This kind of arrogance invites competition, just as the automobile industry’s arrogance created a huge opening for foreign car makers. If there was an Entertainment Industry executive as honest as Lee Iacocca, he or she would step up and admit, “We’ve made a lot of lousy movies.”

If the Entertainment Industry wishes to focus on serving HANGOVER 2 fans, some new center for movie production would be wise to avidly serve audiences hungry for wholesome family entertainment. Detroit is not the only city where cars can be made, and Hollywood is not the only place to make movies.

For decades the thing stopping this from happening has been the major studios’ stranglehold on theater screens. It’s as if foreign car-makers were not allowed to open dealerships.

Now, the Entertainment Industry is in the process of killing the theater business. They’re constantly forcing prices up and shortening the window between theatrical release and the home viewing market. Even network television and DVD sales are falling. The market that’s growing rapidly today is video on demand. In the future, you can expect it to become the primary way people purchase entertainment. It’s already become the most popular way to buy music.

The Entertainment Industry in Hollywood may continue to be the only place with the resources to make expensive animation and special effects extravaganzas, but good movies can now be made anywhere.

Look for the day when a blockbuster movie bypasses theaters entirely. Theaters may miss the opportunity to sell a lot of popcorn because they’re forced to serve the Hollywood Entertainment Industry rather than the audience.

The Honda of Entertainment: Improving The Product

The key to doing to Hollywood Entertainment Industry what Honda and Toyota did to Detroit is to consistently make great movies that appeal to the audience the Hollywood Entertainment Industry underserves and find a new method of marketing and distribution – one that’s not dominated by the studio system. That’s a tall order, but what Honda and Toyota did to the Detroit automobile industry was a tall order.

When Mel Gibson was turned down by the major studios and produced THE PASSION OF THE CHRIST without them, he sent shock waves through the industry. The resulting huge box office left the Entertainment Industry wondering how it could compete for this audience without actually embracing the values the audience appreciates. The Entertainment Industry responded by creating subsidiaries to serve the “faith” market and dabbling in the production of a few small movies.

Some in the Entertainment Industry continue to be surprised by the success of movies like THE BLIND SIDE that actually portray Christians in a favorable light. To their credit, and their profit, they have cut back the vulgarity and immorality in many of their big movies but they’re just not thrilled about making movies for those they consider their cultural and political enemies.

Christians interested in producing movies that can compete with Hollywood would be well served to attend one of Movieguide® Founder and Publisher Dr. Ted Baehr’s four-day seminars on scriptwriting. In great detail, he covers the subject from the wise perspective that moviemaking is both an art and a business. If you fail at either, you fail. As the son of a Hollywood movie star and Chairman of the Christian Film & Television Commission®, Dr. Baehr knows both the industry and the Christian audience.

The Honda of Entertainment: Marketing

The major studios spend countless millions marketing their movies. Much of that is spent on television advertising (which helps fund more Hollywood Entertainment Industry television production).

A Honda of Entertainment will produce and market movies at a much lower cost than the major studios. It costs the Entertainment Industry too much. Like Detroit in the auto industry, the current major studio system is burdened by massive overhead and costly union contracts.

The Honda of Entertainment will find much less expensive ways to market movies. The Internet offers many sites that attract members of the audience Hollywood grossly underserves, including sites that offer the Bible online.

One such site, of course, is www.movieguide.org, with its twice weekly Movieguide® eNewsletters. Movieguide.org serves parents and children looking for wholesome entertainment. As the audience for movieguide.org continues to increase, so too will its ability to inform very large audiences interested in wholesome uplifting movies.

The Honda of Entertainment: Distribution

The Entertainment Industry also spends millions producing 35mm and digital prints to run on 3,000 screens opening weekend. This is an investment the Honda of Entertainment can avoid if the plan is to bypass theaters. While a theatrical opening may be the traditional method for any move considered a serious production, the current price of doing so is to partner with a Hollywood subsidiary that will take almost all the income generated.

More modern methods of distribution offer a filmmaker a much higher percentage of revenues. After modest set-up fees, movies that sell on iTunes for $9.99 pay the seller $7. On Amazon.com a seller gets 50%. Don’t be surprised if movieguide.org one day hosts a movie sales and rental service that pays sellers a generous percentage.

Netflix offers to negotiate a license fee to stream your video on demand to their millions of customers. Obviously, the better known the movie, the higher the license fee they’ll pay. This might be something to investigate after earning a generous income from other means first. The Christian movie LETTERS TO GOD, for example, is now available on Netflix.

A Honda of Entertainment will probably earn a great reputation by distributing through multiple means and then developing their own “dealership” where an opening month “exclusive” gives them 100 percent of the revenue.

If the Honda of Entertainment becomes popular enough, theaters may even approach them about opening with a theatrical release (without a Hollywood Entertainment Industry middle man to syphon off profits). After all, theaters want to sell popcorn and, if Honda puts a lot of people in the seats, many will stop at the concession stand.

For the Honda of Entertainment to take noticeable market share from Entertainment Industry, they must follow the Pixar model. Every product they make must be excellent. They need large and growing audiences to look forward to their next release. They need a brand name people trust.

The concept of “entertainment value” is key. The Entertainment Industry has put theaters in a terrible bind because they’ve increased the entertainment value requirements of parents wishing to take two children to a movie. A movie must provide more than $50 worth of entertainment value or it becomes another reason to quit going to theaters and wait for the price to come down. Red Box and Netflix make waiting very tempting.

If Christian filmmakers intend to provide high entertainment value, they must get past the small drama phase. Fortunately, you don’t have to spend $100 million on special effects to do so.

Movies like THE SOUND OF MUSIC provided such high entertainment value that many people paid to see the movie multiple times, bought the VHS tape and then bought the DVD.

If the Honda of Entertainment can consistently provide $60 worth of wholesome uplifting entertainment for $9.99, it will build a base of devoted repeat customers.

There will be plenty of room for the Toyota, the Hyundai, the BMW, and the Jaguar of entertainment. If several companies outside the major studios consistently make good money providing quality wholesome entertainment, the Hollywood Entertainment Industry will no doubt respond by making some wonderful big-budget movies that appeal Christians.

Who knows, one of the big six could even come under the control of someone passionate about making wholesome uplifting entertainment. They could make some big money. It’s a lot easier to sell an American movie overseas than an American car.

That is a win-win and redeeming the media.