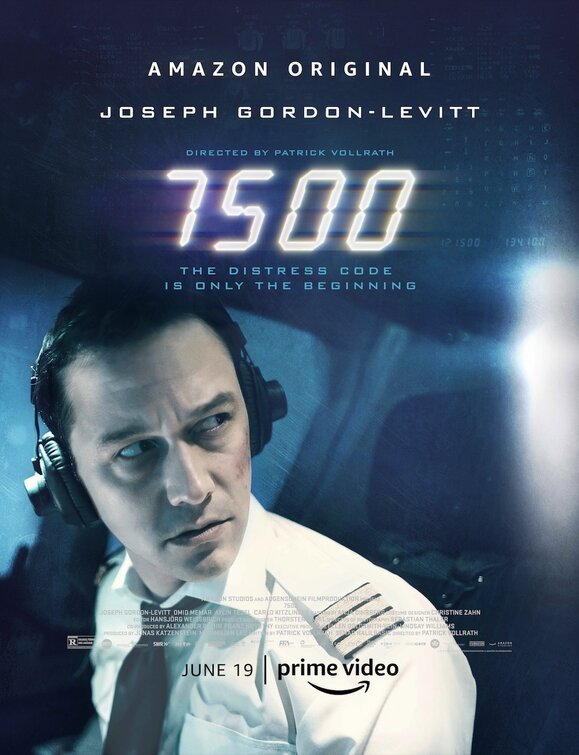 7500 stars Joseph Gordon-Levitt as Tobias, an American co-pilot on a German flight to Paris. The movie reveals that Tobias lives with one of the flight attendants and that she’s the mother of their 2-year-old son. In the air, some Muslim terrorists try to storm the cockpit when the other attendant delivers food to Tobias and the German pilot. One terrorist, armed with a makeshift knife made from a whiskey bottle, gets through and manages to kill the pilot and wound Tobias in the arm, but Tobias knocks him unconscious with the fire extinguisher. The stakes get raised when the terrorists in the passenger compartment threaten to kill passengers unless Tobias opens the cockpit door.

Some may find fault with some of the co-pilot’s actions in 7500. However, 7500 is a powerful thriller with a strong moral, anti-terrorist worldview. It shows the evil of Muslim terrorism. Regrettably, 7500 contains about 28 mostly strong obscenities, including many “f” words. Also, though the violence isn’t extremely gory, it’s strong and includes some bloody images. Finally,7500 contains some dark and sad moments. So, MOVIEGUIDE® advises extreme caution.

(BB, FR, H, LLL, VVV, M):
Dominant Worldview and Other Worldview Content/Elements:
Strong moral worldview where the American co-pilot of a German flight to Paris tries to stop some Muslim terrorists from crashing his plane and killing passengers to force the co-pilot to open the cockpit door and co-pilot convinces one terrorist to turn against his fellow terrorists who want to crash the plane in an urban area, and the “traitorous” terrorist just wants to save his own skin and not get punished, however
Foul Language:
28 mostly strong obscenities, one light profanity, and a terrorist is heard urinating in a corner of the cockpit
Violence:
Very strong intense violence with bloody images includes Muslim terrorists storm passenger plane cockpit, one terrorist uses a makeshift knife made out of a glass whiskey bottle to stab the pilot in the stomach multiple times and stabs the co-pilot in the left arm, co-pilot fights and struggles with two terrorists and uses a fire extinguisher to knock one terrorist unconscious, co-pilot is knocked unconscious, one terrorist decides he wants to live and stops his compatriot from crashing the plane by stabbing him, terrorist holds makeshift knife at co-pilot’s neck, and one man is shot dead
Sex:
No sex, but flight attendant kisses co-pilot and it’s revealed that they are living together and have a 2-year-old son
Nudity:
No nudity
Alcohol Use:
No alcohol use, but a man is shown buying some whiskey bottles at an airport store in the area ahead of the area where passengers go through Security
Smoking and/or Drug Use and Abuse:
No smoking or drugs; and,
Miscellaneous Immorality:
Terrorists hijack a plane and want to crash it into an urban area to kill lots of people.

7500 is an extremely intense, edge-of-your-seat thriller about an American co-pilot on a German flight to Paris who has to defend his plane from Muslim suicide hijackers who kill the pilot and threaten the flight crew and passengers, including the co-pilot’s common-law wife, the mother of their 2-year-old son. Though some of the co-pilot’s behavior may be unrealistic, 7500 is a powerful, riveting thriller where Muslim terrorists are clearly the bad guys, but the movie contains lots of foul language, including many “f” words, some very strong, intense violence with bloody images, and some sad, dark moments.

The movie stars Joseph Gordon-Levitt as Tobias Ellis, the American co-pilot on a flight from Berlin to Paris. The movie opens with a couple suspicious passengers buying three bottles of whiskey after the security check and showing up in the waiting area with a mysterious backpack. Other than that, the flight seems normal as Tobias enters the cockpit and meets the pilot, Michael. The movie also reveals that one of the flight attendants, Nathalie, is Tobias’ live-in girlfriend and the mother of their 2-year-old son.

The plane takes off from the runway. Then, as another stewardess delivers food and water to Tobias and Michael, several hijackers armed with knives made of whiskey glass storm the cockpit. Michael and Tobias fight all but one of them out of the cockpit and close the door. During the melee, Tobias gets stabbed in his left arm, and the remaining hijacker takes his makeshift glass knife and plunges it repeatedly into Michael’s stomach. However, Tobias comes to his senses and knocks the hijacker unconscious by hitting him in the head with a fire extinguisher.

Tobias attends to his wound and tries to help Michael, but Michael is losing blood and is having trouble remaining conscious. Tobias gets on the headphones and tells ground control what happened, and they tell him to head for Hanover Airport. He then ties up the unconscious hijacker with tape from the medical kit and buckles him into the empty chair in the cockpit. Meanwhile, the hijackers in the passenger area keep banging on the cockpit door trying to force it open.

Some may find fault with some of the American co-pilot’s actions in 7500. The most egregious one is that Tobias lets the hijackers kill one of the passengers before he threatens to kill the unconscious hijacker in the cockpit if they kill anyone. Of course, when Tobias finally gets around to threatening the unconscious Muslim terrorist’s life, the head hijacker in the passenger compartment calls his bluff and says go ahead and kill him.

Despite this and other possible plot questions, 7500 is a powerful, riveting thriller. It’s well-written, well-acted and well-directed, with brilliant editing and cinematography. Viewers will side with the co-pilot’s efforts to save the passengers and stop the kidnappers from killing more people. Also, the movie shows that the bad guys are heartless Muslim terrorists. Although the co-pilot manages to appeal to the youngest terrorist’s humanity and get him to turn on his compatriots, the young terrorist has still been warped by his Muslim ideology. Eventually, he just decides to save his own skin, but he doesn’t want to get punished for anything he did. A really good decision by the filmmakers is their choice not to translate the terrorists’ Arabic references to Allah into “God” in the English subtitles. As we know, Allah can’t be translated into God in English. Allah is not the same god as the God of the Bible, but a false deity invented by the Mohammed from old references to the “Father of All” in Middle Eastern cultures. When Muslims shout, “Allahu akhbar,” they are really saying that a false god, Allah, “is the greatest.” The phrase has absolutely nothing to do with the real God who created human beings.

Regrettably, 7500 contains about 28 mostly strong obscenities, including many “f” words. Also, while the violence isn’t extremely gory, it’s very strong and intense. The movie only implies that the terrorists slit a couple people’s throat, but it does show the co-pilot’s bloody wound on his left arm, his bloody head wound and the pilot’s bloody shirt where he was stabbed several times in the stomach. 7500 also contains some sad, dark and intense moments as the terrorists start to threaten and kill passengers. So, MOVIEGUIDE® advises extreme caution.