"Poking Fun at the Left" 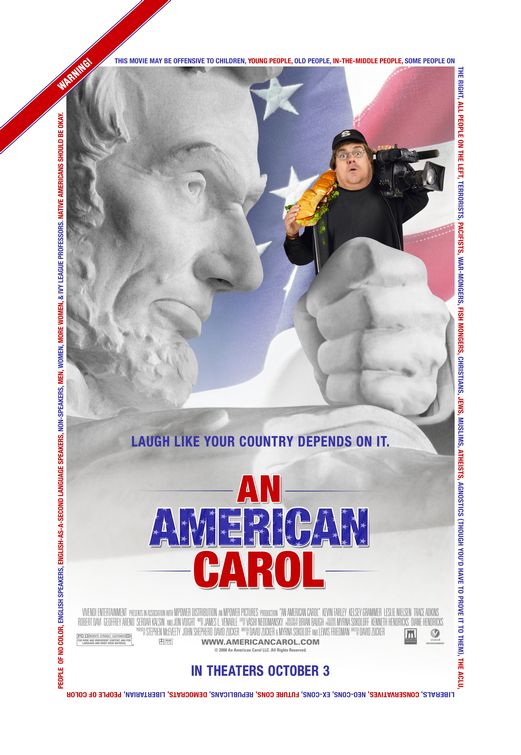 AN AMERICAN CAROL takes on the liberal establishment by targeting leftwing filmmaker Michael Moore’s propaganda documentaries. Kevin Farley plays Michael Malone, a left-wing documentary filmmaker. Malone is leading a movement to abolish the Fourth of July. A Muslim terrorist and his two henchmen offer to finance a fiction movie Malone wants to make, titled FASCIST AMERICA. One night, President John F. Kennedy walks through Malone’s TV set. He tells Malone that three spirits will visit him, to show him what a great country the United States really is. The first spirit to visit Malone is General George S. Patton.

Like many spoofs, AMERICAN CAROL is hit-and-miss, but it is still very entertaining and funny to see liberals and leftists being skewered for a change. Besides crazy comedy, the movie has stirring patriotic moments, as well as some positive references to God. Farley does a good job carrying the movie, and Kelsey Grammer is very amusing as Gen. Patton. The movie contains plenty of foul language, however, and some irreverent sexual references, including a few homosexual jokes. Therefore, MOVIEGUIDE® advises strong caution. This is not a movie for susceptible children – young or old.

(BB, PPP, ACAC, C, Pa, Ho, O, LLL, VV, S, N, A, DD, M) Strong moral worldview with very strong pro-American and strong anti-Communist content celebrating the USA and its history and military forces, plus some light Christian references to churches and faith and positive references to God, set in a comical context, but with an irreverent tone that includes some vulgarities, including sexual jokes, a few with homosexual references, plus man sees and talks with three ghosts but this could be a dream or a vision within an unbelievable story being told by a crazy grandfather to his grandchildren; about 30 obscenities (including about three in the mouths of children), one strong profanity by a Muslim terrorist and nine light profanities, plus several obscene gestures; some strong comical violence with some blood when people shoot and kill liberal zombies, plus a lot of light slapstick violence; a group of men in uniform line up outside of a woman’s house, implying that she is sexually promiscuous with such men, plus passionate kissing and some other sexual jokes, including a few with homosexual content; upper and rear male nudity in two scenes; alcohol use; no smoking but some brief drug references in a comical setting; and, lying and some poking fun at people’s handicaps.

The movie stars Kevin Farley as Michael Malone, a left-wing director who makes documentary movies. The story opens with Malone shooting a movie in Cuba. He waxes enthusiastically about that Communist country, but when he starts to sail his fancy raft back to the U.S., all the Cubans jump into the water to hitch a ride with him.

Back in the States, Malone is leading a movement to abolish July Fourth patriotic celebrations. His nephew, who’s just joined the Navy, asks Malone to come to his July 4 picnic, but Malone declines.

Meanwhile, a Muslim terrorist and his two henchmen offer to finance a new fiction film Malone wants to make, called FASCIST AMERICA. One night shortly thereafter, Malone is watching footage of President John F. Kennedy’s inaugural address. JFK walks through the TV set to tell Malone that three spirits will visit him, to show Malone what a great country the United States really is. The first spirit is General George S. Patton, played by Kelsey Grammer.

As Gen. Patton shows Malone the greatness of the good ol’ USA, Malone begins to have second thoughts about his knee-jerk liberal politics.

AN AMERICAN CAROL is a conservative movie directed by David Zucker, a former liberal who, with his brother, did the AIRPLANE! movies and THE NAKED GUN series with Leslie Neilsen. Neilsen actually narrates the story in AMERICAN CAROL, giving it a fractured fairy tale quality.

Like Zucker’s previous work, AN AMERICAN CAROL has a hit-and-miss quality, but it is very entertaining and amusing to see a movie that finally makes fun of liberals, radical leftists, hippies, peaceniks, and Democrats for a change. Farley does a good job of carrying the movie, and Grammer is very funny as Gen. Patton. One of the funniest sequences involves ACLU lawyers who look and behave like zombies from a horror flick by George Romero. There were also some good jokes about the crazy ideology of Muslim terrorists. AMERICAN CAROL also has some stirring patriotic scenes. The best of these is when Jon Voight appears as President George Washington to give some powerful advice to the young leftist filmmaker. Voight’s cameo adds a strong serious tone to the movie’s political targets.

The movie contains plenty of foul language, however, and some irreverent sexual references, including a few homosexual jokes. The biggest problem, perhaps, is that two of the nephew’s children call their left-wing uncle a dirty name several times.

Thus, MOVIEGUIDE® advises strong caution, mostly due to the amount of crude language. AN AMERICAN CAROL is not a movie for susceptible children – young or old.