"The Movie Itself Is the Real Heartbreaker" 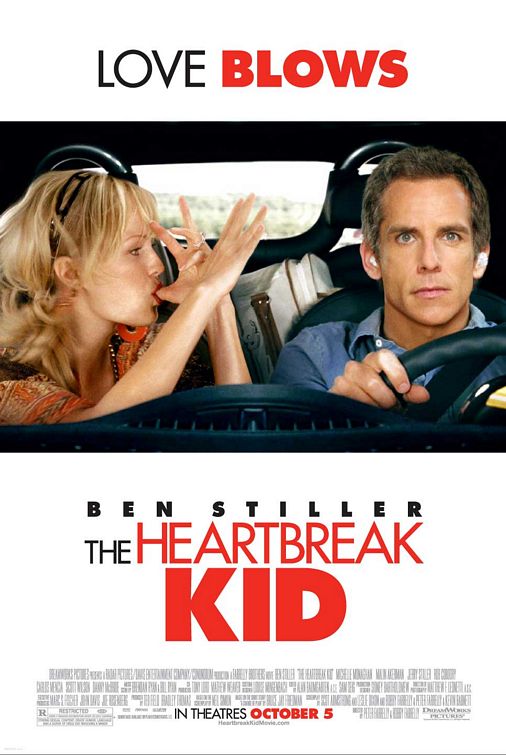 THE HEARTBREAK KID stars Ben Stiller as a sports storeowner named Eddie Cantrow. After years of bachelorhood and pressure from his father, Eddie wonders if he’ll find the right woman. So, when a chance encounter with an alluring blonde played by Malin Akerman leads to instant romance, Eddie decides he can’t be too choosy. They quickly marry. Right after the wedding, Eddie realizes he's made a terrible mistake. After reaching their exotic Mexican hideaway, he unexpectedly falls in love with Miranda (played by Michelle Monaghan). Eddie charms and lies to Miranda and her family to pick her up. His plan backfires when his new wife gets suspicious and the resort’s many other guests observe him with two different women.

The premise for this movie is that if you marry the wrong person for the wrong reasons, then just find someone else – even if that means cheating on your wife during your honeymoon. Adultery is justified and marriage is degraded. The movie also says that whenever you get into trouble, lying is the best solution. THE HEARTBREAK KID contains extremely crude sexual content, abundant foul language, perverted jokes, and explicit nudity.

(PaPaPa, Ro, HoHo, PC, LLL, V, SSS, NNN, AA, DD, MMM) Very strong pagan worldview justifying adultery and lying, plus protagonist is led by his heart instead of logic or morality, homosexual jokes and references, and a critical representation of the Border Patrol agent; about 71 obscenities, including 14 “f” words and other sexual perverted words and references, and at least 11 mostly light profanities, including several uses of GD; some comic violence such as slapping and hitting during a sex scene, a comical fight between three men with punches thrown, man hit with rifle butt and bat, and a depiction of a border patrol agent assaulting an illegal alien; strong sexual content includes several explicit sex scenes, each between a married couple, but very much disturbing and NOT romantic, crudely implied bestiality in two scenes, implied plus numerous vulgar sexual references and jokes, including homosexual ones; full female nudity, side male nudity, multiple upper female nudity, and explicit animal nudity in bestiality reference; several drinking scenes, one depicting excessive use; references to cocaine use and depicted use of marijuana; and, racial stereotyping, negative jokes; lying, justifying adultery, lying to spouse, degrading marriage, sexual promiscuity encouraged, bad role models to teenagers in movie.

THE HEARTBREAK KID stars Ben Stiller as a sports equipment store owner named Eddie Cantrow. After years of bachelorhood and constant pressure from his father, Doc (Jerry Stiller), and best friend Mac (Robert Corddry), Eddie starts to wonder if he’ll ever find the right woman to marry. So when a chance encounter with an alluring blonde, Lila (Malin Akerman), leads to an almost instant romance, Eddie decides he can’t be too choosy anymore, and they quickly get married. Right after the wedding, as the newlyweds get to know each other on the drive down the California coast, Eddie begins to realize he’s made a terrible mistake.

The newleyweds reach their exotic Mexican hideaway, where Eddie unexpectedly meets and falls in love with Miranda (Michelle Monaghan). The only catch is that Miranda has no idea that Eddie is married, and especially not that he is on his honeymoon. Eddie lies to and charms Miranda’s family just for the chance to try and pick her up. His plan backfires as his new wife gets suspicious and many other guests at the resort begin observing the strangeness of seeing Eddie with two different women.

The thing that will stop many viewers from making a connection with the film is that it is hard to really feel sorry for the main character, Eddie. His poor decisions and rationale for getting married set him up for failure and doesn’t make the audience want to pull for him. He is far from the good guy hero that tugs on the audience’s heart and makes them hope that things really go his way. Adding to the merely average acting and poor quality of the directing is the poor taste of the directors, the Farrelly brothers, which is illustrated all too clearly with the intense profanity, sexual perversion, crude humor, nudity, and overall immoral and disgusting content.

The premise of the story for this film is that if you marry the wrong person for the wrong reasons, then just find someone else – even if that means trying to cheat on your wife during your honeymoon. Adultery is justified and marriage is degraded. Also, whenever you get in trouble or make a mistake, lying is the best solution for your problems. On top of these immoral lessons by the Farrelly brothers, the movie is full of sexual references and innuendos, excessive foul language, perverted jokes and crude words, nudity, sex, inappropriate racial comments, drinking, and drug use. It leaves you going home with a sick feeling for having been exposed to such vile content for the past two hours.

Anyone with a conscious will want to avoid this movie at all costs and send a message to the studios that the public will not support a movie that distorts and fails at an attempt at comedy with such a reprehensible plot and immoral content.