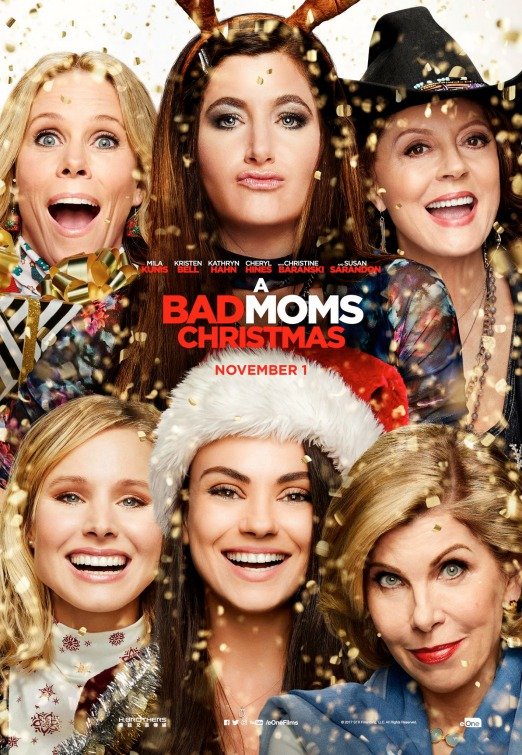 A BAD MOMS CHRISTMAS finds the three “bad moms,” Amy, Kiki and Carla, trying to cope with the pressures of putting on a happy family Christmas while dealing with their own problematic mothers. Amy’s mother is a perfectionist who wants to celebrate Christmas with all the trimmings. Kiki’s mother hovers constantly around her. Carl’s mother usually just wants money from her. Eventually, Amy’s conflict with her mother comes to a head, and Amy goes too far. Can she fix the situation and restore the joys of Christmas for her own two children?

A BAD MOMS CHRISTMAS is filled with funny, crowd-pleasing comical vignettes. Some of them are relatively clean and fun, but many of them contain at least some, and often plenty of, lewd, outrageous content. For example, there are two very suggestive dance scenes featuring a professional male dancer. Also, despite some surprisingly heartfelt moments revolving around the joys of family Christmas gatherings, the movie’s obscene, crude language and lewd situations overwhelm its good intentions and positive Christmas elements. So, MOVIEGUIDE® deems A BAD MOMS CHRISTMAS unacceptable for media-wise moviegoers and their families.

Dominant Worldview and Other Worldview Content/Elements:
Strong mixed pagan worldview with lots of immoral, crude pagan behavior mitigated by a positive Christian, moral premise where the plot problem is resolved in a church with a choir singing a Christmas hymn/carol and Christmas and family are extolled, plus some brief irreverent humor.
Foul Language:
At least 91 obscenities (many “f” and “s” words and crude words for private parts), four strong profanities and 35 light profanities.
Violence:
Comic violence includes falling and hitting during dodge ball game on trampolines, pratfalls, angry woman rips down Christmas decorations, two women fight over Christmas tree, a few groin hits.
Sex:
no depicted sex but married couple in bed are kissing when they notice mother-in-law is sitting in the darkened room, crude references to waxing hair from women and men’s private parts and groin areas, very suggestive dancing during two male dancer sequences and another dance sequence with the cast over credits, comical references to male erections, a comical reference to female self-abuse, lewd language for male and female private parts.
Nudity:
Upper male nudity in male dancing sequences, women ogle bulge in male dancer’s bikini bottoms, a couple comical references to oral sex, and cookie shaped like a male organ appears in a couple scenes.
Alcohol Use:
Alcohol use and drunkenness.
Smoking and/or Drug Use and Abuse:
No tobacco but comical references to marijuana smoking by two adults.
Miscellaneous Immorality:
Women con people out of their Christmas goodies as they come out of a store (they pretend they’re taking food donations for the poor), older woman tries to hide party from her daughter, grandmother showers two children with fancy gifts, references to gambling addiction of one woman’s mother, helicopter parenting, and mother only visits her daughter when she needs money.

A BAD MOMS CHRISTMAS finds the three “bad moms,” Amy, Kiki and Carla, trying to cope with the pressures of putting on a happy family Christmas coming from their own three mothers. A BAD MOMS CHRISTMAS is a crowd-pleasing comedy with some surprisingly heartfelt moments centered on the joys of family Christmas gatherings, but the frequent obscene, crude language and some lewd situations overwhelm the movie’s good intentions.

As the movie begins, Amy, played by Mila Kunis, is sitting unhappily on the stairs in her house, pondering the destruction around her. The Christmas tree has fallen to the ground, as have all the decorations in her living room. In voiceover, Amy says that, sadly, she has just ruined Christmas for her family.

Cut to five days before Christmas Eve. Amy learns that her hyper-critical mother, Ruth, and her father are coming over to visit during Christmas. Amy wanted to have a more relaxed Christmas celebration for her two children, her new boyfriend and his daughter. However, her mother is a perfectionist who wants to celebrate Christmas with all the trimmings, including a fancy Christmas Eve party.

Meanwhile, Amy’s friend, Kiki, is trying to endure her helicopter mother, who likes to hover over Kiki morning, noon and night. Also, Amy’s friend, Carla, is upset to find that her gambling addicted mother, Isis, has suddenly showed up on her doorstep. Carla suspects that the only reason her mother showed up is because she needs some money.

Amy, Kiki and Carla get together at the local mall, where they commiserate with one another about their troubled relationships with their own mothers. They decide to take a break and throw down some booze. They also decide to “take back Christmas” from their mothers. That’s easier said than done.

A BAD MOMS CHRISTMAS is filled with crowd-pleasing comical vignettes, but many of them contain some or plenty lewd, outrageous content. Perhaps the cleanest of the vignettes, and one of the funniest, is a visit to a foam rubber indoor amusement centered called The Fun Zone. All the children and all the adults take part in bouncing on trampolines, playing with foam rubber blocks and playing dodge ball. It’s a joyous, hilarious scene.

The movie also has some surprisingly heartfelt moments centered on the joys of family Christmas gatherings. Eventually, Amy’s conflict with her mother comes to a head. Her mother decides to hold a fancy Christmas Eve party against Amy’s wishes, but Amy tears down all her mother’s fancy decorations and tells her to leave. This upsets her two children, and Amy realizes she’s ruined Christmas for her family. Never fear, however. Amy and her mother reconcile at her mother’s church during a Christmas Eve service with a special Christmas choir. Kiki and Carla’s mothers are also in the church with Amy’s mom, and the reconciliation between Amy and Ruth helps them reconcile with their own daughters. Thus, the resolution of the plot problem in A BAD MOMS CHRISTMAS is, in a very real sense, a Christian one centered on Christmas and family.

Despite this positive premise, however, A BAD MOMS CHRISTMAS is filled with obscene, crude language. It also contains some very suggestive dancing by a muscular male dancer named Ty, whom Carla meets at the spa where she works when Ty asks her to wax his private parts. Also, there’s a scene where Kiki catches her mom sitting in the dark in her bedroom while Kiki and her husband start to make love on their bed.