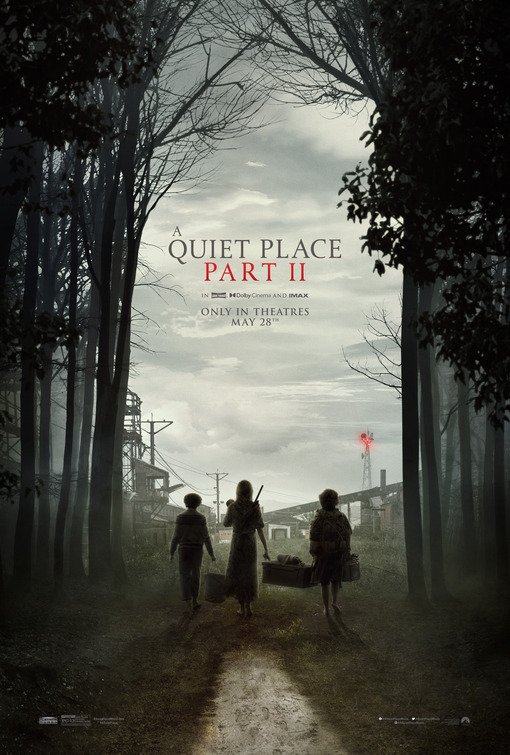 (BB, L, VV, A, M):
Dominant Worldview and Other Worldview Content/Elements:
Strong moral, prolife worldview with redemptive content promotes family, parenthood and risking your life to save other people from deadly, desperate situations
Foul Language:
Two “h” obscenities, one JC profanity, two light profanities
Violence:
Strong, intense, scary but not graphic or really bloody violence where scary, large, insectoid, screeching alien monsters chase and hunt and threaten and kill people, woman has to drive a car backwards to avoid a large bus with one of the monsters barreling down toward her car, alien monsters drag two or three people off, people shoot several alien monsters with rifles/shotguns and a pistol, two children disorient two or three monsters with amplified and reverberating sound, boy steps into a bear trap and his ankle is bloodied, boy and a baby start to suffocate when being trapped in a large boiler with limited air, scavengers grab a teenage girl and restrain a man protecting her, man falls into ocean and is threatened by an alien monster, alien monster slashes woman’s leg with a claw, and children are placed in scary situations involving vicious alien monsters
Sex:
No sex
Nudity:
No nudity
Alcohol Use:
Brief alcohol use
Smoking and/or Drug Use and Abuse:
No smoking or illicit drugs; and,
Miscellaneous Immorality:
Scavengers harass and threaten a man and a teenage girl.

A QUIET PLACE PART II is the edge-of-your-seat follow up to the popular 2018 science fiction thriller, with Evelyn, whose husband sacrificed his life to save his family in the first movie, trying to protect her three children, including an infant, from scary alien monsters who hunt by sound. A QUIET PLACE PART II is a visceral, gripping, ultimately uplifting thriller that never lets up, but there is some brief foul language and many scary, intense moments, so MOVIEGUIDE® advises caution for younger, sensitive viewers.

The movie opens on the day that the aliens appeared in Lee and Evelyn Abbot’s small town in Upper New York State. It looks like the whole town is at a Little League baseball game, where their son, Marcus, is up to bat. Everything stops when a fiery meteor streaks across the sky. All the people start to leave, and the family gets separated into Evelyn’s car and Lee’s truck.

Suddenly, some large insect-looking alien monsters start attacking and killing the townspeople. Lee soon figures out that the aliens are blind but have an acute sense of hearing. This is beneficial to his family, because the whole family has learned sign language because Lee’s daughter, Regan, is deaf, with a cochlear hearing implant. Eventually, Lee, Evelyn, who’s pregnant, and their three children are able to escape the alien attack.

Cut to 47 days later. Lee and his youngest son, Beau, have died (as depicted in the first movie), but Evelyn has had her baby. To keep the baby quiet so that the alien monsters can’t hear him, Evelyn has constructed a basket with an oxygen tank for the baby. Evelyn, the baby, Marcus, and Regan are walking quietly toward a smoke plume in the distance.

Evelyn accidentally hits a tripwire, which triggers an alarm of glass bottles. The family starts to run but Marcus steps into a beartrap that grabs his leg. An alien starts to approach them, but Regan uses a radio microphone connected to her cochlear implant that emits a screeching sound. The sound disorients the alien monster long enough for Evelyn to shoot it dead.

A second alien approaches, however, and the family tries to run, but they’re stopped by a man named Emmett, whom the family knew back in town. Picking up Marcus and carrying him fireman style, Emmett helps them escape the alien by finding refuge in a large boiler he’s rigged with a thick towel, so that the boiler door won’t shut completely. The boiler is soundproofed, and the alien soon leaves.

Emmett tells Evelyn they can’t stay with him because there’s not enough food. He wants them all gone by morning, but it’s clear that Marcus can’t walk on his wounded leg.

Meanwhile, Regan discovers that the radio she has is playing Bobby Darin’s classic 1959 rendition of “Beyond the Sea.” Emmett tells her the song has been playing repeatedly day and night. Looking at a map they have, Regan sees that there’s an island just beyond the coast. Perhaps it’s a signal from some survivors on the island, she tells her mother and Emmett. Regan wants to walk there and see if that’s the case, but Evelyn forbids it. During the night, however, Regan slips away and starts walking toward the island’s location.

The next morning, Evelyn pleads with Emmett to bring Regan back, but he refuses. Emmett, whose wife has since died, says people have changed and shown their true colors. There’s no one worth saving anymore, he tells her. Regan is worth saving, Evelyn assures him.

Emmett agrees to bring Regan back. He reaches Regan just in time to help her fight off another alien monster. However, they run into trouble when they get to the coastal bay across from the island.

Meanwhile, Evelyn decides to return to town alone because Marcus won’t survive much longer without some more pain medication to keep him quiet. While she retrieves the medicine, Marcus starts to explore the factory. He accidentally makes some noise and attracts another alien monster. Can Evelyn make it back in time to save her son and the baby, who’s running out of oxygen? Can Emmett and Regan survive more alien attacks and a group of human scavengers along the seashore?

Like the first movie, A QUIET PLACE PART II is another instant classic full of intense jeopardy and scary suspense. Starting the movie by going back to the first day the aliens appear is a great choice. It lets the viewers see the father once again and connect to the trauma that the family has suffered because of his death. The third act leads to a powerful, slam-bang finish that intercuts between the danger the mother, her son and the baby face at the abandoned factory with the danger that Emmett and Regan face on the coast. The two sequences are brilliantly edited together by John Krasinski of television’s THE OFFICE, who wrote the screenplay, directs the movie and plays the father again. Krasinski cleverly links the two sequences at the end with an exhilarating, bravura flourish of sight, sound and music. It’s the perfect ending to a nearly perfect movie. D.W. Griffith, the “father” of such exciting cross-cutting techniques more than 100 years ago in Hollywood, couldn’t have done any better.

A QUIET PLACE PART II isn’t a didactic movie, much less a preachy one. Except for Evelyn’s comment that her daughter is a person who’s worth saving, the movie’s themes and messages are conveyed by the action instead of the dialogue. As such, the movie tells a pro-life message that promotes family, parenthood and risking your life to save other people from deadly, desperate situations.

A QUIET PLACE PART II does contain, however, some brief foul language, violence and many scary moments. So, MOVIEGUIDE® advises caution for older children and other sensitive viewers.