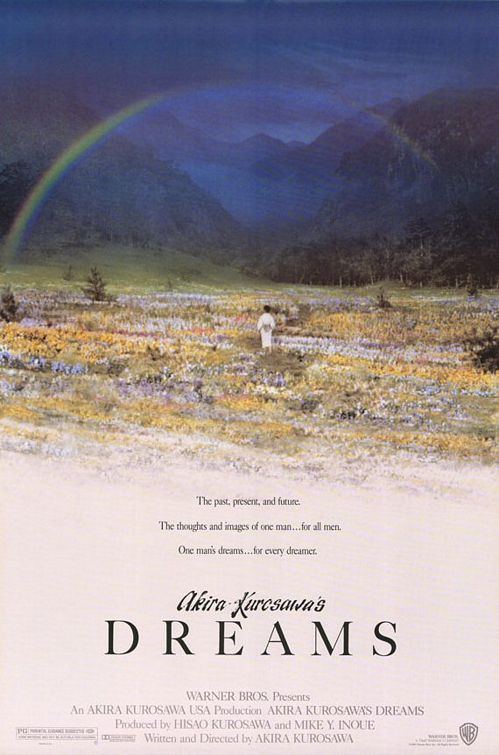 DREAMS is a vivid cautionary allegory about the fate of mankind and the planet. The two-hour feature involves eight separate dream sequences from director Kurosawa’s own slumber: one from his childhood, another from adolescence and the remaining six from his adult life.

The stories run the gamut from the lyrical to the nightmarish. The film maker’s overriding concern in them is man’s current abuse of nature, the fear of nuclear holocaust and its aftermath. There are also excursions into other fantasies, but the main motifs are a nostalgic cry for a way of life that respects nature and an emphatic, anguished struggle against the death, both of the individual and the planet.

The first dream, “Sunshine Through the Rain”, has a small Japanese boy, warned by his mother not to leave the family house, venturing into the sun-streaked forest during a rainstorm. He secretly observes a wedding procession of human foxes, walking two by two in extraordinary costumes through silver streaks of rain. Thus, the segment, heavy in symbolism, establishes the range of fantasy possible when one invests fully in the vividness of nature.

The theme is carried over into the next dream, “Peach Orchard”, in which a boy chases a girl into a razed peach orchard, and comes face-to-face with some traditional china dolls in exquisite costume who come alive. Arranged on a tiered green hillside in Yokohama, they chastise him for letting his family chop down the beloved peach trees. The episode is astonishing in its visual beauty. In “The Blizzard”, four exhausted and confused men struggle to survive in a mountain-top snowstorm, engulfed in the age-old dream frustration of being barely able to move one foot in front of the other. The snow-blind travelers are a metaphor for the struggle against death, with a seductive angel visiting the near-frozen leader and nearly leading him into sweet oblivion before he summons his will and blasts her away. As before, scene is shot with extraordinary feel for visual expression, but with more emphasis on sound, as the men clank their gear through the snow and gulp for oxygen.

Anguish of death while life goes on for those who survive is explored in “The Tunnel”. A surviving army commander straggling home enters a dark, frightening tunnel and, once through it, is confronted by the ghosts of his entire dead platoon who want his reassurance that their demise is not permanent.

In “Crows”, a painter enraptured by Van Gogh, steps into one of Van Gogh’s paintings and has a brief visit with the master himself, played by Martin Scorsese. As the painter steps into a series of Van Gogh canvases, he wanders through vivid country scenes until the crowning effect of black crows rising above the wheat returns him to the outside world.

“Mt. Fuji in Red” and “The Weeping Demon” are both grim, apocalyptic visions about the horrors of nuclear power plant explosions that send the population of Japan plunging into the sea in order to escape radioactive clouds of plutonium, cesium and strontium 90. The bleakness of life on a planet devoid of nature via such man-made destructions, and the mutant hell that awaits the survivors is depicted in “The Weeping Demon”. These two episodes give the film its strongest impact.

The last dream ends everything on a much more uplifting note. A 103-year-old philosopher in “The Village of Water Mills” talks about the values of simple life close to nature and, in doing so, reaffirms the values that make human life a joy: clean air and clean water. “These,” the old man says, “are the most important things for humans.”

Well, Mr. Kurosawa, not exactly. Such a world view is romantic, and thus it misses the total joy of knowing the Truth that will set you free. In any event, the film is worth seeing, as Kurosawa splashes the screen with sumptuous colors and awesome images, and demonstrates once again his classic storytelling skills. AKIRA KUROSAWA’S DREAMS is a reflective film, not the action adventure fare which most Americans crave. In many ways it is a masterpiece of film making and a great opportunity to gain a profound insight into the mind of one of the world’s great film makers.