"Battling Evil on the Mean Streets of Los Angeles" 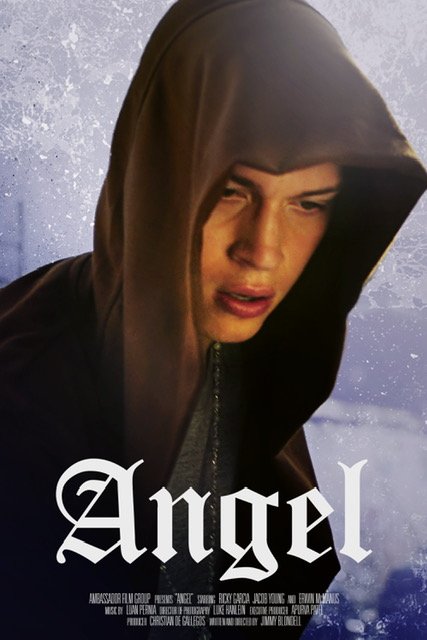 ANGEL is a faith-based movie set in Los Angeles. A young man abandoned as a baby has been raised by a former priest, Father Thomas. Believing God sent the boy, Thomas tattooed the back of his neck with a symbol of 777, the number for God. Now, Angel walks the streets, ridding the city of crime, healing people and driving out drug lords. He also helps a young unmarried pregnant woman who’s turned away from God. His task is difficult because some cops are corrupt even when they pretend to be good. Angel returns to see Father Thomas. With his approval, Angel leads a literal battle between Good and Evil.

ANGEL is shot in East Los Angeles. This gives the movie an authentic, familiar feel. The movie ends with a person accepting Jesus as their Lord and Savior, so the movie’s Christian, salvation message is clear. Thus, ANGEL can be an evangelistic tool given the right audience. That said, ANGEL is a bit edgier than most faith-based movies. It contains some violence, sensuality and drug references. Consequently, MOVIEGUIDE® advises caution for older children and adults.

(CC, BB, L, VV, S, A, DD, M):
Dominant Worldview and Other Worldview Content/Elements:
Strong Christian, moral worldview in faith-based thriller asserting that angels exist and protect us whether we know it or not, movie urges Christians to drive out demons and heal the sick, good triumphs over evil in plot about battling a drug lord, and a person gives their life to Jesus, plus many Catholic relics displayed including rosary beads around Angel’s neck and a drawing on a building of Mary
Foul Language:
One obscenity and one profanity
Violence:
Strong and light violence includes a person is hit by a car off screen, one man slams another man against a wall, a police officer throws a man to the ground, a scene of a woman having a drug overdose, a scene of women shooting bullets into pictures of Jesus and the Pope, one scene of attempted suicide, one scene of police shooting a criminal
Sex:
No sex scenes but some sensuality and two people kiss
Nudity:
No explicit nudity but several scenes of women in bikinis or bras and underwear
Alcohol Use:
Two scenes of people drinking
Smoking and/or Drug Use and Abuse:
No smoking, but villain is a drug lord selling poisonous fake drugs, several scenes of drug use, one scene where a woman is having a drug overdose; and,
Miscellaneous Immorality:
Light miscellaneous immorality.

ANGEL stars Disney star Ricky Garcia in a story about a homeless young Latino who becomes an underground hero and media phenomenon when he’s seen performing miracles in his local community. This faith-based movie is taken from Luke 4:10, “For it is written, he will command his angels concerning you, to guard you.” While dirty cops roam the streets, drug lords flood the streets with fake drugs just to increase profits and crime is on the rise, the world can seem hopeless. However, in this movie, angels really do walk among us.

A young Latino man in Los Angeles named Angel acts like an angel when he heals people who have been hurt by placing his hands on them and healing them. Angel wants to take down dirty cops and seeks to rid the streets of drugs, but it’s not that simple.

Angel encounters Mr. Jones, a drug lord who, along with his trio of good-looking women, seek to stop Angel so they can have all the money and power they desire. Angel also befriends a young pregnant woman who’s turned away from God.

Angel goes to see Father Thomas Diaz, a former priest and self-proclaimed soldier for God who tells Angel he found him on a flight of stairs as a baby, abandoned and unnamed. Father Thomas raises him because he believed he was someone special and a gift of God. When Angel sees Thomas for the first time in years, Thomas tells him to “take time to breathe deeply of life.” “That is the gift,” Thomas says. With this in mind, Angel wages war against evil in the city and, ultimately, in the heavenly realm.

There is a clear tension between good and evil, God and the Devil, in ANGEL. The women who work for Mr. Jones are scantily clad and wear makeup which make them out to be demons and zombies. Mr. Jones treats women as nothing more than eye candy. Many scenes are shot in the graffiti strewn streets of California. The movie also has a Catholic feel, with many relics displayed including rosary beads around Angel’s neck and a drawing on a building of Mary as the holy mother. This may deter some Christians from watching the movie. However, the movie’s Christian message of our role in fighting evil is abundantly clear.

Many scenes are shot on the streets in Los Angeles, which enhances the movie’s depiction of places where crime is on the rise and the poor are always among us. This gives the movie an overall feeling that our job to heal the sick and drive out demons can happen whether we are on the posh streets or impoverished areas. The movie ends with a person giving their life over to Jesus, so the movie’s Christian, salvation message is clearly stated. Thus, ANGEL can be an evangelistic tool given the right audience.

That said, ANGEL is a bit edgier than most faith-based movies. There is one instance of taking the Lord’s name in vain and one obscenity. This may prevent some Christians from watching the movie due to their sensitivities. This along with scantily clad women in bras and underwear in several scenes plus a moderate amount of violence makes this movie inappropriate for pre-teenage children.