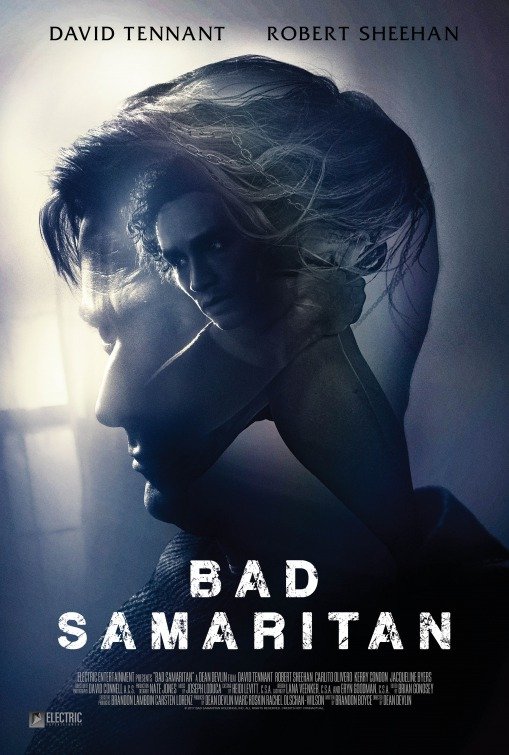 BAD SAMARITAN is an intense thriller. Sean, an artist who does photography, works as a valet at an Italian restaurant in Portland, Ore. Unknown to the owner, Sean and the other valet, Derek, are using the cars to go to the homes of customers so they can rob their houses. One rich customer, however, has a woman chained up in his house. Sean can’t undo the woman’s chains and has to leave her behand. He alerts the police, but the kidnapper fools the police and learns Sean’s identity. Can Sean find the woman and expose the kidnapper before the man kills her, or kills Sean?

BAD SAMARITAN is clearly made on a low budget, but it has some good twists and turns that keep viewers on the edge of their seats. The movie’s antihero, the young thief, is racked with guilt about leaving the woman behind. As a result, he’s willing to do anything he can to rescue her. This gives the movie a solid morally uplifting worldview. Sadly, though, BAD SAMARITAN has about 125 or so obscenities and profanities. Extreme caution is advised.

(C, B, LLL, VVV, S, NN, A, DD, MM):
Dominant Worldview and Other Worldview Content/Elements:
Solid redemptive, moral worldview where young thief tries to change his ways and do the right thing by risking his life to save a woman from a psychotic kidnapper and serial killer;
Foul Language:
At least 106 obscenities (including many “f” words), 13 strong profanities and four light profanities;
Violence:
Very strong and strong violence includes woman chained up has many bruises on her face and arms, people are hit in head with shovel, dead bodies buried in a pit outside are discovered and include one male corpse that’s been recently murdered and frozen, man shoots one young man to death and there’s blood, woman falls into pit, villain beats up woman and smashes her head against a wall before dumping her over a one story high railing but she survive, villain threatens woman and man, ;
Sex:
Implied fornication in one scene and kidnapper has woman chained up and there’s an undercurrent of sadism in the way he treats woman, though it’s not graphic or extremely explicit;
Nudity:
A flash of upper female nudity in one scene;
Alcohol Use:
Some alcohol use;
Smoking and/or Drug Use and Abuse:
Brief smoking and brief marijuana use; and,
Miscellaneous Immorality:
Lying, kidnapping, stealing, and smug villain falls into a rage from time to time.

BAD SAMARITAN is an intense thriller about a young thief who finds a woman who’s been kidnapped by a psychotic but devious and clever serial killer and tries to rescue her. BAD SAMARITAN has some exciting, suspenseful twists and turns, but they’re spoiled by 125 or more obscenities and profanities that undercut the movie’s entertainment value, moral acceptability and heroic derring-do.

The movie opens with a young photographer in Portland named Sean having a tryst with his girlfriend at his place. Afterwards, Sean gives his mother a nice-looking ring for her birthday. Sean has apparently stolen this riong and other jewelery.

Later that night, Sean goes to his job parking cars at an upscale Italian restaurant with his friend, Derek. Sure enough, the two young men are using the cars to go to the homes of customers so they can rob their houses. That evening, a rude man rolls up in a fancy car. Sean takes the car to the man’s house while Derek watches the guy in the restaurant to make sure he doesn’t want to leave soon.

At the man’s house, Derek finds an expensive credit card in the man’s mail that the man obviously hasn’t seen. He uses the guy’s phone to call it in, but the card requires a computer confirmation. So, Sean unlocks what appears to be the man’s office, only to find that the man has a woman tied up in a chair. Sean tries to free the woman, but he can’t unlock the largest chain holding her down. At the same time, Derek phones Sean to tell him the man wants to get his car and leave the restaurant. So, Sean has to leave the woman chained up and later calls the police. However, by the time the police get there that night, the man has hidden all the evidence of his crime, including the woman. So, the police leave while Sean watches from his car.

Sean keeps trying to get the police to do something more, but the kidnapper turns the tables on Sean. Things turn worse when the man finds out Sean’s identity and tries to make Sean, Sean’s girlfriend and the lives of Sean’s mother and stepfather a living Hell. The man also kills Derek and tries to frame him for the murder. Sean tries to fight back by investigating the kidnapper and trying to discover what he did with the woman. Meanwhile, the movie reveals that the man has taken the woman to a cell he’s fixed up for her in a cabin the man owns in the woods.

Can Sean find the woman and expose the kidnapper before the man kills her, or kills Sean?

BAD SAMARITAN is clearly made on a low budget by mega-blockbuster Director Dean Devlin of INDEPENDENCE DAY and STARGATE. Despite this, the movie has some good twists and turns, and an exciting denouement. Also, David Tennant of the BBC’s DR. WHO and BROADCHURCH turns in a creepy, nuanced performance as the psychotic, devious kidnapper and serial killer. The ending also has one of the best, funniest climactic lines ever written for a thriller about a serial killer.

What makes BAD SAMARITAN morally interesting is that the movie’s antihero, the young thief, is racked with guilt about leaving the woman behind. In fact, he’s mortified with himself for making such a horrible decision. As a result, he’s willing to do anything he can to rescue her. The question is, of course, whether he’s smart enough to outwit the demented killer.

Sadly, BAD SAMARITAN is filled with lots of strong foul language. This not only makes the movie less entertaining. It also dilutes the movie’s moral points. Because of this, BAD SAMARITAN probably won’t attract the audience it needs to succeed financially.