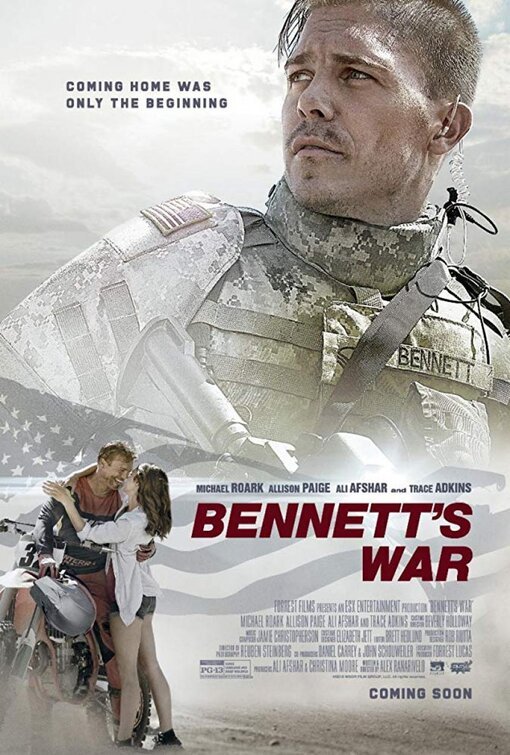 BENNETT’S WAR stars Michael Roark as Marshall Bennett, an American solider who gets injured in Afghanistan and is medically discharged. Trying to find new direction to his life, Marshall decides to get back into Motorcross racing, much to his wife, Sophie’s, chagrin. When one of the best racers, Kurt Walker, messes with Marshall’s bike and causes him injury, Marshall thinks he can never race again. However, Kurt’s former manager, Tony, encourages Marshall to race again to prove he really is the best racer.

BENNETT’S WAR is an entertaining, well-acted, action-packed drama. The cinematography is really good, with most being live action shots with no computer-generated graphics. Racing lovers will love the shots of racers jumping hills and navigating the twists and turns of the track. BENNETT’S WAR is also a relatively clean movie, with no overt lewd content or high amounts of violence. It also has a strong moral worldview stressing putting family first, hard work, and perseverance, with a mealtime prayer in one scene. However, there is a moderate level of foul language. So, MOVIEGUIDE® advises caution for older children for BENNETT’S WAR.

(BB, C, Ro, LL, V, S, A, M):
Dominant Worldview and Other Worldview Content/Elements:
Strong moral worldview stresses putting family first, perseverance, working together, hard work, and discipline, plus implied Christian content when family prays to God for protection and provision during mealtime, with some Romantic elements of chasing personal dreams no matter the cost
Foul Language:
13 obscenities, two profanities and one scene of a man pulling down another man’s pants in public
Violence:
Two scenes of people shooting guns at each other during war, one person punches someone in the face, one person falls off a chair because someone tampered with the screws, and man falls off motorcycle
Sex:
Innuendo when woman says, “I can be the public relations specialist for the team because the sponsors are men, and I have boobs”
Nudity:
No nudity
Alcohol Use:
One scene of alcohol use
Smoking and/or Drug Use and Abuse:
No smoking or drugs; No smoking or drugs; and,
Miscellaneous Immorality:
Light miscellaneous immorality includes tampering with personal property, and Iranian immigrant mentions that women are looked down upon in his country.

In BENNETT’S WAR, Marshall Bennett, serving in Afghanistan, is shot while under attack. Permanently injuring his heel and requiring surgery, he’s medically discharged and can no longer serve. With a wife and newborn son waiting at home, Marshall is excited to come home to them but depressed about his broken foot. Feeling like he’s lost his purpose, he and his dad fix up the bike he used when he raced in Motorcross races.

Despite doctor’s orders not to race, Marshall races anyway, winning first place and beating two brothers named Kurt and Chris Walker, two of the best racers. He does this partly to get back into racing again, but partly so he can earn money to help his dad save the family farm from creditors. When his wife, Sophie, finds out about the racing, she’s reluctant but agrees to let him race on the promise she can be the team manager.

The only way Marshall can earn back his license is if he earns 60 AMA points, meaning he must be in the top three of four qualifying races. Marshall does this in two races, but on the third has an accident, that badly injures the same heel injured before. It is quickly realized one of the Walker brothers messed with his bike, causing the injury.

Observing doctor’s orders to not race for twelve weeks, Marshall gets an unexpected visit from Tony, manager for the Walker brothers. Tony informs Marshall that he left Kurt’s team. Wanting revenge, Tony wants to coach Bennett so his whole team can go professional. Can Marshall win his fourth qualifying race, the Loretta Lynn qualifier, and return to racing as a professional?

Michael Roark and Allison Paige, who play Marshall and Sophie Bennett, deliver stellar performances. Every female viewer who has a husband will be able to relate to someone whose husband stubbornly does something they’ve asked them not to do. Every male viewer will relate to Marshall, who, losing his purpose in life, struggles to find meaningful work after an injury in war changes the trajectory of his physical health – and his life in general. Trace Adkins is a delight playing Marshall’s dad. Although he plays a tough guy in many of his movies, he delivers some sweet monologues that will warm even the coldest of hearts.

The cinematography in BENNETT’S WAR is also stellar. Whether the scene is of a sniper on the hills of Afghanistan, or on the bike on the racing track in California, viewers will feel like they are with the characters as the plot moves forward. Many scenes are shot in muted tones like brown or yellow. This is especially poignant in the initial scenes in Afghanistan, where Marshall and his friend Riley are waiting for an enemy attack. Even in the first scene of Marshall seeing his newborn baby for the first time over Facetime, the choice to shoot it at night, using only the light of the phone to illuminate the shot, was a bold yet wise choice, as it put all the focus on what Marshall is really fighting for – his wife and newborn child.

There is no overt Christian worldview, with the exception of the Bennett family holding hands and saying grace before dinner. They call God by name, however, only pray for protection and peace for Marshall as he races again, as well as His provision for keeping the house with the money Marshall’s racing has provided.

One of the other issues Christians might find bothersome is the treatment of women. In one scene, Marshall’s team manager, Cyrus, says, “I don’t know about all this women’s power stuff. Maybe it is just my upbringing, but in my culture, women are seen and not heard. Sometimes they are not even seen.” In another, Sophie says, “I can be the public relations specialist for the team because the sponsors are men, and I have boobs.”

The movie is clean and relatively non-violent, especially when the initial plot involves a man fighting in Afghanistan. Directors Alex Ranarivelo and Christina Moore do a wonderful job of depicting only what is necessary to tell their story, while allowing the audience’s imagination to do the rest. The movie contains little gratuitous sexual content or violence, which adds to the movie’s quality and acceptability. The biggest issue with BENNETT’S WAR is the foul language. As a result, MOVIEGUIDE® advises caution for older children.