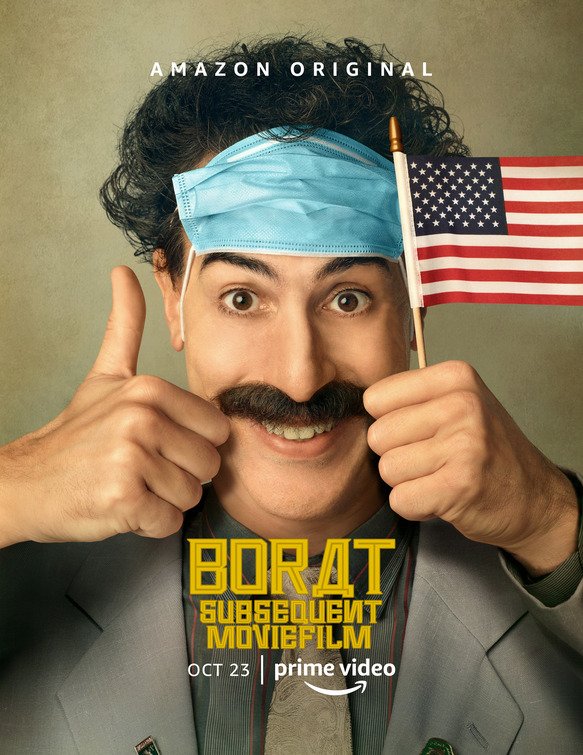 (PaPaPa, PCPCPC, APAPAP, AbAb, FeFeFe, B, LLL, VV, SSS, NNN, A, D, MMM):
Dominant Worldview and Other Worldview Content/Elements:
Very strong left-wing, pagan worldview intended to comically promote a lewd, deceitful and false politically correct, Anti-American, leftist attitude against America and against President Trump, Vice President Pence and their supporters, plus movie supports a strong radical feminist, pro-abortion attitude that mocks a pro-life Christian pastor and a Holocaust survivor and a compassionate black woman give some good advice to the two lead characters, which causes them to change for the better, though the man seems to still support his country’s Anti-Semitic view of the Holocaust (all this is mostly played in a vicious comical manner)
Foul Language:
27 obscenities (including two or three “f” words), one GD profanity, two light profanities, man is shown defecating in front of Trump Tower in New York City, woman sits on a toilet, and a woman gives an obscene gesture to another female
Violence:
Some strong and light violence (used for comedy effect) includes gross images of woman having her period on her panties when she lifts up her dress two or three times, image of a partially eaten monkey, government torturers have a strongman using a sledgehammer to drive a small bell into man’s thong-covered private parts, and suicidal man jumps out of second floor window of a building (allegedly one of the tallest buildings in Kazakhstan), and he then gets up
Sex:
Lots of crude sexual content and images referring to self-abuse, marital sex, incest, fornication, rape, blacked out pornography scenes, a cartoon of President Trump gets visually aroused and later grabs Melania’s private parts when they first meet, bloody menstruation, animals fornicating, oral sex, and human trafficking
Nudity:
Several images of male organs, a young woman’s pubic hair (the woman’s playing a 15-year-old girl though the actress was 23 at the time of filming the movie), upper male nudity, partial rear male nudity, male wears a cup barely covering his genitals, and man runs around in his underwear in public in three scenes
Alcohol Use:
Brief alcohol use
Smoking and/or Drug Use and Abuse:
No smoking or drugs; and,
Miscellaneous Immorality:
Lots of deception and manipulation, lots of false leftist propaganda, and there’s a plot to spread the COVID-19 virus throughout America, and Holocaust survivor talks seriously to a man even though he’s dressed in an outrageous, unbelievably bigoted costume of a Jew with a foot-long fake nose.

BORAT SUBSEQUENT MOVIEFILM is another raunchy, disgusting, Anti-American mock documentary from talentless British comic Sasha Baron Cohen where a sexist Muslim idiot from Kazakhstan travels to America, this time to viciously ridicule President Trump, Vice President Pence and their supporters. BORAT SUBSEQUENT MOVIEFILM is one of the most unfunny, loathsome radical leftist comedies a moviegoer can see; it contains some strong foul language and lots of raunchy, evil material, including explicit nudity, a scene mocking a pro-life pastor by deceiving him, deliberate deception and manipulation of average people, and jokes about supporting the mass murder of Jews in the Holocaust.

Borat visits a fax store to inform his president that the monkey is dead, so the president threatens to execute him. Borat suggests that they give his daughter to Pence instead, and the president agrees. The movie repeatedly shows that Borat is a very sexist man who treats his daughter like property. It also says that all the men in Borat’s country force their wives and daughters to live in cages. In addition, Borat makes his daughter read a government book making all sorts of oppressive rules for women and teaching all sorts of sexist lies about women.

At any rate, the rest of the movie shows Borat and/or his daughter playing all sorts of disgusting tricks on unsuspecting Americans. They pose as Americans despite their terrible accents, perform a raunchy dance at a Southern debutante ball, visit a pro-life pregnancy clinic, get kicked out of a conservative convention when Borat dresses up in a Trump mask and dress suit over a fat suit and tries to give his daughter away to Pence, give a raunchy defense of female masturbation to a small group of Republican women, dupe two Southern Trump supporters who shelter Borat during the early days of the COVID-19 lockdown, try to get breast implants for the daughter to make her more attractive, and even at one point duping Rudy Giuliani, President Trump’s legal advisor. They also seem to dupe a compassionate black woman and a Holocaust survivor who talks seriously to Borat even though he’s dressed in a totally ridiculous and clearly fake Anti-Semitic costume that even Adolph Hitler would find silly if not stupid. All this vicious, lewd ridicule makes one wonder how many Americans and Trump supporters the filmmakers failed to dupe. Also, a lot of planning clearly went into shooting the movie, so it strains credulity to think that many of these sequences are really real. The fact that the conservatives at the convention immediately were onto Borat’s tricks and kicked him out shows that Americans and conservatives are not as stupid and easily duped as the filmmakers want their audience to believe.

The ultimate goals of BORAT SUBSEQUENT MOVIEFILM are to viciously (in a lewd and malicious manner) ridicule and attack America and to ridicule and attack President Trump, Vice President Pence and their supporters. The filmmakers use deception to do this. They also make up leftist lies about America, Trump, Pence, and their supporters. In doing this, they use their movie to promote the false and hateful identity politics of the Radical Left, malicious leftist lies that have infected half or more of the American people and 90% of the mass media and the Democrat Party. As a result, BORAT SUBSEQUENT MOVIEFILM will attract many consumers who’ve been duped by these Anti-American, Christophobic leftist lies.

BORAT SUBSEQUENT MOVIEFILM is an abhorrent, malevolent leftist movie. The filmmakers are not as clever as they think they are.