"Protecting Liberty and Justice for All" 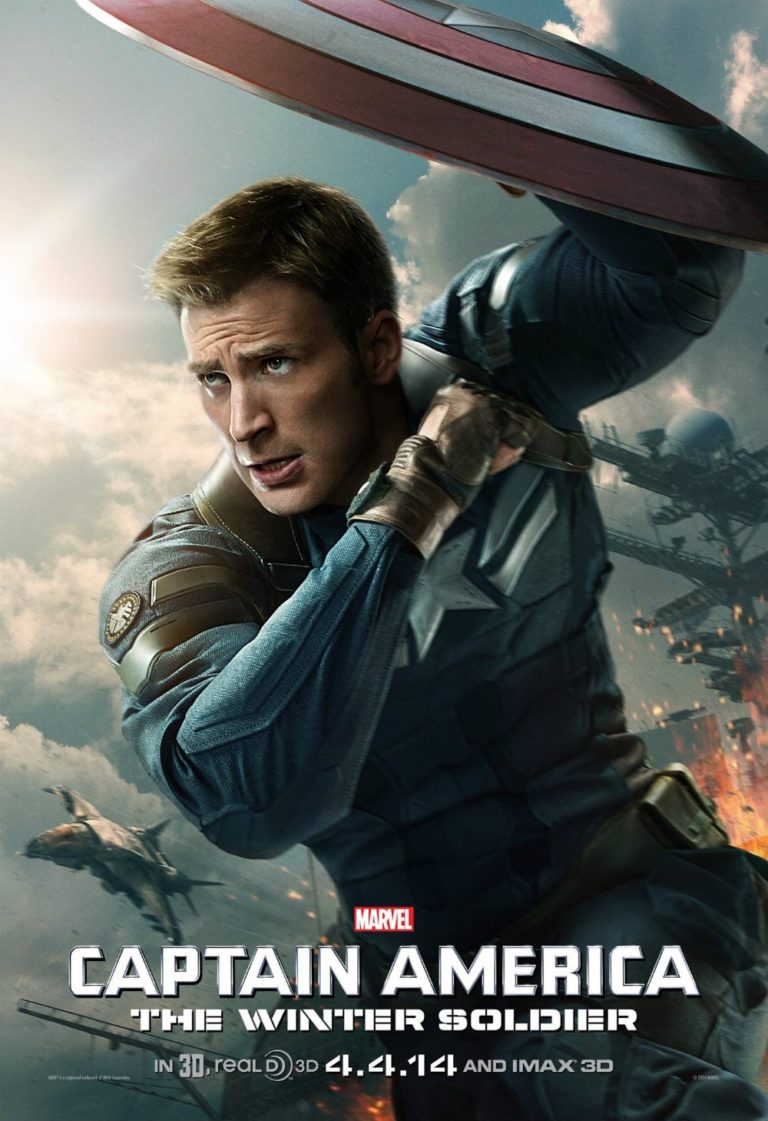 CAPTAIN AMERICA: THE WINTER SOLDIER is a terrific action movie. It hits all the right plot points and adds some nifty twists. Once again, Chris Evans does a superb job as the iconic hero. The supporting players are also excellent. Happily, THE WINTER SOLIDER has a strong Christian, redemptive, moral, patriotic worldview with an overt baptism and other Christian symbolism. Captain America and his friends are protecting both American liberty and world freedom. THE WINTER SOLDIER warrants caution, however, for intense action violence and brief foul language.

(CCC, BBB, PPP, ACACAC, LL, VV, N, A, M) Very strong Christian, redemptive, moral worldview with a reference to the embellished Bible verse about the path of a righteous man used in the movie PULP FICTION, also starring Samuel L. Jackson, taken in part from Ezekiel 25:17, an overt baptism, sacrifice, possible repentance, and hero risks his life and has a symbolic resurrection trying to save and redeem his friend’s soul after it’s been warped by demonic villains with a multi-headed serpent image for their evil group using a form of mind control, with very strong Pro-American, patriotic, and anti-totalitarian values opposing statist, socialist control of society and promoting liberty, including Captain America hero at one point reminds people that the price of freedom can be high; 13 or 14 obscenities (including six “h” words, five or six “d” words, one SOB, and one a** word) and one light “My God” profanity, plus one “s” word seems to be cut short and not fully uttered; strong, sometimes intense action violence includes gun battles, hand-to-hand combat and martial arts fighting, some use of knives and objects, falling from great heights, assassins riddle protect SUV with bullets trying to murder driver, explosions, hero gets shot in leg and shoulder, other people shot, lots of derring-do with swinging and jumping and hiding from bullets; no sex, even when hero and female lead banter where she advises him about him dating other people with whom they work when they seem attracted to one another; partial upper male nudity; alcohol use; no smoking or drugs; and, Captain America “borrows” a car trying to get away from murderous villains, villains have infiltrated the good guys to betray them, and issues of government spying and use of drone technology are discussed but in a positive, moral, patriotic way.

The new CAPTAIN AMERICA movie, THE WINTER SOLDIER, is a superb, exciting comic book thriller with lots of exhilarating action. With a strong Christian, moral, patriotic worldview, Captain America maintains his patriotic integrity and decency throughout the movie, which also has an positive Pro-American, patriotic political message stressing liberty and standing against tyranny for today’s moviegoer.

In the story, a mysterious, legendary assassin called “the Winter Soldier” critically wounds Nick Fury, Captain America’s boss at SHIELD headquarters. Fury hands Steve Rogers, aka Captain America, a flash drive showing that SHIELD has been secretly compromised. “Don’t trust anyone,” Fury tells Cap before he lapses into a coma.

Captain America refuses to tell anyone at SHIELD about the flash drive, including Alexander Pierce, the man heading the international council that oversees SHIELD. Pierce orders all SHIELD agents to capture Captain American so he can be interrogated. With help only from Natasha Romanoff, the notorious Black Widow, and a friend who’s a veteran, Cap must now avoid both SHIELD agents and the Winter Soldier and his cohorts. Captain America and his friends uncover a secret conspiracy to take over the world. At stake is not just the future of SHIELD and their own lives, but also the future of freedom in America and the whole world.

CAPTAIN AMERICA: THE WINTER SOLDIER is a terrific action movie. It hits all the right plot points to drive the story forward, along with some nifty plot twists. Once again, Chris Evans does a superb job as the iconic hero. Skillfully assisting him are Scarlet Johansson as the Black Widow, Samuel L. Jackson as Nick Fury, Anthony Mackie as the Falcon (Captain America’s new friend), Robert Redford as Secretary Pierce, and Sebastian Stan as the Winter Soldier.

Happily, THE WINTER SOLIDER has a strong Christian, moral, patriotic, anti-totalitarian worldview. The movie’s worldview mostly stems from the conflict between Captain America’s basic Christian integrity and decency and the nefarious motives of the movie’s multiple villains. Without giving away too much of the plot, Captain America learns that the villains have secretly infiltrated SHIELD to take control of the United States and the rest of the world. Part of their plan involves taking over SHIELD’s new system for monitoring and targeting terrorists and using it to control everyone on the planet. Captain America must work with the Black Widow and the Falcon, his new friend, to preserve American liberty and save the world. To raise the stakes, the filmmakers give each of the heroes a personal stake in the fight as well. This effectively increases the danger to the heroes, who have to put everything on the line to stop the villains and their evil plot.

WINTER SOLDIER also contains an overt baptism, which includes an heroic, redemptive death and resurrection. This reflects Captain America, the hero’s, Christian, moral and patriotic worldview.

CAPTAIN AMERICA: THE WINTER SOLDIER also has some interesting social and political angles in its plot. For example, early in the movie, Captain America voices some opposition to Nick Fury about SHIELD’s new spying and anti-terrorist technology. The technology involves monitoring possible terrorists with huge military airships in the sky that can also be used to spy on civilians. In fact, [SPOILER ALERT] that’s exactly what the evil conspirators plan to do – spy on civilians and eliminate those who might oppose them, starting with American civilian and military leaders. Captain America tells Nick he thinks the new technology is created out of fear, not out of a desire to protect liberty and defend people. At another point, Captain America urges people to stand up for liberty, but also reminds them that the price of freedom can be very high. Finally, Captain America’s new friend, Sam Wilson aka the Falcon, helps American war veterans recovering from PTSD. Thus, not only does THE WINTER SOLDIER extol liberty, it also briefly honors the price that America’s war veterans, who fight for liberty, pay to protect our freedom and the freedom of others.

All in all, CAPTAIN AMERICA: THE WINTER SOLDIER is one of the best superhero movies yet. Cautions is warranted, however, for many intense scenes of action violence, including gun battles, and some mostly light foul language.