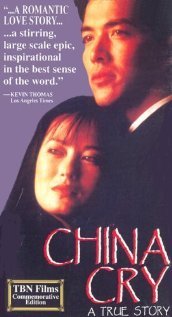 What a joy to find Christians producing high quality feature films for the mass market. Trinity Broadcasting Network has gone all out in this beautifully filmed and produced movie about the making of a Christian.

Adopted by the prominent Sung family in Shanghai in 1941, a little girl is treated like a princess. Servants cater to her every whim, until one day bombs drop into the palatial garden, and the Japanese seize her house. The invasion is the beginning of a life of tribulation for Sung Neng Yee, who, as the credits tell us, becomes the Christian missionary, Nora Lam.

After the defeat of the Japanese, Sung Neng Yee joins the Communists, believing they are the liberators of her beloved China. All goes well with her university studies to become a lawyer until she falls in love with Lam Cheng Shen, who comes from Hong Kong. Officials of the brutalizing Communist system, with its interrogations, brainwashing, forced labor, torture, and firing squads, decide to break Sung Neng Yee of any bourgeois tendencies. During the next few years of her life, in which she marries and has three children, she is subjected to excruciating persecution, as she comes into more and more conflict with the repressive regime of Red China.

However, in the process, she remembers the teachings of her Christian grammar school and calls out to God for salvation. Miracles follow. A sudden lightening storm prevents a firing squad from killing her. An underground prayer group provides food for her baby.

She bargains with her life for her husband and daughter’s release to Hong Kong. She is sent to hard labor, pregnant with her third child. During that time, she learns that her father, once an imminent doctor, has been persecuted and is being used for biological experiments. He is being drained by drugs that cause him to bleed profusely. Sung Neng Yee, with reckless abandon, starts agitating for her own release….

CHINA CRY is director Collier’s best since THE HIDING PLACE. The fine camera work evokes the sights and smells of the Orient. Al Kasha’s superb music heightens the drama of the script.

Thus, the audience shares in Nora Lam’s sorrows and her victories. This is one of the ten best films of the year. Not only does it expose the senseless humanism of communism, but it reveals the journey of faith which produces an exemplary Christian life.

It is rewarding to see some of the top Christian leaders in the United States of America commend this excellent movie:

Dr. Bill Bright of Campus Crusade for Christ notes, “CHINA CRY is a compelling and powerful motion picture which clearly demonstrates that the human spirit can survive even the terror and persecution of a totalitarian state when God supplies the courage and strength.”

Dr. Lloyd Ogilvie, pastor of the Hollywood Presbyterian Church comments, “CHINA CRY is an engrossing and powerful motion picture which everyone should take a friend to see. It is a testament that seeds of faith planted early in life can grow strong and sustain life in the worst of trials. CHINA CRY is magnificent and triumphant.”

CHINA CRY is a must see for everyone.
RECOMMENDED ACTION: Please contact Paul Crouch at Trinity Broadcasting to thank him for this fine film:
Paul Crouch
TBN
P.O. Box A
Santa Ana, CA 92711
(714) 731-1000