"Learning To Be a Better Man" 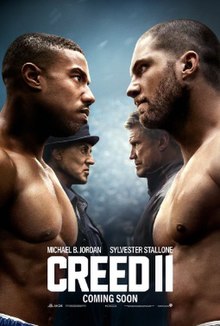 CREED II is a recent ROCKY spinoff sequel. Adonis Creed has proven himself an able young champion but must find a new challenger or forfeit his championship. A shady promoter travels to Russia to watch Ivan Drago’s son, Viktor, brutally knock out opponents in secret matches. The promoter returns to the States and taunts Adonis with the chance to avenge his father’s death by Viktor’s father. He brings Ivan and Viktor to Philadelphia to confront Rocky and make the fight happen. Rocky fears that Adonis could wind up killed the way his father was.

CREED II is a solid movie. It should please the fans of the ROCKY series and its own predecessor. However, it lacks the first movie’s passion. Too much of the conflict seems old hat, but the final boxing match is exciting. CREED II has a strong moral worldview with positive Christian elements that extols family. It has some strongly affecting scenes about family reconciliation and redemption, especially toward the end. Happily, CREED II treats its characters with respect and intelligence. Strong caution is advised for boxing violence, foul language, and a bedroom scene.

(BB, CC, LL, VV, S, N, A, D, M):
Dominant Worldview and Other Worldview Content/Elements:
Strong moral worldview with some Christian, redemptive elements stresses family, family reconciliation, honoring one’s parent, and learning to be a better man, with a visit to a couple gravesites with Christian crucifixes, a silent prayer where Rocky makes the Sign of the Cross, the protagonist kneels to pray before and after his fights, and some use of Christian metaphors such as being reborn and going through Hell;
Foul Language:
14 obscenities (some obscenities are in music lyrics) and five light profanities;
Violence:
Intense boxing action and punching throughout, including the titular hero breaking ribs and being beaten is placed into hospital care, swollen eyes and many boxing cuts and bruises, intense boxing training;
Sex:
Implied fornication between engaged couple who have a baby out of wedlock;
Nudity:
Upper male nudity, female wears bra in a bedroom scene and upper male nudity in boxing scenes;
Alcohol Use:
Brief social drinking of alcohol by adults;
Smoking and/or Drug Use and Abuse:
No smoking or illegal drugs but there is pain medication; and,
Miscellaneous Immorality:
Threatening conversations and violent promises between boxing rivals, and Rocky is estranged from his son and grandson but a reconciliation occurs.

The sequel to a ROCKY spinoff movie, CREED II follows the new world champion boxer Adonis Creed, as he defies his trainer and friend Rocky Balboa’s orders and takes on the brutal son of Rocky’s 1980s Russian rival Ivan Drago in order to avenge Creed’s father, Apollo, at Ivan’s hands. CREED II is a solid entertainment, and should please the many fans of the ROCKY series and its own predecessor, but it lacks the passion of the first CREED movie, though it has a strong moral worldview with Christian, redemptive elements that extols family. Caution is advised for boxing violence, some foul language and a bedroom scene.

Adonis Creed has proven himself an able young champion in the first CREED movie and now has to find a new challenger or risk forfeiting his championship belt. Meanwhile, a shady promoter has traveled to Russia to watch Ivan Drago’s son Viktor brutally knock out opponents in under-the-radar matches there.

The promoter returns to the States and taunts Adonis with the chance to avenge his father’s death at the hands of Viktor’s father, Ivan. He then brings Ivan and Viktor to Philadelphia to confront Rocky and further push the fight to happen. Rocky is afraid Adonis could wind up brutally beaten or killed the way his father was, right at the time Adonis is seeking to propose to his girlfriend, Bianca.

Adonis decides to get in the ring and is indeed beaten to a pulp, resulting in a hospital stay with broken ribs and bleeding kidneys. Yet, since Viktor was disqualified from winning the match on a technicality, he demands a rematch on his own Russian turf, and this time Adonis decides to take the match on Rocky’s terms. This involves learning to train from scratch, with an intense new series of challenges far beyond what he’s ever encountered.

CREED II is a solid movie, and should please the many fans of the ROCKY series and its own predecessor, CREED. However, it lacks the passion of the first CREED, which came largely from having Rocky battling to stay alive while suffering through cancer, since Rocky is now largely healthy again and doesn’t have as compelling a plot line.

Too much of the internal conflict Adonis deals with seems old hat. Also, Director Steven Caple, Jr. doesn’t make the fight scenes truly exciting until the terrific final match. The training sequences where Rocky sticks Adonis with inventive means of getting in shape is more interesting than fun to watch, a flaw compared to the myriad intriguing ways Rocky used to train throughout his own series of movies.

CREED II has some strongly affecting scenes about family reconciliation and redemption, especially toward the end. Happily, it treats its characters with respect and intelligence, even if the storyline is sometimes repetitive. Dolph Lundgren steals the show as an older, sadder Ivan Drago, desperate for one last chance at success after his ROCKY IV loss to Rocky cost him his lavish lifestyle and even his marriage. In the end, the movie is not just about training to be a better boxer but learning to be a better man.

There is a smattering of foul language in CREED II, and the boxing matches naturally have violence without going to extremes. Besides the foul language, a brief bedroom scene between an unmarried couple is the movie’s main moral issue.

Ultimately, CREED II is entertaining enough for really strong fans of the ROCKY and CREED movies to see it in theatres, but watch out for the boxing violence and foul language.