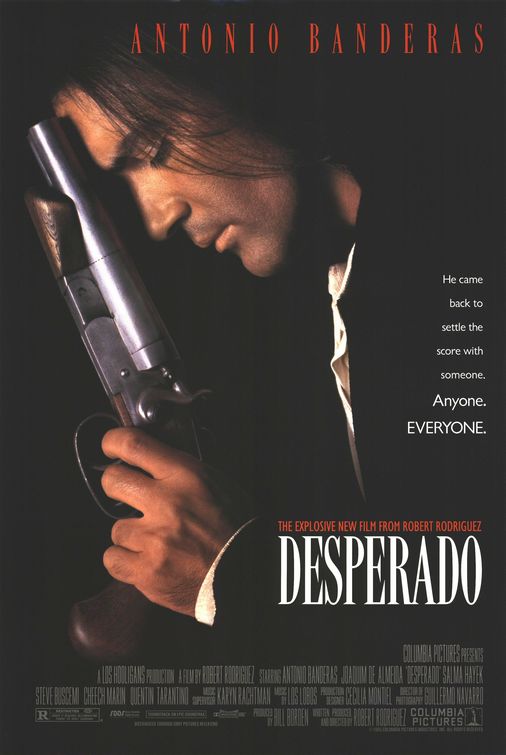 Antonio Banderas plays the Mariachi in DESPERADO. Bent on exacting revenge against a drug lord for killing his girlfriend, the Mariachi kills anyone that gets in his way. While exotic and titillating, this action picture rehashes action revenge themes by portraying bloodbath upon bloodbath, which is ultimately not very redemptive.

Set on a border town in modern day Mexico, DESPERADO features Antonio Banderas as the nameless Mariachi player who carries a guitar case filled with guns and various other weapons. Traveling from town to town, the Mariachi destroys anyone that comes in his way as he looks for Bucho, a drug lord who killed his girlfriend. When the Mariachi enters a bar, he asks for Bucho’s whereabouts. The response is a round of bullets, so the Mariachi opens his guitar case to play his own tune. Wounded, the Mariachi finds help from a beautiful bookstore owner named Carolina. She stitches him up and tells him she wants Bucho dead. Bandaged, the Mariachi escapes a vicious knife throwing thug, returns to Carolina for a steamy romantic tryst, kills some more of Bucho’s thugs, and prepares for his ultimate showdown with Bucho at Bucho’s own home.

There is a temptation to place a higher production value on this film than it deserves. What could be perceived as entertaining is actually titillating and shocking. This picture doesn’t equal the complexity of a PULP FICTION, nor the style of a Sergio Leone spaghetti western. There is an attempt to provide moral value to this picture by depicting the Mariachi as a struggling Catholic, but in the end his desire of revenge overcomes him — not God’s grace.