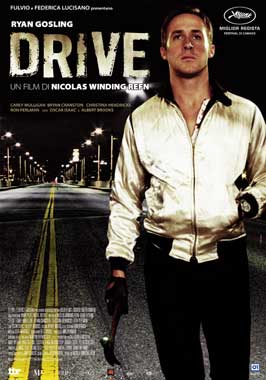 DRIVE is a thriller that feels like a throwback to classic 1970s films where tough men brooded while driving in flashy cars. In the story, a Hollywood stunt driver moonlights as a getaway driver. He likes a young woman, but discovers that her husband is just about to be released from prison. When the husband gets out of prison, he wants to go straight but is forced to rob a pawnshop to pay off a crime syndicate for protecting him in prison. The driver agrees to help out, but the robbery is a set-up, and the husband gets killed. Now, the driver must protect the widow and her son from the evil crime boss who wants to kill them too.

DRIVE has a uniquely laid-back pace between its frenetic bursts of action. The central character’s quest to become a better man provides a level of moral depth. Despite the protagonist’s moral, redemptive efforts to stop the bad guys and help others, DRIVE contains an excessive amount of foul language and some brutal violence, mostly from the bad guys. DRIVE also has a scene with brief nudity set in a strip club.

(B, C, LLL, VVV, S, NN, AA, DD, MM) Light moral worldview with redemptive elements of self-sacrifice and redemption, about a movie stunt driver who doubles as a getaway driver for any criminal that pays the right price but realizes that he wants to leave his life of crime behind and helps an ex-con, his wife and their child; more than 100 uses of profanities and obscenities; very strong violence includes several car chases leave a rampant path of destruction, evil crime boss goes into brutal frenzied outbursts, crime boss stomps man to death and then kicks man’s head so strongly it snaps off his neck, crime boss shakes henchman’s hand then slashes veins in his arm and forces him to bleed to death, protagonist fights in secret bar and strip club owned by crime boss, protagonist kills another man in self-defense in an elevator, violent showdown at the end with knives and stabbing; man flirts with woman married to a man in prison, a strip club scene and protagonist kisses recently widowed mother; shots of upper female nudity; alcohol use and scene in bar implies excessive drinking; smoking; and, robbery and lots of back-stabbing, double-crosses and deceit from the bad guys.

DRIVE is a thriller that feels like a throwback to classic 1970s films where tough men brooded while driving alone in flashy cars. Yet, it’s also somewhat of a morality tale, as its central figure, a brooding loner named Driver (Ryan Gosling), starts to realize that his career as a getaway driver for criminals is an empty, lonely enterprise eating away at his conscience.

Driver’s desire for redemption is fueled by his meeting Irene (Carey Mulligan), a young and seemingly single mother who actually has a husband in prison for theft. When her husband, named Standard, is released, he wants to go straight but is forced to rob a pawnshop in order to pay a crime syndicate off for protecting him in prison. Driver offers to be his getaway man, because he feels that he’s performing a greater good in helping Standard break free from his crimes and openly live a new life with his family.

The pawnshop robbery, however, is a setup and Standard is killed. This tragic turn of events leaves Driver with a desire to avenge Standard’s murder and protect Irene and her son from the crime bosses, who also want them dead. As he goes looking for the head criminal, Bernie (Albert Brooks), and his front man, Nino (Ron Perlman), Driver winds up killing several henchmen along the way before a final showdown.

DRIVE has a uniquely laid-back pace between its frenetic bursts of action. The central character’s quest to become a better man provides a level of depth to the movie. The unusual tone is heightened by a frequent use of songs that sound like they were created in the era of 1980s pop even though they are new, with the songs mixed with modern techno instrumentals.

The protagonist’s change of heart is exemplified by his risking his own life to help the ex-con and his wife when the ex-con is forced to do the robbery. When the husband gets killed, the protagonist again risks everything, including his life, to help save the ex-con’s wife and their child.

These moral, redemptive elements are marred by excessive foul language and some brutal violence from the criminals the hero is fighting. There’s also an action scene in a strip club that contains explicit nudity. The foul language, violence and nudity could perhaps have been cut back enough to make DRIVE a PG-13 action movie. As they exist now, however, they are excessive.

Of course, in the end, true redemption is not only turning away from sin, but believing the Good News of the Gospel of Jesus Christ, the Word of God made flesh who sacrificed Himself for us to redeem us from all wickedness, purify us and make us eager to do what is good (Titus 2:11-14).