EVERYTHING EVERYWHERE ALL AT ONCE 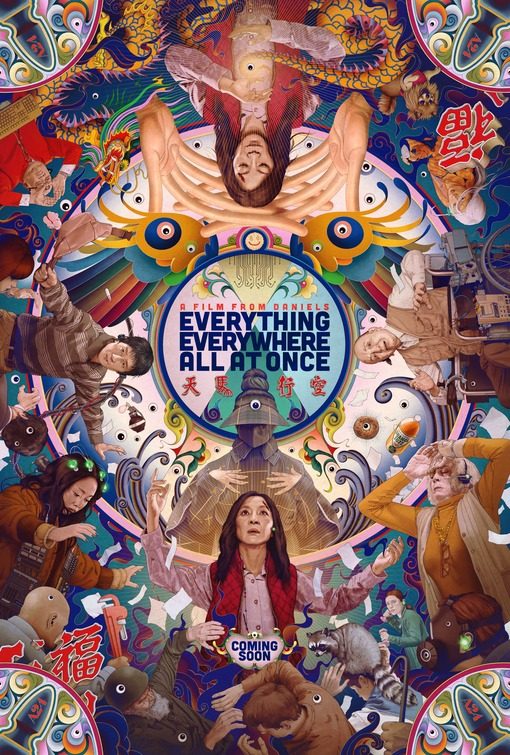 EVERYTHING EVERYWHERE ALL AT ONCE is a comical science fiction movie about Evelyn Wang, a disillusioned Chinese immigrant filled with regrets. She avoids connection with her family in favor of an obsessive preoccupation with her failing laundromat. Evelyn’s in trouble with the IRS. At the IRS, Evelyn meets “Alpha Waymond,” her husband from a parallel universe. Alpha informs Evelyn she’s the only one who can save the multiverse. Short on talent and skills, she must travel countless other universes to recover skills to fight off many villains. However, the ultimate evil may be embodied in her daughter.

EVERYTHING EVERYWHERE ALL AT ONCE has some funny moments and an outstanding performance by Michelle Yeoh. There are gut-wrenching, touching moments where love is depicted as the greatest good. Evelyn eventually risks everything to save her daughter from evil. However, EVERYTHING EVERYWHERE ALL AT ONCE has a false pagan worldview overall. It sees the universe as the living creator/power that wills good or bad. It also contains bloody violence, strong obscenities, some marijuana use, and crude, lewd content, including strong politically correct homosexual references.

(FRFR, PaPa, C, B, PCPC, HoHo, LL, VVV, SS, NNN, A, DD, M):
Dominant Worldview and Other Worldview Content/Elements:
Strong false religion and paganism involving the “multiverse” sees the universe as the living creator/power of itself that wills good or bad for humanity, mitigated slightly by some light Christian, redemptive, moral elements of redemption, forgiveness, sacrifice, patience, love, and kindness as powerful forces, plus some strong politically correct references to homosexuality includes some same-sex kissing
Foul Language:
21 obscenities (including six “f” words) and lots of gross humor, including vomiting and eating nose matter
Violence:
Lots of violence includes some very strong bloody violence and strong violence such as several scenes of graphic Kung Fu fighting, two deaths, a man is beaten to death with two large penises, fighting sex toys, man jumps on a handle object to lodge it in his rectum, and two men fight with objects protruded from their rears but some of the images are blurred out
Sex:
Briefly depicted fornication in a quick flashback scene, brief references to bondage, a few kisses between a homosexual couple, a kiss between a married couple, and politically correct references to homosexuality
Nudity:
Sex toys depicted in two or three scenes includes two large artificial male organs and rear male nudity
Alcohol Use:
Some alcohol use
Smoking and/or Drug Use and Abuse:
Smoking tobacco and some marijuana use; and,
Miscellaneous Immorality:
Mother shames her daughter, and the daughter is completely self-absorbed.

EVERYTHING EVERYWHERE ALL AT ONCE is an eccentric, deranged journey of a disillusioned Chinese immigrant, who runs a failing laundromat and is in trouble with the IRS, and who must save the world by jumping around the multiverse to find the best version of herself. The movie contains some Christian and redeeming elements such as the importance of family, the power of good virtues and self-mastery. The main character risks her life to save her daughter. Her husband is the epitome of kindness, patience and generosity. However, the movie is marred with pervasive graphic violence, some sexual violence, including a few brief scenes involving bondage, some strong obscenities, and politically correct commentary on homosexual unions. The movie’s excessively bizarre and irrational behavior, along with the false ideology of a sentient multiverse, gives the feeling of almost two and a half hours of a drug-induced psychotic episode. Media-wise moviegoers will want to pass on this one.

Evelyn Wang is an anxiety ridden, disgruntled Chinese immigrant who runs a laundromat. She continuously laments over her poor life choices. She believes she should have followed the advice of her overbearing father to not marry her husband, Waymond. The ever patient Waymond has finally had enough abuse and decides to serve his wife with divorce papers. Meanwhile, their daughter, Joy, follows the neurotic Evelyn around the laundromat trying to make her invite her lesbian partner to a party Evelyn is planning for her very traditional, strict and demanding father. Joy refuses to respect her mother’s wishes of not wanting to upset her father in his old age. Evelyn avoids closeness with Joy with her own busyness. She also dismisses Joy and calls her fat.

Evelyn and Waymond are on their way to report to the battle-axe Deidre at the IRS, a comical role played by Jamie Lee Curtis. In the elevator, Evelyn meets “Alpha Waymond,” a version of her husband who informs her that there’s an imbalance in the universe. She’s the only one who can save the world. However, Evelyn has no skills or talent. For each poor decision she’s made in this life, a better version of herself branched off in a parallel universe. So, now, Evelyn must travel to other universes to connect with better versions of herself to find the skills to fight the great evil, which has become personified in her daughter, Joy.

EVERYTHING EVERYWHERE ALL AT ONCE is true to its name, but the movie incorporates too much material, which ultimately results in chaos. There are some funny moments, but the constant farcical elements will turn off some viewers. Michelle Yeoh, as Evelyn Wang, gives an excellent performance. Also, Jamie Lee Curtis gives a noticeably comical performance of the IRS specialist, Deirdre.