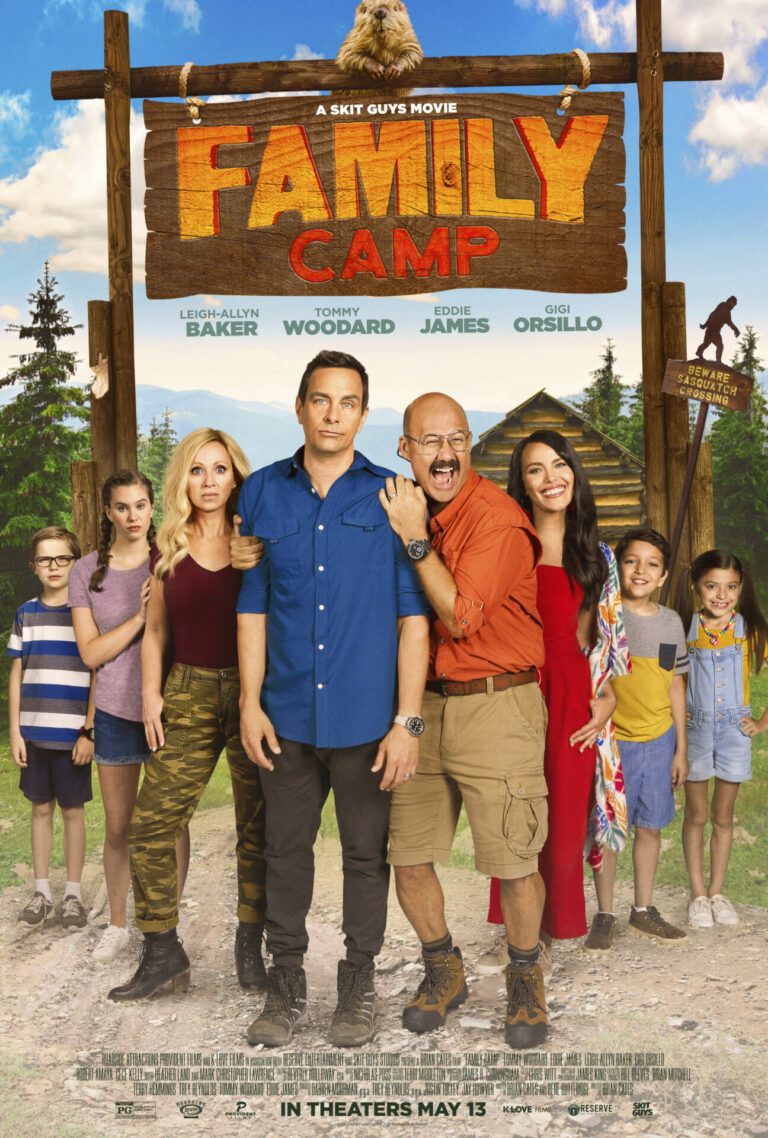 FAMILY CAMP is a funny, heartwarming comedy about two dysfunctional families that learn how to love one another at a Christian camp. Tommy Ackerman is committed to providing for his wife and two children, but his wife, Grace, wants more. She makes Tommy sign up for their church’s annual Family Camp. However, when they arrive, they’re put into a round yert with Eddie Sanders and his family. Eddie is rather annoying and, when he gets Tommy lost in the woods with him, some comical and dangerous situations ensue.

FAMILY CAMP is a funny movie with many heartfelt moments. Some of the humor is over-the-top. However, just when it looks like the movie is getting too hokey, some excellent surprises and plot twists keep viewers glued to the story. Despite some mean slapstick comedy and fighting, FAMILY CAMP is very clean. Even better, FAMILY CAMP has some very positive Christian messages about loving your spouse, faith, family, getting over pride, forgiveness, and many positive references to Jesus. MOVIEGUIDE® commends the cast and crew for creating a joyful, heartwarming comedy for the whole family.

(CCC, BBB, L, V, M):
Dominant Worldview and Other Worldview Content/Elements:
Very strong Christian, biblical, family worldview with lots of positive statements about God, faith, Jesus, forgiveness, love, family, pride and lots of insights into how families can live together better
Foul Language:
One light OMG profanity
Violence:
Some minor dangerous camping violence, especially when two Reality TV stars capture the two main characters, tie them up and leave them overnight to the wilds of a national forest, a beaver looks like it’s going to attack them, but it just chews their ropes and sets them free, several falls into lakes with the wife having great trouble getting out, several precarious situations, men are shot by tranquilizer darts used normally for animals, a competitive camp contest that involves some pushing and shoving and other contact, hunger after being lost in the woods, threats of violence, some punching and kicking, attempt to hurting another man but stopping short of hurting him
Sex:
No overt sex or sexual immorality, just several husband-wife kisses and hugs and a teenage boy tries to kiss a teenage girl but she is appropriately upset and pushes him into a lake
Nudity:
No nudity
Alcohol Use:
No alcohol use
Smoking and/or Drug Use and Abuse:
No smoking or drugs; and,
Miscellaneous Immorality:
Light miscellaneous lying, cheating, bragging, false friendships.

FAMILY CAMP is a funny, heartwarming movie about two dysfunctional families that learn how to love one another at a Christian summer camp. The movie has some very positive Christian messages, no foul language, no sex, and lightweight slapstick violence.

The movie opens with Tommy Ackerman on the phone closing a big deal and coming in late to church with only two minutes of the sermon left. The pastor is talking about Jesus and the need to love one another.

After his sermon, the pastor announces that the church is signing up people for the family camp. Tommy’s wife, Grace, wants to go because the family is falling apart. In a very funny scene, Tommy expresses each one of his concerns, and, as if reading his mind, the pastor answers each one of them. For instance, Tommy says the camp must have air conditioning, the pastor says each camp unit has air conditioning. Tommy relents and says he’s going to sign up for the camp.

However, when the family gets to Family Camp, Grace learns that Tommy forgot to make the sign up. However, the head of the camp, Joel, has a solution. He’s going to put the Ackerman family in a round Mongolian hut with Eddie Sanders and his family. Eddie and his family appear to be the perfect Christian family. They sing together, he plays the harmonica, they say prayers, he disciples their children, and he’s won the camp contest for two years in a row. In other words, Eddie and his family are really obnoxious, and totally opposite Tommy and his family.

Tommy’s daughter doesn’t want to be there. A very attractive teenager, she wants to be out dating boys. Tommy’s son is a nerd and likes being a nerd. He doesn’t want to play the camp games. He wants to look at nature and get out his slide rule and measuring tape. He’s a scientist in the making.

After one day of really challenging camp games, such as soccer while you’re in a big plastic ball, and other games that involve some degree of physical combat, they announce they’re going to have a hike of the fathers and husbands into the natural wilderness. Tommy protests that he thought this was a time to come together and be with family. His wife reminds him he spent a lot of time during this time on his phone with his clients and with a man who’s trying to steal his clients. As always, Tommy relents and goes on the hike and is paired with obnoxious Eddie.

Tommy gets Eddie into trouble with a beehive. Eddie is allergic to bees, but he’s brought an adrenaline shot, which he asks Tommy to jab into his thigh. In the midst of dealing with the bees, the other men leave them far behind.

Now, lost in the woods on the wrong path, Tommy and Eddie are trying desperately to survive. When everything looks worse, they run into two Reality TV stars whose reality program was trying to find Bigfoot in Arkansas. They try to borrow the stars’ motorized vehicles, but the stars catch them, tie them up around a tree and pour honey on the ropes to leave them to the wild creatures of the forest at night.

Meanwhile, back at the camp, everyone panics. They send the park police to find Eddie and Tommy. Even Tommy’s young son goes off by himself to find his father. Will they find Tommy and Eddie? Will the truth come out about Eddie Sanders, who has a tremendous secret? Tommy’s only hope is to turn his life over to God at last.

FAMILY CAMP is a funny movie with many heartfelt moments. Some of the humor is over-the-top. However, just when it looks like the movie is getting too hokey, there are some excellent surprises and plot twists that keep viewers glued to the movie. In terms of foul language and sex, the movie is very clean. The violence is slapstick, however, and slightly mean spirited in a couple places, such as when Eddie practices his chiropractic skills on other people. FAMILY CAMP has a lot of good in it, however. For example, it teaches how to love your wife and how to love your husband, how children should be appreciated for who they are, the importance of faith, getting over pride, learning how to forgive, and much, much more. MOVIEGUIDE® commends the cast and crew of FAMILY CAMP for creating a joyful, heartwarming comedy for the whole family.