"On This Rock, I Will Build My Church" 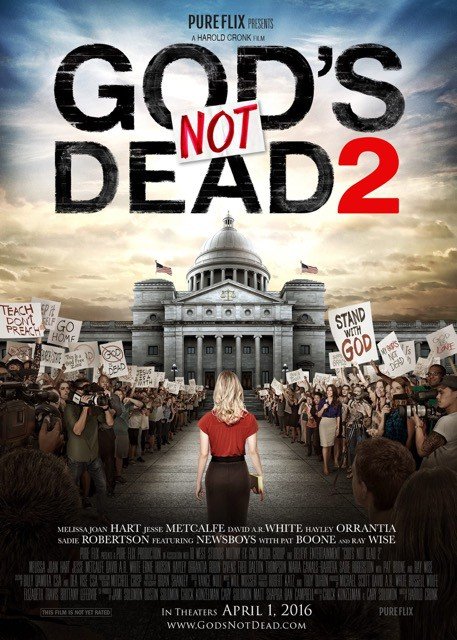 GOD’S NOT DEAD 2 opens with a montage introducing its main cast of characters. Pastor Dave gets a jury summons the same day his African friend, the Rev. Jude, returns to get his doctorate. Meanwhile, Grace Wesley, a local high school teacher, discusses Jesus and his message of love your enemy when asked a question about this teaching in a history class on Gandhi, Dr. Martin Luther King and civil disobedience. The school board brings in an atheist lawyer to convict Grace of violating the law and take away her teaching license. Pastor Dave ends up on Grace’s jury, but things suddenly go wrong with her defense.

The stakes in GOD’S NOT DEAD 2 are raised higher than the first movie. Consequently, the sequel is more dramatic and riveting. It also has a more direct, more comprehensive, more spirited historical defense of Jesus Christ and His Gospel, including His death and resurrection. Finally, GOD’S NOT DEAD 2 encourages Christians to peacefully protest against the forces of darkness and oppose their evil schemes to destroy our religious freedom to preach Christ’s Gospel.

(CCC, BBB, V, M) Very strong Christian, evangelical, biblical, moral worldview; no foul language; light comic “violence” when man stubs his toe and woman accidentally runs into him at the coffee shop and spills her coffee all over the front of his shirt, plus a verbal reference to a brother having died in an accident; kissing; no nudity; no alcohol use; no smoking or drugs; and, ACLU atheist and his hateful team of supporters want to silence all Christians because he and they don’t think Jesus existed and despise Christ’s Gospel, but they and their statist, anti-theist beliefs are thoroughly rebuked.

GOD’S NOT DEAD 2 moves into the courtroom as Pastor Dave finds himself on a jury deciding the fate of a Christian teacher who’s being tried because she dared to discuss Jesus when asked a specific question about Martin Luther King Jr.’s referencing Jesus Christ. GOD’S NOT DEAD 2 is even more dramatic and riveting than the first movie and affirms the Gospel of Jesus Christ directly.

The movie opens with a montage of its main cast of characters. Pastor Dave gets a jury summons the same day his African friend, the Rev. Jude, returns to get his doctorate in America. Meanwhile, Grace Wesley, a local high school teacher, talks to Brooke, one of her students, at a local restaurant. Brooke admits to Grace she’s still grieving over the loss of her brother, who died in a traffic accident. Brooke’s parents keep telling her they must all “move on,” but Grace cannot. Brooke asks Grace why she’s so happy most of the time. Grace replies with one word, “Jesus.”

The next day, Grace is talking to her history students at Martin Luther King, Jr. High School about the peaceful civil disobedience organized by Gandhi in India and by Dr. Martin Luther King, Jr. during the civil rights movement in the United States. Brooke asks Grace if their beliefs are similar to Jesus, who told his followers to love their enemies and “bless those who persecute you.” Grace agrees, citing references in scripture that inspired Gandhi and Dr. King.

The administration at Grace’s school isn’t happy with Grace’s discussion of Jesus, even though it was in response to a question from Brooke and was placed in an historical, social context, not a religious or theological one. The school board demands Grace apologize and never mention the name of Jesus again. Grace refuses to do that, so the school board brings in the ACLU, the American Civil Liberties Union, to represent Brooke’s parents. Peter Kane, the ACLU lawyer, is a committed atheist and wants to make Grace a test case to remove totally the name of Jesus from the public square. If he wins the case, not only will Grace lose her job. She will also lose her teaching certificate for violating alleged local, state and federal laws.

Happily for Grace, Kane makes a mistake and Pastor Dave ends up on the jury in her case. However, hope for Grace grows dim when Brooke demands to testify and the issue of Brooke’s private conversation with Grace comes to light. Things get even worse when Pastor Dave suddenly has an appendicitis attack and must be replaced on the jury.

The stakes in GOD’S NOT DEAD 2 are raised even higher than the first movie. Not only is Grace’s career in jeopardy, but her case may become a test case that will lead to more open persecution against Christians. The ACLU lawyer clearly wants to eliminate all public references to Jesus and his message of sin and salvation, in the name of “diversity” and “tolerance.”

After talking to her about her faith, Grace’s young lawyer develops a clever strategy. He brings in two expert witnesses, two real-life former atheists, Lee Strobel (THE CASE FOR CHRIST) and J. Warner Wallace (COLD-CASE CHRISTIANITY). They testify that their skeptical inquiries into Jesus confirmed to their minds the historicity not only of Jesus Christ’s message and death by crucifixion, but also His resurrection. Brooke’s testimony could render this strategy moot, however, because it suggests Grace was indeed trying to proselytize Brooke and her other students.

GOD’S NOT DEAD 2 is more riveting than the first movie. Even better, it has a more direct, more comprehensive, more spirited defense of the historicity of Jesus Christ, His death and resurrection, and the lives and ministry of His apostles. It also overtly affirms Peter’s declaration about Jesus and His divinity in Matthew 16:15-20: “You are the Messiah, the Son of the living God.” To which Jesus replies, “On this rock I will build my church, and the Gates of Hell will not prevail against it.” Finally, GOD’S NOT DEAD 2 encourages Christians to peacefully protest against the forces of darkness and oppose their evil schemes to destroy our religious freedom to preach Christ’s Gospel.

GOD’S NOT DEAD 2 isn’t a perfect movie. There are a couple tangents and subplots that may or may not lessen the enjoyment of some viewers. Also, the climax could have used another emotional scene between Grace and her grandfather when it looks like all will be lost the next day when the jury reads the verdict. However, GOD’S NOT DEAD 2 is much better and more inspiring than most Hollywood movies. Final twists about Grace’s case add immensely to the delight of seeing the evil, hateful, smug atheist lawyer being defeated. As Grace’s grandfather remarks near the beginning, atheism can’t take away the pain; it only takes away the hope.