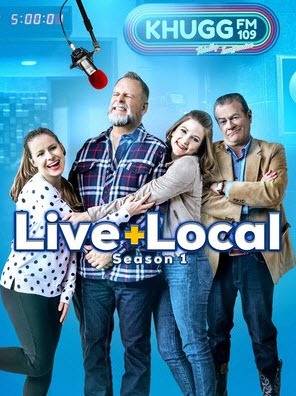 LIVE+LOCAL is a six-episode TV sitcom on the Pure Flix streaming outlet. The series focuses on the conflicts, troubles and interplay between Tommy Murphy and Tina Knott, the co-hosts of a morning radio show on a struggling Christian radio station somewhere in Middle America. The morning show includes comical bits and interviews with real Christian artists, comics and authors. When the long-time owner hires a new program director, Tommy and Tina fear the station will be sold to a conglomerate that will end original programming. Stand-up comic and actor Dave Coulier [“Coo-lee-yay”], star of the popular 90s sitcom FULL HOUSE, plays Tommy, and Emily Pendergast of HBO’s Emmy winning VEEP sitcom, plays Tina.

LIVE+LOCAL is a fun and funny, faith-filled sitcom that’s filmed like a mockumentary. As the heart of the program, Coulier and Pendergast work well together. The series builds to a heartwarming, satisfying climax in the last two episodes. The episodes are aided by great, inspiring interviews with two Christians, veteran stand-up comic Jeff Allen and THE CHOSEN creator Dallas Jenkins. Besides promoting faith and family, LIVE+LOCAL extols forgiveness and compassionate capitalism.

(CCC, BBB, CapCap, A, M):
Dominant Worldview and Other Worldview Content/Elements:
Very strong Christian, biblical, moral worldview that’s also pro-family, and there are some strong capitalists elements about the economic issues revolving around running a small radio station
Foul Language:
No foul language, but there’s references to passing gas in Episode Four and, when a man tells a woman in Episode Three, “Don’t go in there,” about a room with a lot of fancy electronic equipment, the woman jokes that that’s what the man sometimes says when he exits the bathroom
Violence:
No violence
Sex:
No sex
Nudity:
No nudity
Alcohol Use:
A joke about drinking in one episode
Smoking and/or Drug Use and Abuse:
No smoking or drugs; and,
Miscellaneous Immorality:
Some light personal conflicts and a discussion about the differences between Halloween, All Saints Day, All Hallows Eve, and harvest festivals.

The first season of LIVE+LOCAL [“LIVE AND LOCAL”] on the Pure Flix streaming outlet consists of six comical episodes about the conflicts, troubles and interplay between a man and woman who host a live morning show for a Christian radio station and includes interviews with real Christian artists, comics and authors. LIVE+LOCAL is a fun and funny, faith-filled sitcom starring Dave Coulier [“Coo-lee-yay”] of FULL HOUSE and Emily Pendergast of VEEP that builds to a heartwarming, satisfying climax and has insightful, entertaining, inspiring reality-based interviews with interesting Christians.

Each episode starts with Tommy Murphy and Tina Knott opening their five-hour morning radio show on K-HUGG, a struggling Christian radio station operating in an unrevealed tri-state area in Middle America. Tommy and Tina have been doing the morning show together for nine years, while Tommy has been hosting the morning show for 26 years. Their intern, Lucy, has just been chosen to be the traffic and weather girl. Every episode includes bits such as a comical police blotter, a letter answer bit called Judge Knott and funny spoofs of biblical history. Each episode also has two interviews with Christian celebrities, authors, artists, and comics. For example, there are interviews with the first winner of Gordon Ramsay’s MASTERCHIEF competition, Whitney Miller, who has a successful Southern-style cookbook and a popular cookie franchise. Other interviews feature singer Colton Dixon, clean comic Jeff Allen, lifestyle writer Anna Lind Thomas, and Dallas Jenkins, the creator and executive producer behind THE CHOSEN, the first multi-season series about the life of Jesus.

In the first episode, titled “There’s a New PD in Town,” Tommy and Tina learn they have a new program director named Jerry Greavey. As the episodes progress, Jerry begins to make changes that don’t set well with Tommy and Tina. For instance, Tommy doesn’t like the new cheesy slogans for their program, such as “Uplifting Positivity that’s Positively Uplifting!” Tommy complains that the slogan is redundant because anything positive is automatically uplifting. Tommy also becomes ticked off that Jerry is always complimenting Tina, but never has a positive word for him. He suspects Jerry isn’t going to give him a new contract.

Eventually, Tommy and Tina discover that the station’s long-time owner wants to retire and is looking to sell the station. Jerry seems desperate to keep Tina on for the new owners.

LIVE+LOCAL builds to a heartwarming, satisfying, funny climax in the last two episodes. The episodes are aided by great, inspiring interviews with two Christians, veteran stand-up comic Jeff Allen and the creator of THE CHOSEN, Dallas Jenkins. Allen, for example, briefly discusses his reasons for starting to do clean comedy. Allen says he didn’t want his children using foul language. He adds, “People may walk out because they don’t think I’m funny, but they’re not going to walk out if they’re offended.” He says his relationship with Christ brings him the greatest joy, followed by his relationship with his wife, children and grandchildren, then his career. “It starts with Him and then works its way out in the form of service to others and the relationships with those closest to me.” Besides promoting faith and family, LIVE+LOCAL extols forgiveness and compassionate capitalism.