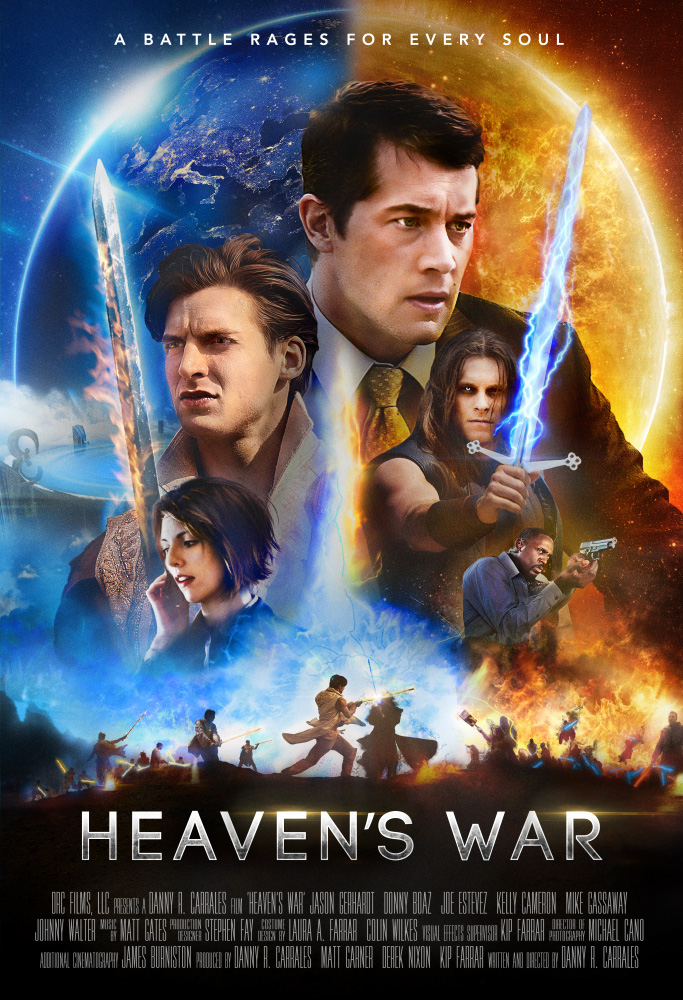 HEAVEN'S WAR is the story of freshman U.S. Senator Jonah Thompson. Jonah’s work as a senator gets him caught up in a battle between real demonic forces and the forces of good, including the angel Gabriel. Will Jonah recognize his life’s true savior, or will he give in to temptations and sin?

HEAVEN'S WAR has a very complex plot that’s hard to follow, but strong performances by the actors, a beautiful message, and gorgeous special effects help make up for the movie’s weaknesses. Moving subplots also resolve well. The movie is distinctly Christian. It stresses the redeeming love of Jesus Christ, and each person’s need for forgiveness. The supernatural battle of good versus evil described in the Bible is dramatized in the movie. Christian viewers will recognize Christian theological orthodoxy in the teaching of Gabriel. However, intense violence (including gunfights, swordfights, explosions, terrorist plots, bloody wounds, death, and corpses) make the movie unsuitable for young children. Disturbing depictions of demons and Hell may also trouble older children and adults, but the trauma is offset by the movie’s message extolling Christ’s love.

(CCC, BB, VV, S, A, MM):
Dominant Worldview and Other Worldview Content/Elements:
Very strong Christian worldview with strong moral elements where amoral behaviors like adultery and greed are presented as tempting, but ultimately unfulfilling and wrong, angels and demons clash in supernatural conflicts, the love of Jesus Christ is shared, belief in Christ is a turning point for the movie, movie stresses the redeeming love of Jesus Christ and each person’s need for forgiveness, and the protagonist is told that “God is about relationships” and that he needs to be freed “from the shackles of sin”;
Foul Language:
No foul language;
Violence:
Strong, sometimes intense, violence includes explosions, gunfights, people being killed, demons and angels engaged in fighting with swords, knives, and hammers, terroristic plans are carried out, bloody wounds and dead bodies are shown on screen frequently, there is a disturbing scene where people are thrown screaming into the biblical lake of fire;
Sex:
Implied adultery, references to prostitution;
Nudity:
No nudity;
Alcohol Use:
Some alcohol use;
Smoking and/or Drug Use and Abuse:
No smoking or drugs; and,
Miscellaneous Immorality:
Strong miscellaneous immorality but rebuked such as lying, greed, gambling, and hurting everyday citizens in order to gain monetary power.

In HEAVEN’S WAR, audiences are introduced to freshman U.S. Senator Jonah Thomas. Jonah’s work on the Hill keeps him busy, and his wife and daughter are beginning to feel unloved and unwanted. When Jonah inserts himself into a policy conflict among older Senate members, he finds himself faced with a whole new set of temptations to pull him farther from his family.

A new medication bill is being brought to the Senate floor, and Jonah finds himself lobbied by both sides. When Jonah agrees to take a meeting with a supposedly friendly senator on the bill, he unknowingly walks into the middle of an all-out spiritual war. HEAVEN’S WAR catapults Jonah – and the audience – into a real war zone, where Gabriel and a host of angels face off against a legion of demons.

HEAVEN’S WAR is a special effects masterpiece. The scenes of battle between the angels and demons are supported by beautiful effects that make the supernatural seem very real. There are some fantastic landscape shots of the “spiritual realm” as well as inventive imaginings of biblical characters.

Overall, the performances by the cast are strong. They help guide viewers through the internal battles of the characters. Donny Boaz (Gabriel) and Kelly Cameron (Aubrey, Jonah’s wife) are especially strong. Jason Gerhardt’s (Jonah) performance is occasionally stiff, but viewers will still enjoy watching his spiritual journey to the Gospel.

Those performances are needed, as the writing and plot are overly complex and so hard to follow. There’s an excessive number of characters to keep track of by viewers, and the connections between characters and motives and plot are especially dense. Young children are not likely to understand what’s happening at any given point.

However, the message of the HEAVEN’S WAR is distinctly Christian. Audiences follow Jonah’s journey to understand the message of the Gospel and to come to terms with his own sinfulness. Real biblical events and characters, like the angel Gabriel, are brought to life. The supernatural battle between God and the forces of evil is dramatized, though a little exaggerated.

The positive forces in the movie condemn sinful behaviors like greed, lust and lying (unsurprisingly found in the character of the U.S. senators). Even complex theological untruths, such as the idea that Hell doesn’t exist or that God just wants a person to be happy, are proven to be the work of demonic forces.

Despite the movie’s Christian worldview, caution should be expressed before allowing younger children to view this movie. Beyond just a complex plot, there are many disturbing images of demons, including a few jump scares. Intense scenes of violence and some blood are spread throughout the movie. Real, physical warfare between supernatural forces is part of the movie’s premise, so it’s not surprising that such warfare is shown in detail. Explosions, gunfights, swordfights, wounds, death, and corpses are regular parts of the more violent scenes in HEAVEN’S WAR.

All in all, teenagers and adults will find HEAVEN’S WAR to be an intriguing movie with a strong Christian message.