"It Takes More Than Talent to Live Your Dreams" 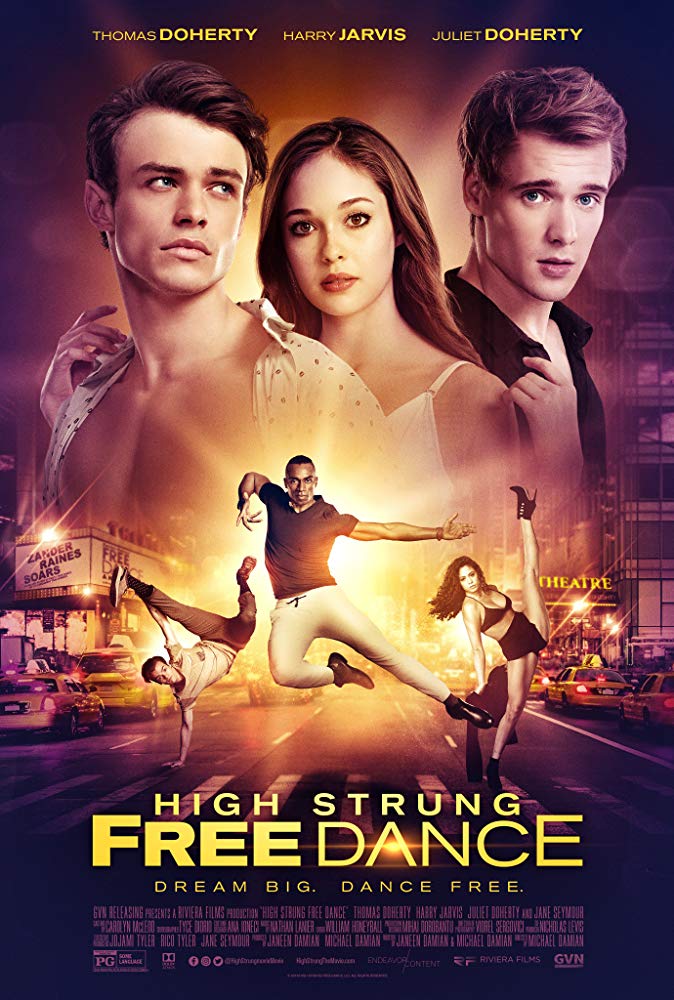 HIGH STRUNG FOR FREE DANCE is a modern musical drama. Barlow is a failed telemarketer who goes on every dance audition. Charlie is a gifted pianist who delivers bagels and can’t get in the door for an audition. The two live in somewhat parallel universes, until one day their paths cross. Barlow and Charlie’s worlds collide when the two land roles, through risk-taking and unconventional methods, in a big Broadway show. Barlow and Charlie become friends. Things get complicated when their friendship evolves into romance, because the show’s creator is also romantically interested in Barlow.

HIGH STRUNG FREE DANCE is a very entertaining, sweet tale. The story drags a bit, but the movie has a series of incredible dance and musical numbers, so the movie’s incredibly uplifting and entertaining. The movie has some very good messages about the importance of relationships, hard work, reaching for your dreams, and putting personal feelings aside for the good of the whole. Rated PG, HIGH STRUNG FREE DANCE is suitable for most audiences, but caution is advised for children due to some sensuality and a couple obscenities.

(BB, Ro, L, V, S, N, M):
Dominant Worldview and Other Worldview Content/Elements:
Strong moral worldview with some light Romantic elements promotes friendships, family, helping others, and teamwork, plus a young woman says, “There’s no excuse for lying, no matter how talented you are”
Foul Language:
Two obscenities
Violence:
A dancer pushes the main character off the stage to steal the show, but injures herself in the process;
Sex:
Some dance related sensuality, and two main characters kiss
Nudity:
Upper male nudity that’s dance related, and some dance costumes are a little skimpy
Alcohol Use:
No alcohol use
Smoking and/or Drug Use and Abuse:
No smoking or drugs; and,
Miscellaneous Immorality:
A main character lies, but it’s rebuked, and a dancer tries to steal the show from another performer, but her attempt is foiled.

HIGH STRUNG FOR FREE DANCE is a modern-day musical drama. The movie is a highly entertaining toe tapping tale of two struggling artists, Barlow and Charlie in New York City. Barlow works as a failed telemarketer who strikes out on every dance audition. Charlie is a gifted pianist who delivers bagels and can’t even get in the door for an audition. The two live in somewhat parallel universes, until one day their paths cross. Barlow and Charlie’s worlds collide when the two land roles, through risk-taking and unconventional methods, in a big Broadway show.

Charlie is a bagel shop delivery boy who practices on his broken down, old piano every chance he gets. In between deliveries on his bicycle, Charlie stops at piano bars in New York City looking for a chance to play. Wrought with rejection, Charlie expresses his anger and frustration to one his customers, Rose, who happens to be a retired professional pianist. Rose encourages Charlie to avoid anger and do something about his situation.

Barlow, the daughter of a famous master dance teacher, Oksana, (played by Jane Seymour), struggles to make it on her own in the industry. Barely surviving as a telemarketer in New York City, Barlow attends every audition possible. Overwhelmed with rejection and behind on her rent, she finds herself without a place to live. Faced with homelessness or living with her disapproving mother, Barlow’s situation looks hopeless.

The Broadway show’s creator, Zander, will do anything to make sure his production is successful. Barlow refuses to take no after Zander rejects her. He’s impressed with her boldness and gives her another chance. Barlow nails the second audition and is hired. Taken in by Barlow, Zander offers her a ride home. Their car hits a guy on his bike, who happens to be Charlie on his way to a last-minute stand-in “gig,” Making amends, Zander gives Charlie a ride to his “gig.” Charlie lights up the room, but his talent escapes Zander, who spends the whole time on his phone.

Soon after, Charlie shows up to a show rehearsal and asks for an on the spot auction. Prodded along by Barlow, Zander reluctantly accepts. Stunned by Charlie’s talent, Zander hires him. The synergy of the whole group helps them hit the ground running. Everyone is on board to create the best Broadway show.

Problems arise when a love triangle develops between Barlow, Charlie and Zander. The show’s lead star backs out, and Barlow becomes her replacement. The romance heats up as Barlow and Zander work closely together. The three are committed to their dreams and to the show, so they try to keep their personal feelings under control. However, things get complicated after Barlow is ousted when the original star recommits to the show.

HIGH STRUNG FREE DANCE has a strong moral worldview with some nice messages about the importance of teamwork, professionalism and passion in following your dreams. There are also some endearing supportive friendships that develop along the way. The movie is peppered with some touching moments in a mother and daughter relationship as well. Challenged with some plot issues, the movie drags a bit. However, the movie’s highly entertaining and at times cleverly tells the story through the dance numbers themselves. Phenomenal choreography, skilled lighting and magical sets make this a truly unique movie. There are some dance related sensual moments and a couple obscenities. Therefore, MOVIEGUIDE® advises some caution for children for HIGH STRUNG FREE DANCE.