I AM NUMBER FOUR 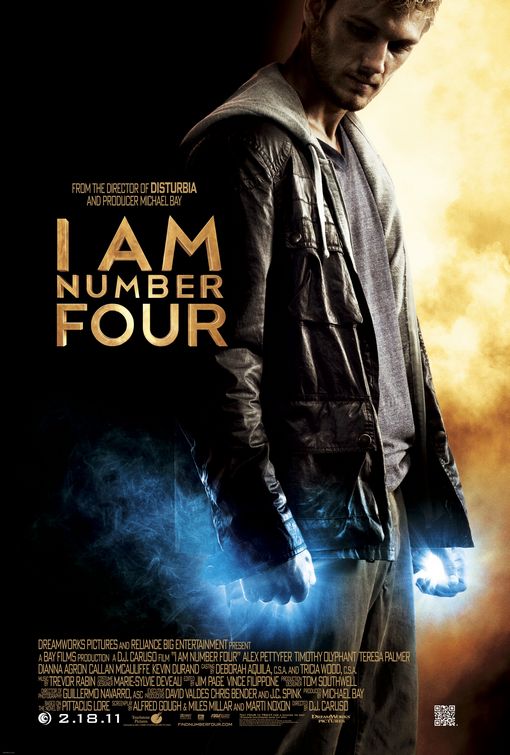 I AM NUMBER FOUR offers a fun mix of science-fiction adventure and teenage drama, but suffers slightly from plot holes and disjointed editing. The story follows an alien who resembles a human and uses the name John Smith while hiding on earth. He is the fourth of nine specially-gifted creatures from another planet, who are hiding from an evil ruling group of enemy aliens called Mogs. Mog warriors are out to kill each of the nine young aliens in numerical order, as part of a plan to wipe out their race. After nearly getting killed, Number Four and his older protector, Henri, move to a small Ohio town, where they encounter school bullies, teenage romance and more Mogs.

I AM NUMBER FOUR jumps between science fiction, teenage romance and drama. This is sometimes awkward, with action scenes coming out of nowhere. Yet, the action is fun, and the effects are impressive. More importantly, the teenage characters are positive, mostly clean-mouthed and engage in genuine romance rather than lewd activity. All told, despite some intense action and brief foul language, I AM NUMBER FOUR could be fun for older media-wise moviegoers.

(BB, C, Ro, LL, VV, M) Strong moral worldview of fighting evil genocidal forces, with a positive portrayal of wholesome small-town moral, chaste dating values and extolling the importance of traditional families, plus a redemptive element of forgiveness and some Romantic elements; 10 or 11 profanities and obscenities, including one use of “Jesus Christ”; frequent sci-fi/fantasy action violence, including frightening alien creatures who possess enormous monstrous beasts resembling a combination of dinosaurs and dogs that would frighten young children, several scenes involving violent hand-to-hand combat, as well as specially-powered knives used to stab people or aliens, fight scenes with numerous people and aliens being thrown viciously through indoor and outdoor settings, resulting in bouncing off trees, walls and other hard objects, two large explosions destroy a home and a school after they are intentionally set by an alien heroine, and one set explosion caused by evil aliens; no sex scenes but teenage romance scenes involve goodnight kisses, although they are passionate for a moment before female lead’s mother flashes light to make the couple stop; no nudity; no alcohol use; no smoking or drugs; and, deception used by heroic characters go into hiding, including false ID cards and disguises for the purpose of staying alive for a noble cause, teenage bully characters verbally and physically taunt and harass both alien hero and a teenage human outsider and one bully tries to scare ex-girlfriend into restarting relationship with him, but bully and heroes forgive and befriend each other in the end, plus another male character has an abusive stepfather who yells at him in a couple of brief scenes.

I AM NUMBER FOUR offers a mix of science-fiction adventure and teenage drama that suffers somewhat from plot holes and a somewhat disjointed mix of the genres. However, its teenage lead characters are refreshingly positive and moral, and the main romance is shown without any hint of improper sexual activity.

The story follows an alien who resembles a human and uses the name John Smith while hiding on earth. He is the fourth of nine specially-gifted creatures from another planet, who have been sent to Earth to hide from an evil ruling class of enemy aliens called Mogs. The Mogs want to utterly vanquish and pillage Number Four’s planet, and Mog warriors are out to kill each of the nine specially-gifted young aliens in numerical order, as part of a plan to wipe out their race and prevent them from re-taking their planet.

On earth, Number Four is protected by Henri, a fellow humanoid alien who pretends to be his father. The two are on the run from the evil aliens. They are nearly killed in Florida and wind up relocating to a small town called Paradise, Ohio. There, Henri wants to meet up with a UFO researcher who has mysteriously disappeared, in the hopes of finding quicker contact with the other remaining members of the nine heroic aliens. But, the researcher has disappeared, leaving his son Sam (McAuliffe) to be raised by a bullying stepfather and harassed by school bullies.

Number Four befriends Sam and falls in love with Sarah, a sweet girl with a happy family who used to date the school bully. As Number Four experiences true love for the first time, he must fight off the bully and, more importantly, the evil aliens who have once again found his new town and are prepared to kill him at any time.

I AM NUMBER FOUR jumps between its science fiction plot and high school romance and drama. This sometimes leaves an awkward mix in which action scenes seem to come crashing in out of nowhere. Yet, the action is fun and the effects are impressive. More importantly, this is the rare case of a sci-fi action movie in which the human elements are actually better drawn. Thus, the teenage characters are positive, mostly clean-mouthed and engage in genuine romance rather than being portrayed as sex-obsessed.

While the movie suffers from a deus ex machina aspect to its climactic battle, the movie sets itself up for a sequel that will likely be hitting multiplexes a couple years down the line.

All told, I AM NUBER FOUR is fun entertainment for teenagers and anyone who doesn’t over think the plot holes, while being morally sound enough for most viewers. The biggest objection is the action violence and frightening appearance of the evil aliens and their animals. Even so, overall, despite some intense action and brief foul language, I AM NUMBER FOUR could be fun for many media-wise moviegoers seeking effective popcorn fare.

Rent or Buy I AM NUMBER FOUR: