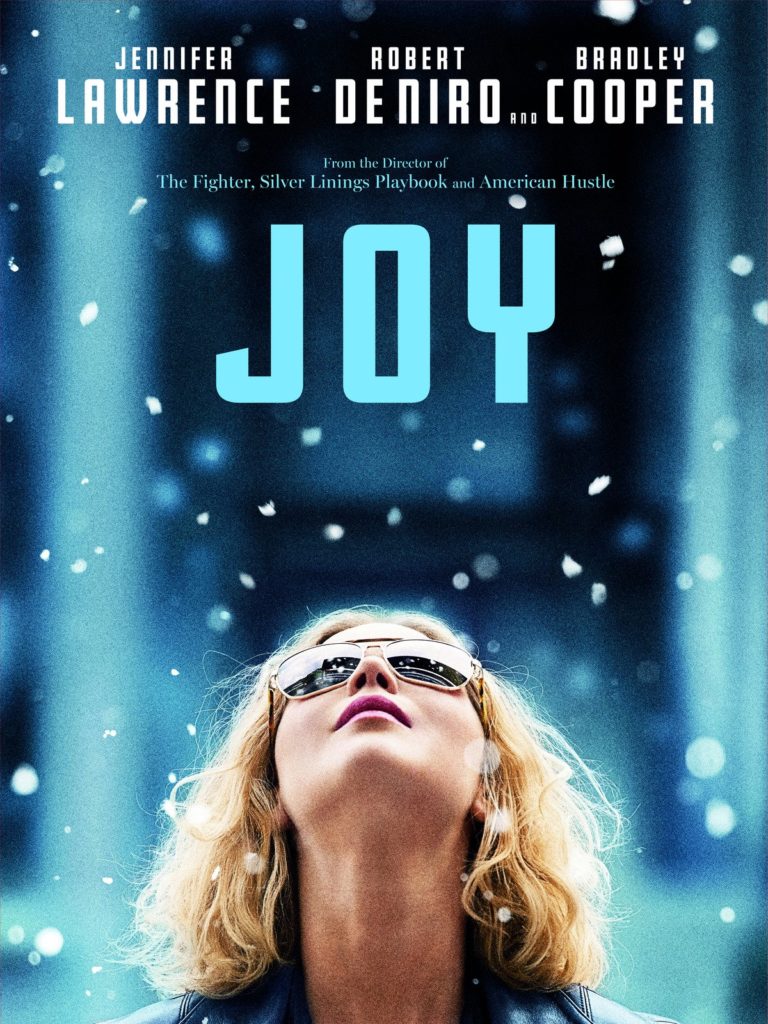 JOY is a true story about the invention of the Miracle Mop. Joy is a divorced mother struggling to provide for her children and her mother and grandmother. Encouraged by her grandmother but not her own mother or father, who are divorced, Joy invents a new kind of mop to help ease the burden of housewives everywhere. With nothing but a big dream, courage and perseverance, Joy must overcome many obstacles to get her mop to market. Some of those obstacles involve her dysfunctional father while others involve her business partners.

(BBB, CapCapCap, CC, L, V, AA, M) Very strong moral, pro-capitalist worldview with strong and overt Christian content and references plus some implied Pro-American content in that America promotes capitalism including love, compassion, heroine is a divorced mother gives up on her needs to provide for her family, heroine folds hands and closes eyes in one scene seeming to pray, heroine demonstrates forgiveness despite her parents’ dysfunctional behavior, capitalist success saves the whole family, heroine is concerned about the female consumers of her products, heroine uses her God-given talents to reach her dreams and provide for her family, heroine pays her talent forward, priest helps heroine find workers to producer her product, there’s a Christian wedding, there’s a Christian funeral, another character tells heroine, “Godspeed,” and business fraud exposed and overcome; one “f” word by a drunken man and six light exclamatory profanities such as “Oh, God!”; light violence such as father smashes a lamp on the floor when he gets angry, Joy and husband argue in front of children, Joy lightly slaps husband, target practice at a gun range; no sex scenes or sexual immorality, heroine and husband kiss on their wedding day at a Christian church, heroine’s divorced father kisses his girlfriend; no nudity; some alcohol use, and heroine’s father is drunk at her wedding reception and causes a scene (he’s not happy she’s marrying someone with no real job prospects); no smoking or drug use; and, heroine is divorced (but heroine has positive relationship with her ex-husband, who supports her and is still around for their children), dysfunctional parental relationships, heroine’s half-sister, father and father’s girlfriend sue her for money after their business venture has some legal problems, but it’s said heroine still honored her father afterwards, and business fraud, but it’s exposed and set right.

JOY is one of the best holiday movies to hit the box office in recent years. It’s a true story about Joy Mangano and the successful business dynasty she built with the Miracle Mop. Starring Jennifer Lawrence in the title role, JOY is surprisingly pro-capitalist, poignant and exciting.

The movie is partly narrated by Joy’s grandmother, who encourages Joy from a young age to follow her creative talents and be strong. Joy is an Italian-American, who works at an airline ticket counter in Boston, but she feels the weight of the world upon her. With her ex-husband and father living in the basement, her TV-addicted mother and grandmother upstairs, three small children, and a snotty half-sister who routinely insults her, Joy feels lost and helpless. Living paycheck to paycheck to provide for her family, Joy has forgotten what she wants in life.

One day, Joy’s father, played Robert DeNiro, invites the family on his posh Italian girlfriend’s boat for a day trip. While on the boat, a big wave crashes the side of the deck, smashing red wine bottles everywhere. While the family enjoys their drunken stupor, Joy (always the caregiver) gets down to clean up the mess. Scrubbing the deck and exhausted from having to ring out chunks of glass and red wine from the mop with her bare, bloodied hands, she gets an idea. That evening, she feels inspired to create things like she did when she was a little girl. Using her daughter’s crayons, she draws the first draft of the Miracle Mop.

With a desire to help housewives everywhere, Joy invents a mop you can ring out without using your hands. In fact, you can even throw the mop head in the washing machine!

Joy presents her idea to her father’s girlfriend, the wealthy widow of a successful businessman, where she is publicly humiliated in front of her family that her idea will never sell. However, Joy’s passion convinces the rich widow Joy has what it takes to sell the product. The widow lends Joy some money and helps her find a manufacturer in California and a patent attorney. The attorney discovers, though, that a man overseas has a similar patent, so Joy has to offer the man, through his representative in Texas, a royalty.

Selling the mop on her own proves to be more difficult than Joy thought. Her ex-husband, however, sees her dedication and decides to help. He takes her to meet an investor he knows. The investor fails to see the possibilities for her product, but Joy is introduced to Neil (Bradley Cooper), one of the founders of the QVC shopping channel on Cable TV. Joy tries to talk about her mop to Neil’s team of investors, but she becomes nervous and freezes up. After being rejected, she returns to Neil and convinces him her mop will sell.

However, Neil gives the job of selling the mop to his top salesman, who has no idea how the mop even works. So, the first commercial flops. Joy is now in danger of going bankrupt, so she decides to approach Neil again and tell him that the man he used to sell her product was the problem, not the mop she invented. She convinces Neil to let her sell the mop on air, even though Neil’s worried she will freeze up when she gets on camera. Sure enough, Joy starts to freeze up, but Neil coaxes her to get going. Joy starts to get better and better second by second when, suddenly, the phones start ringing off the hook!

Joy takes out a second mortgage on her house to fund her product’s manufacturing. However, another problem crops up when the California manufacturer decides to hike his prices as well as the other inventor’s Texas representative. Joy can’t afford the new prices, so she faces bankruptcy and humiliation. How can she overcome this new obstacle, which seems insurmountable?

JOY is a delightful drama about a determined woman who faces overwhelming obstacles trying to pursue her God-given talents. Many of the obstacles come from her dysfunctional parents, but other obstacles come from the business world, where the men running that world have no clue when it comes to the lives of American housewives and the products they want. Even the rich widow is clueless, however, because she doesn’t do the daily household chores Joy does. Through it all, however, Joy’s grandmother and her ex-husband give her encouragement, even when it seems all is lost.

The filmmakers lay on the dysfunctional family bit a little too heavily, but, in the end, Joy remains steadfast, even when she starts to falter during the final, seemingly insurmountable obstacles she encounters. It’s clear Joy has the creative drive to create products that people will want, but can she learn the kind of business drive, perseverance and acumen that lead to success? Kudos go to Jennifer Lawrence, who plays Joy as a fully rounded, likeable character who truly wants to help other American housewives and provide for her own children and parents, not just line her own pockets.

Best of all, JOY is one of the great pro-capitalist movies of our time. In that respect, it more than resembles the entrepreneurial spirit of the people who appear on the MOVIEGUIDE® Award winning show SHARK TANK. JOY also has lots of strong, positive Christian content. Joy prays at one point. She also gets help from the family’s Catholic priest, who provides Joy with local Hispanic women to attach her mop heads to the parts manufactured in California. The movie also offers a flashback to Joy’s Catholic wedding plus a scene at a Catholic funeral. Finally, at one point, Neil blesses Joy at a crucial moment, telling her, “Godspeed.”

To its credit, JOY has very little foul language. There is one “f” word, uttered by a drunken man in one scene, but the other foul language is just a scattering of light exclamatory profanities. JOY also doesn’t rely on crude or lewd dialogue or content. All in all, therefore, MOVIEGUIDE® only offers caution for older children.

JOY is a testimony to people everywhere who can use their God-given talents and, with great perseverance and courage, achieve their dreams. It’s an inspiring, feel-good movie, a joy for serious movie lovers to see, including media-wise moviegoers. As Paul says in Galatians 6:9, “Let us not become weary in doing good, for at the proper time we will reap a harvest if we do not give up.”

Listen to the Movieguide® Podcast Discuss Joy and Other Christmas Movies