"The Country Mouse and the City Mouse" 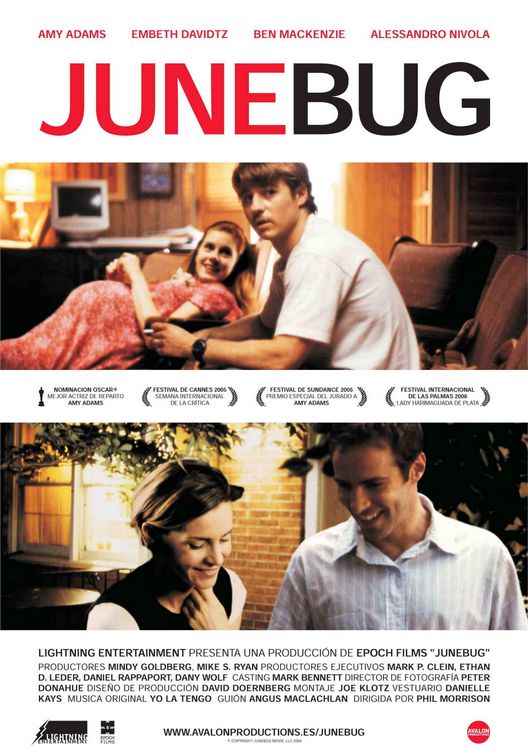 JUNEBUG is a well considered character study offering no easy answers. George left his family in rural South Carolina to move to Chicago, where he married Madeleine, a sophisticated art gallery owner. After being married a year, George takes Madeleine to meet his family for the first time, where they experience an obvious cultural clash. The family has pronounced Southern accents, attends church regularly and knows little about the high culture that Madeleine mentions. In contrast, George and Madeleine never think of religion and worry less about family. JUNEBUG explores all of these characters without relying on stereotypes, especially offensive ones. Each character rethinks some assumptions about culture and identity during George and Madeleine’s visit.

JUNEBUG features some upfront but not sensational sexual content, which automatically take it out of bounds for many audiences. There is also some strong foul language. That being said, JUNEBUG is clearly intended for mature audiences who can read between the lines. It doesn’t offer a pat solution to bridge the differences between its secular humanist and Southern Christian characters, but it poses some fascinating questions. The movie ultimately seems to lean slightly more in the humanist direction, however.

(HH, C, LLL, V, SS, N, A, D, M) Mixed humanist and Christian worldview where an urbane married couple from Chicago, who tacitly consider religion irrelevant, stay with the husband’s religious family, who take them to church, pray and sing hymns, with the moving seeming to ultimately side with the humanist viewpoint though it offers more questions rather than pat solutions to the conflict between the two worldviews; 20 obscenities, six profanities and one racial epithet; brother hits his brother in fit of jealousy; depicted marital sex (with no nudity) and foreplay, plus sex sounds from off-screen; upper male nudity, and crudely drawn paintings depict naked men; drinking; smoking; and, jealousy, and man severs himself from family because of embarrassment.

JUNEBUG is a well considered character study that offers no pat answers.

George left his family in rural South Carolina to move to Chicago, where he married Madeleine, a sophisticated art gallery owner from Europe. George doesn’t resent his family, but he hasn’t seen them in years and has never introduced his wife to them. When Madeleine needs to visit a folk artist who lives near George’s home, the couple decides to stay with the family for a week.

The South Carolina family, of course, is George and Madeleine’s opposite. They have pronounced Southern accents, attend church regularly and have limited knowledge of some of the high-culture names and events that Madeleine mentions. Madeleine regards the family as a curiosity at first, but she is always respectful and never dismissive of their culture or their religion.

Her respect is a signal that JUNEBUG does not rest on stereotypes. It creates a familiar character opposition but delves deeper. George, for instance, is conflicted about his past, knowing that he no longer resembles his family but also remembering that he came from them. He wonders if he is as different from his family as he first believed. The movie is very subtle, however, and that question is posed between the lines. What’s going on during George and Madeleine’s visit forces each character in the movie to rethink some of their assumptions about culture and identity.

It would be oversimplification to evoke the tired “red state vs. blue state” jargon, although this movie throws those disparate cultures into a fish tank to see what happens. The script does not condescend to either side, although there are some slight signs that the writer does not fully understand or sympathize with the religious mentality. The folk artist, for instance, is a barely veiled caricature of Howard Finster, who made eccentric religious art in northern Georgia. Finster’s art often depicted Scripture and historical events, but never was it obscene, unlike the artist in the movie whose art reliably features male genitalia. The artist character, a religious kook tucked away in the mountains, was too easy, and doesn’t do the rest of the movie justice.

JUNEBUG features some sexual content, but none of it is sensational. Those scenes will offend many audiences, but it is more important to telling the story than the sex in a run-of-the-mill action movie. The characters’ actions go a long way in revealing what their words cannot. In addition, there is some strong foul language that is less understandable.

Complex and subtle, JUNEBUG is not so far from a Flannery O’Connor story. It doesn’t offer a pat solution that will bridge the gap between George’s old and new lives, but it poses some fascinating questions.