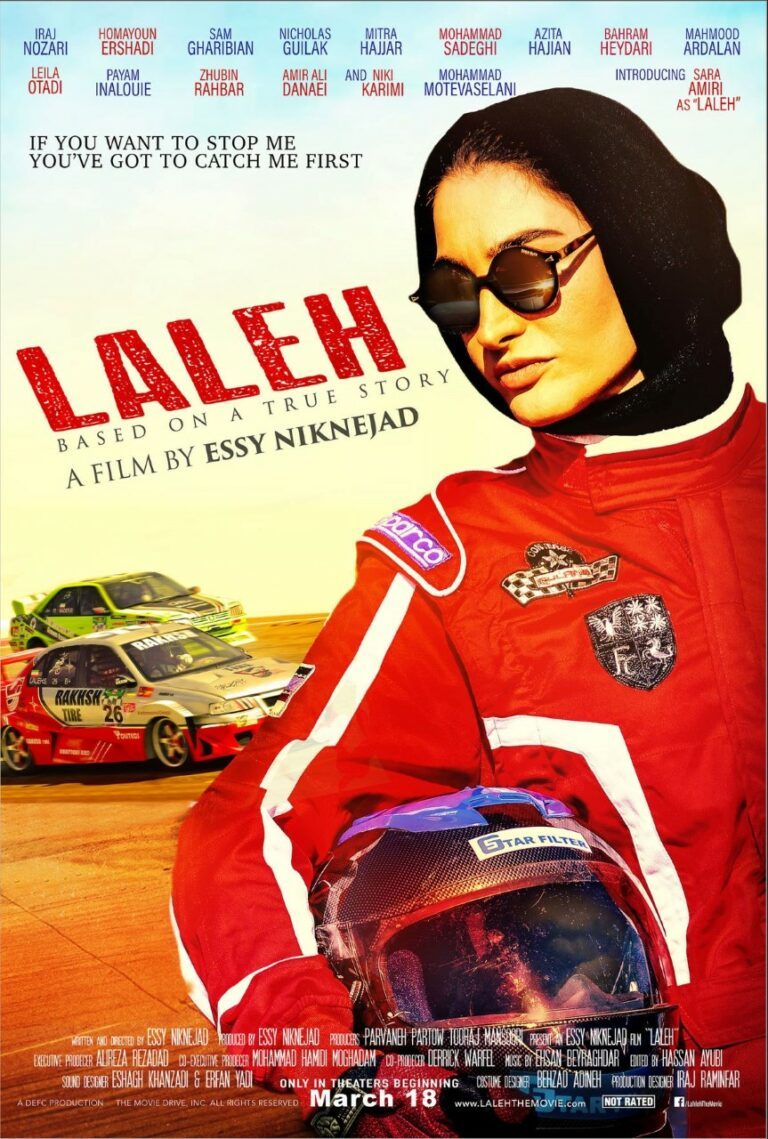 LALEH is a sports drama about a young woman in Iran who loves to drive fast and gets a chance to race cars in professional competition. Based on a true story, the movie opens with Laleh Seddigh driving her red sports car home from a vacation and running afoul of some male racecar drivers during a road rally. Laleh beats the men with her own driving skills. A racecar promoter sees what she did and offers to train her as a professional. Laleh agrees but runs afoul of three male drivers from the rally.

LALEH has some amazing racing footage and is well-acted. The dramatic interactions among Laleh, her parents and her two trainers are compelling. That said, the movie suffers from being too long and some awkward dialogue. Also, the bad guys are a little one-dimensional. LALEH stresses the courage and determination of its title character. Even better, it has a pro-family, moral worldview with some positive references to God and prayer. However, LALEH has some Romantic, feminist elements with some light references to Islam and 27 mostly light obscenities and profanities.

(BB, C, FR, Ro, Fe, LLL, VV, M):
Dominant Worldview and Other Worldview Content/Elements:
Strong moral, pro-family, slightly redemptive worldview argues that “standing up to injustice is priceless” and has a strong father-daughter relationship at the center, with some positive reference to the Creator God using the English word for God, but movie is set in the Islamic society of Iran though the Muslim references are a little vague (there are two scenes with Muslim calls to prayer in the background, women wear head scarves and man accuses bigoted bad guys of “taking advantage of our holy beliefs”), with some Romantic, feminist elements about achieving one’s dreams as a woman against male bigotry, plus man tells protagonist not to let the bad guys “get to you,” woman says, “I prefer to be an honest failure rather than be a corrupt winner”
Foul Language:
Slightly excessive foul language with 13 obscenities (“h” and “d” words), three GD profanities uttered by villain, and 11 light profanities such as OMG and for God’s sake
Violence:
Some string and light violence includes light race car accidents, woman driver gets deliberately bumped and her car tumbles multiple times and then one driver rams into her car as it rests upside down on the racetrack, unconscious female driver has some blood around her head as she’s removed from the wreck and is rushed to an operating room in a hospital, boy is dumped on the street outside his house, and it’s clear he’s been beaten up, boy tells parents and family that he and his family’s lives have been threatened if his older sister races in a car race, and male drivers deliberately bump woman’s car in second race, but this time some of them crash
Sex:
No sex scenes or sexual immorality, but woman has a male suitor
Nudity:
No nudity
Alcohol Use:
No alcohol use
Smoking and/or Drug Use and Abuse:
No smoking or drugs; and,
Miscellaneous Immorality:
Female driver faces male bigotry but overcomes, title character is betrayed twice but she overcomes, male drivers cheat to beat new female driver, and title character’s friend admits to being jealous.

LALEH is a sports drama about a young woman in Iran who loves to drive fast and gets a chance to race cars in competition after she accidentally drives into an ongoing road rally and embarrasses the male drivers. Based on a true story, LALEH has some amazing racing footage and is a well-acted family drama, but it’s a bit too long, has some awkward dialogue and contains some Romantic, feminist elements with a few toned-down Islamic references, mixed in with positive references to God and His divine providence and a few strong profanities and other foul language by the bad guys.

The movie opens with Laleh Seddigh and her best friend, Sanam, driving back to Iran in Laleh’s fancy red sports car from vacation on the Caspian Sea. Laleh ignores a sign saying the freeway is closed for a rally, and the two women are suddenly overtaken by two groups of men racing their cars. Laleh has a competitive spirit, so she speeds up and overtakes the men in their cars, causing one of them to have a minor crash and stall out. Of course, all this scares Laleh’s friend, Sanam, half to death.

Laleh reaches the end of the freeway leg of the rally. The men come in behind her and berate her for daring to interrupt their rally. However, a racing promoter named Nasiry offers Laleh his card and encourages her to come visit him if she’s interested in becoming a professional racer.

Back in Tehran, Laleh visits her father’s factory, where a labor dispute is occurring. The workers want a 10% raise, but Laleh’s father refuses to give them any raise. Studying for a Ph.D. in. industrial management and production, Laleh has a young brother, but her father has made it clear he wants Laleh eventually to run the factory until her little brother is old enough and experienced enough to join her. Laleh suggests to her father and the board of directors that the company should sell some of its unimportant stock and give the workers what they want, but only if the workers agree to working an extra half a day instead of just five days. A deal is struck, and everyone is happy.

That night, Laleh tells her father about the offer from Mr. Nasiry. He says he will investigate the man, and, if he checks out and Laleh still wants to try racing, he will support her. Nasiry checks out, and he agrees to help Laleh become the first female car racer in Iran. He puts her under the wing of a man named Arman, a mechanic and trainer whose son was killed during a race with some of the same men at the road rally. In addition to his racing training, Arman warns Laleh that the men she’s up against will stop at nothing to win and that’s what killed his son.

He starts Laleh out on a go cart course with some other new, male, drivers learning to race. When Laleh complains about starting out on such little cars, he reminds her that the great German driver, Michael Schumacher, and many others started out racing go carts. Laleh proves adept at the little cars and eventually wins a race.

Laleh recruits her fiend, Sanam to be the navigator on a rally from the Caspian Sea to the Persian Gulf. She comes in third in the race, but her success infuriates the male drivers, especially the three men who got upset with her in the beginning of the movie.

When Laleh decides to enter the national circuit race in Iran, the three men decide to do everything they can to stop her. She overcomes every obstacle they put in her way, but during the race, they deliberately cause her to crash, breaking her arm and putting her into coma.

So, the question becomes, will Laleh recover from the accident? Even if she does recover, will she decide to race again and, will her father allow her to race again?

LALEH the movie tells a truncated story about Laleh’s racecar driving career. For example, it only focuses on the one cross country rally to the Persian Gulf, but before she was allowed to join the Iranian Automobile Federation in 2004, she had already raced in 28 Non-Federation road rallies.

LALEH has some amazing racing footage and is a well-acted family drama. Newcomer Sara Amiri does an excellent job in the title role. Also good is Iraj Nawsari as Laleh’s dignified and caring father, Bahram Heydari as her first trainer, Arman, and Amirali Danaei as her second trainer, Reja. The interaction between the determined and fearless young woman, Laleh, and these three men is the heart of the movie.

That said, the movie suffers slightly by being so long, coming in at more than two and one-half hours. Also, LALEH has some awkward dialogue. For example, the three main villains in the movie are a bit too one-dimensional in the script. In addition, a few short scenes suffer from some low-budget overdubbing.

LALEH stresses the courage and determination of its title character. Even better, it shows that Laleh’s family is a close-knit family. They truly care for one another. Also, Laleh has a close relationship with her supportive father. As her father, Iraj Nawsari is a tower of strength. So, when Laleh suffers her big accident, the father’s concern for his daughter will bring viewers to tears.

LALEH the movie contains some positive references to God and His divine providence. Several characters pray to God. In one scene, Laleh prays to God while grasping a silver necklace with a silver dove at the end of it. However, the movie contains some subtle Muslim references. For example, in at least two scenes, an Islamic call to prayer is heard. One of those scenes shows Laleh in a full Muslim hijab while she meditates on God. The rest of the movie shows Laleh and other women wearing modern Muslim head scarves. Also, in one scene, a man accuses the bigoted bad guys of “taking advantage of our holy beliefs,” an implied reference to Islam. There are no scenes with mosques in them, though, and the Arabic word Allah isn’t uttered in the dialogue.

LALEH does contain, however, some Romantic, feminist elements that seem to go beyond merely a plea for equal justice for women. The real Laleh has been quoted as saying, however, “I’m not a feminist, but why should women be lazy and weak? If you’re determined, you’ve got to push. In this society, women are always like a poor people. They don’t believe in themselves. They have to believe in their inside power.”

Finally, LALEH is also marred by 27 mostly light obscenities and profanities, including several strong GD profanities by one of the three bad guys.

All in all, therefore, MOVIEGUIDE® advises caution for older children