LIFE IN A YEAR 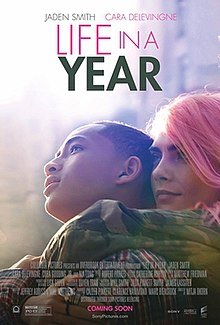 LIFE IN A YEAR follows a 17-year-old high school senior named Daryn, who’s pressured by his father, who has planned his son’s whole future, to get into Harvard. Daryn finds out the girl he loves, Isabelle, is dying of cancer. Tensions rise between Daryn and his father. They finally boil over after Daryn introduces Isabelle to his family. Isabelle comes from poverty and lives with a transgender caretaker. Daryn’s father sees her as a distraction, but Daryn decides to focus on giving Isabelle an entire life in the last year she has left.

Streaming on Amazon Prime, LIFE IN A YEAR contains some heartfelt, emotional moments. These moments are marred, however, by annoying exaggerated moments, a predictable storyline and spotty acting. LIFE IN A YEAR tries to bring something new to its predictable story, but the positive messages get lost in too many obscenities, a humanist worldview, some immoral teenage behavior, and a drawn-out running time. Ultimately, there are many better options for a similar story. For example, I STILL BELIEVE contains the strong Christian, moral values that LIFE IN A YEAR lacks.

(HH, B, C, Ho, LL, VV, S, N, DD, MM):
Dominant Worldview and Other Worldview Content/Elements:
Strong humanist worldview overall where characters live for themselves and disregard the consequences it may have on others and, while there’s mention of hope, death is seen as the end of the road, plus God is mentioned during a wedding ceremony briefly in the form of a rap song, and lead male character’s girlfriend lives with a transgender guardian
Foul Language:
21 obscenities (including one “f” word) and no profanities
Violence:
Teenage girl has cancer (which increasingly gets worse), and at one point she coughs up blood, there are scenes in a hospital, a couple high schoolers punch a bouncer more than once, they also throw a brick at his face, some blood is shown, a few fights while driving, and their car veers off the road and crashes, and a brief altercation between high school senior and his father
Sex:
Implied fornication, a man is shown reading a pornographic magazine, two characters get married in a strip club for transgender models and drag queens, the couple kiss multiple times throughout the movie, implied sex, and some references to a transgender character
Nudity:
Brief upper male nudity, and a teenage girl is in her underwear in several scenes, Alcohol Use/Abuse: No alcohol
Smoking and/or Drug Use and Abuse:
No tobacco smoking but teenager smokes marijuana for the first time and vomits; and,
Miscellaneous Immorality:
Stealing happens several times and is seen as a liberating activity with no consequences.

LIFE IN A YEAR is a new teenage romance from Columbia Pictures streaming on Amazon Prime and starring Jaden Smith and Cara Delevingne. The movie follows a 17-year-old high school senior named Daryn (Smith), who finds out that the girl he loves, Isabelle (Delevingne), is dying of cancer. His dad pressures Daryn to get into Harvard, but Daryn decides to focus on giving Isabelle a full life in the last year she has left.

LIFE IN A YEAR opens with Daryn, who lives in an affluent neighborhood in Pittsburgh, getting up early for a run. As the camera pans his bedroom, it’s revealed that Daryn is an accomplished high school runner. He gets distracted by rap music during his run. So, when he returns home, his father checks his running time, and it’s too slow. Consequently, Daryn sets out to do the run again.

As the story unfolds, the movie reveals that Daryn’s father is his biggest motivator and has planned out everything for Daryn. The ultimate goal is for Daryn to be accepted into Harvard. However, Daryn’s in his senior year of high school and wants to balance his college application with spending time with his friends, Kiren and Sammy. The three attend a rap concert but are too late and are forced to find another way into the show. While searching, they find a girl named Isabelle who’s also sneaking into the venue. The whole group of teenagers gets caught by the bouncer, and they leave the concert.

That night, Daryn becomes obsessed with Isabelle. He tries to track her down, but to no avail. However, the next day Daryn finds her on his morning run when he passes the ice cream shop where she works. After encouragement from his two best friends, he asks Isabelle out on a date.

At first, Isabelle is skeptical that Daryn would want to date someone as poor as she and vice versa. After a few dates, however, the two seem to be enjoying their time together. Daryn loves Isabelle, but when they go to make the next step in their relationship, Isabelle reveals she’s dying of cancer. Therefore, she says they can’t continue. Daryn must decide whether to focus on his father’s plan for him to attend Harvard or his dreams and love for Isabelle.

LIFE IN A YEAR contains some heartfelt, emotional moments. However, these are weighed down by annoyingly exaggerated scenes that fail to distract from the movie’s cliched, predictable teenage romance. It doesn’t help that the acting is spotty in places.

LIFE IN A YEAR tries to bring something new to the story of a girl with cancer and her dedicated boyfriend, but the movie’s positive messages of hope and love are lost in too many obscenities, a humanist worldview, some immoral teenage behavior, and a drawn out running time. Ultimately, there are many better options for a similar story, such as I STILL BELIEVE, which contains the strong moral, faith and biblical content that LIFE IN A YEAR lacks. MOVIEGUIDE® advises extreme caution.