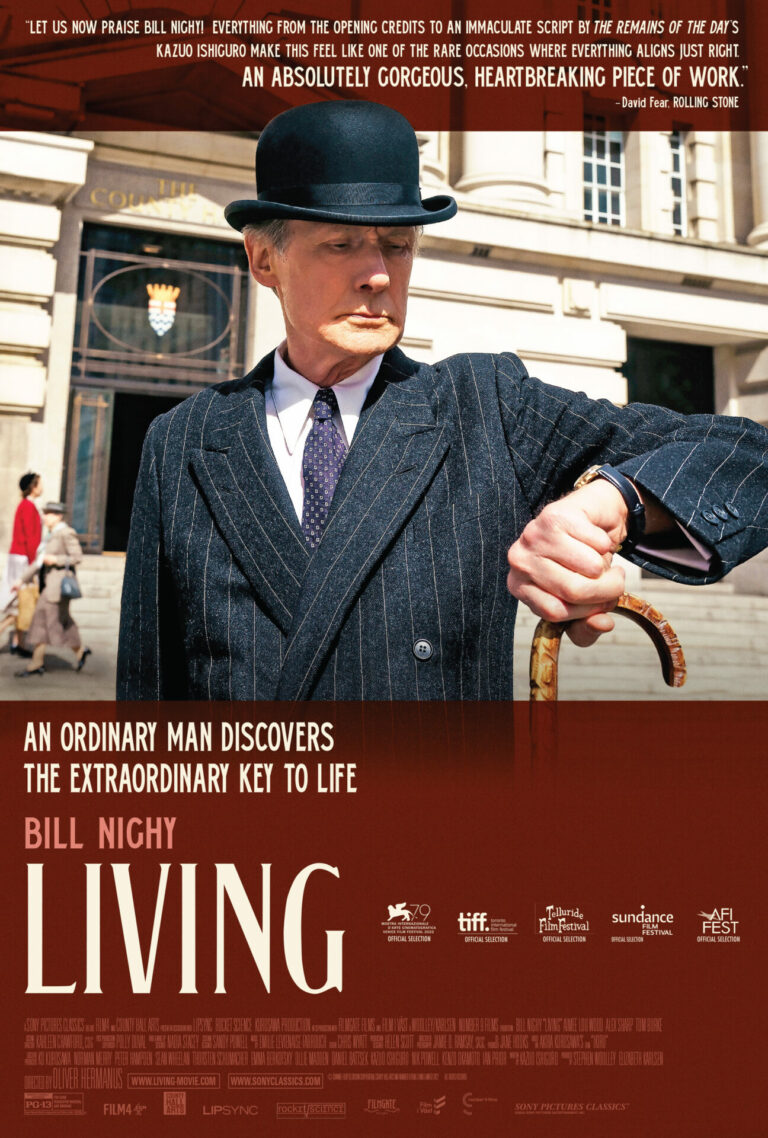 Set in 1950s London, LIVING is a drama starring Bill Nighy as a stoic civil servant in the Public Works Department named Williams. Williams discovers he has a fatal illness and decides to take some time off from work for the first time in his life. Williams starts spending time with a former colleague named Margaret. Margaret is the exact opposite of Williams. She’s passionate about living her life with vigor and joy. Margaret inspires Williams to live life to the fullest and do something more meaningful with his life.

LIVING is a British remake of an iconic 1952 movie by acclaimed Japanese director, Akira Kurosawa. Simple but beautiful, LIVING is a heartfelt look at the human condition and celebrates living a life of purpose. As Williams, Bill Nighy carries the movie to new heights with an incredible performance. LIVING is a celebration of life, but themes of death run throughout it. LIVING doesn’t approach death or the afterlife from a Christian, biblical worldview. It also has lewd dancing in a nightclub and a scene of drunkenness. So, MOVIEGUIDE® advises extreme caution.

(B, Pa, L, V, S, NN, AA, D, M):
Dominant Worldview and Other Worldview Content/Elements:
Light moral worldview about celebrating life and living a life of purpose and meaning, but there’s no regard for how the Bible talks about death and life, so movie is marred by some pagan elements
Foul Language:
Three obscenities
Violence:
No depicted violence, but there are discussions surrounding terminal illness, suicide and death
Sex:
No sex scenes, but there is some lewd dancing in a strip club, and two characters are seen kissing
Nudity:
Characters visit a strip club, and woman are seen in bikinis, one dancer removes her top, but it is shown from the back, but there is rear female nudity
Alcohol Use:
Men drink and smoke while at work, two characters get very drunk in one scene
Smoking and/or Drug Use and Abuse:
Men smoke while at work, and a character shows sleeping pills, insinuating that he thought about taking his own life;
Miscellaneous Immorality:
While LIVING deals with death in a heartfelt and gentle way, celebrating life, it doesn’t provide a biblical worldview to the problem of life and death.

LIVING is a drama starring Bill Nighy as a stoic civil servant in 1950s London who finds out he only has about one more year to live and decides to live a more meaningful life before he dies. LIVING takes inspiration from an iconic 1952 movie by acclaimed Japanese director, Akira Kurosawa, and tells a heartfelt, beautiful, uplifting story, but the well-made movie doesn’t have a Christian, biblical view of death or the afterlife and contains some lewd dancing in a nightclub, brief foul language and a scene of drunkenness.

Mr. Williams lives out his days working as a bureaucrat in the county Public Works department. He is stoic, never late and goes about his days in a monotonous but precise way.

However, when Williams finds out he’s terminally ill, with only about one more year to live, he takes stock of his life. Upon confronting his past and thinking about the legacy he may or may not leave, Williams befriends an ex-colleague, Margaret.

Margaret is the exact opposite of Williams. She’s is passionate about living her life with vigor and joy. Williams starts spending more time with Margaret. She inspires him to do something more meaningful with his life, outside of the job he’s done for his entire life. As Williams embarks on a journey to live life to the fullest, he’s able to take account of what really matters before his life comes to an end.

LIVING is a heartfelt look at the human condition and celebrates living a life of purpose. As Williams, Bill Nighy carries the movie to new heights with an incredible performance. While the movie is a celebration of life, themes of death run throughout the movie due to the lead character’s terminal illness. That said, the discussions surrounding death are gentle. However, they don’t approach death or the afterlife from a Christian, biblical worldview. MOVIEGUIDE® advises extreme caution for lewd dancing at a nightclub and a scene of drunkenness in LIVING.