"The Damaging Effects of Childhood Trauma" 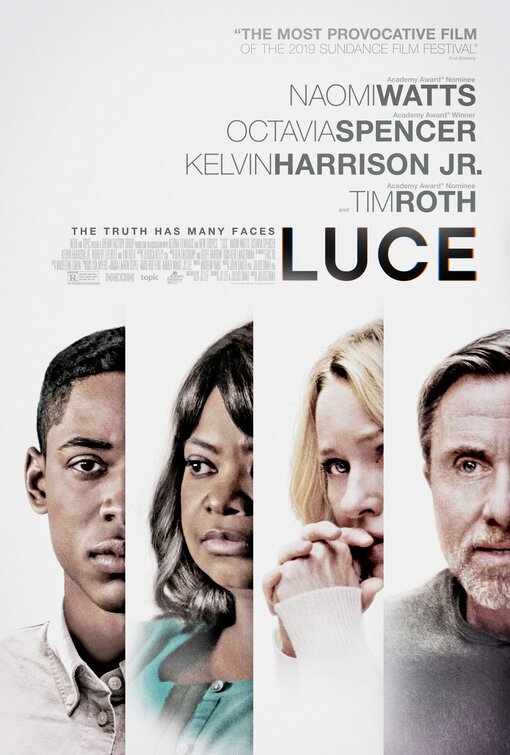 LUCE is about a high school senior trying to navigate his place in America despite a destructive past. A child soldier in Eritrea, Africa, where he was born, Luce was adopted by two upper middle-class Americans. They helped him work through his childhood trauma. Luce now seems a stellar student. He’s valedictorian of his class, an all-star athlete, and loved by his teachers, except his history teacher, who has some suspicions about him. She suspects Luce harbors some violent anger inside him. When she reveals her suspicions to his parents, they don’t react well. A heated conflict erupts.

LUCE is a riveting drama. The main actors deliver exceptional performances. The script is brilliant, with twists and turns in every scene. LUCE sheds light on issues like prejudice, racism, the power of manipulation, and the danger of stereotypes. The spine-chilling script showcases how childhood trauma can leave marks on one’s soul. However, evil eventually wins the day, and people lie to surpress the truth. LUCE also contains plenty of foul language, references to molestation, a couple sexual scenes, explicit nudity, and other immoral content.

(B, PaPaPa, LLL, V, SS, NNN, AA, DD, MMM):
Dominant Worldview and Other Worldview Content/Elements:
Light moral worldview, but evil wins in the end over integrity and truth, with strong pagan elements that include no mention of God, the Bible, or prayer, teenager leads a life of pleasure with a desire to be worshiped by those around him, teenager fornicates with his ex-girlfriend for his own benefit, teenager is a part of a group of boys that sexually molested a girl for their pleasure, troubled teenager works hard to seek approval from his parents and teachers and peers, and gets great satisfaction when he is being honored and praised, teenager comes from a war-torn dictatorship overseas which has seeped into his worldview, a teacher tries to bring the biblical virtues of truth and justice to the surface, teacher encourages a young girl who was sexually molested to speak up, teacher confronts troubled teenager about the vandalism he convinced his friends to do on her house, teacher demonstrates love and compassion as she cares for her mentally ill sister, and teacher expresses concern to teenager’s parent’s about his bad behavior based on his past life as a child solider, but [SPOILER] her efforts to make things right result in failure
Foul Language:
About 28 obscenities (including at least one “f” word), zero profanities, some “n” words, and parents curse in front of adopted teenage son
Violence:
Light physical violence includes two boys get in a fight and push each other around in the locker room, sister spits on other sister’s car, vandalism takes places when boys spray paint rude racial epithet on teacher’s house, fireworks explode and set the school on fire (nobody is hurt but smoke and flames are depicted), and discussion of a past sexual assault
Sex:
Depicted marital sex, depicted fornication in one scene between two teenagers who sneak away, and implied sexual molestation when young girl confesses and says she was gang raped at a party (scene is not shown)
Nudity:
Extreme nudity when mentally ill woman rips off all her clothes in the middle of the school lobby where her entire body is exposed, wife shows exposed breasts when she has marital relations with her husband in shower, and image of two teenagers fornicating is blurred out but boy backside and young girl’s naked silhouette are visible
Alcohol Use:
Parents drink wine every night with dinner and before bed, mom uses wine to calm down after a stressful day, young girl confesses she got too drunk at a party while drunk boys took advantage of her and molested her (this scene is not depicted)
Smoking and/or Drug Use and Abuse:
Boys smoke marijuana at a party, track player gets caught smoking and loses his scholarship (the movie takes place in a state where marijuana isn’t legal), and a young girl believes someone may have drugged her at a party, but she can’t remember because she was drunk; and,
Miscellaneous Immorality:
Heavy miscellaneous immortality includes lying, manipulation, moral relativism, racism, prejudice, stealing, jealousy, pride, selfishness, and dysfunctional family situations.

LUCE was first shown at the Sundance Film Festival, where it received critical acclaim for its rock-solid acting performances and script. In the movie, Luce, a high school senior has paved his way to a highly successful future. He is valedictorian, a top-notch speaker, captain of his track team, and adored by all his teachers. However, he has an unsettling past that one teacher believes still lives inside him.

Luce was born and raised in the war-torn country, Eritrea, Africa. He was one of the many child soldiers who learned to hold and shoot a gun before he could write. When he was 10-years-old, two Americans adopted him to raise him as their own son. Amy and Peter spent years of time and money getting Luce the therapy and special attention he needed to recover from his childhood trauma. Luce is now preparing to graduate, and it appears he’s a changed person.

However, after Harriet Wilson, Luce’s history teacher, instructs her students to write an essay from a historical figure’s point of view, she’s alarmed when she reads what Luce has written. Luce has written from the point of view of a leader who believes murdering people who wronged you is okay. This essay prompts Harriet to search his locker where she finds a bag of explosive fireworks. She calls Luce’s mother, Amy, in for a parent teacher meeting and gives her the essay and the fireworks. She asks Amy to please speak with her son about the fireworks because Harriet knows their discovery could damage Luce’s future.

Amy gets home and explains to her husband, Peter, what happened. Peter concludes nobody knows their son better than they do, and they shouldn’t be concerned by an essay and some fireworks. Amy hides the fireworks and decides not to tell Luce about what happened that day. However, that evening, Luce opens the cabinet for a glass of water and discovers the essay and fireworks hidden in the back. He quickly realizes his teacher gave his mother these items.

The next day at school, Luce waits back after class to speak with Harriet. He explains to her that the Fourth of July is his favorite holiday, which is why he had fireworks. He makes a subtle threat to her about the damage fireworks can do, and Harriet promptly orders him to leave.

That evening, Harriet calls Peter, Luce’s father, and informs him that Luce threatened her that day. That evening, Peter speaks with Luce about the threat. He’s aware of the effects that being a child solider can have on the mind and is concerned about Luce. When he brings it up to him, Luce tells his parents that he and his friends share lockers and the fireworks weren’t his. In a heated argument, Amy and Peter are forced to decide who do they believe? Were the fireworks his friends? Did he threaten his teacher? Amy immediately sides with Luce, but Peter is furious and thinks Harriet Wilson is on to something.

After this intense argument, strange things begin to happen to Harriet. Her home is vandalized with a racial, sexist epithet. Her mentally ill sister is dropped off at the school, where she runs around naked and has a mental episode.

Meanwhile, rumors float around the school that a young girl was sexually molested by some boys. Harriet urges the girl to speak up. The girl first tells Luce’s mother, Amy, that she was sexually molested, after Amy reaches out to her on Facebook. Amy is concerned her son may have had something to do with the terrible incident. Although the girl says he didn’t, Amy is left with an unsettling feeling. Later in the movie, the girl goes to Harriet Wilson and confesses the truth, that Luce was one of the boys who hurt her. So, Harriet and the principal call a meeting with Luce’s parents to decide what to do, but will the parents tell the truth?

LUCE is a riveting drama that keeps viewers on the edge of their seats. Kelvin Harrison Jr., Octavia Spencer, Naomi Watts, and Tim Roth deliver exceptional performances. The script is also brilliant, with twists and turns in nearly every scene. LUCE sheds light on issues like prejudice, racism, the power of manipulation, and the danger of stereotypes. The spine-chilling script showcases how childhood trauma can leave marks on one’s soul. However, evil eventually wins the day, and people lie to cover up the truth. They also give excuses to each other for lying. In effect, the people turn a blind eye to the evil among them. LUCE also contains plenty of foul language, references to molestation, a couple sexual scenes, explicit nudity, and other immoral content. Though the movie doesn’t actually endorse the final outcome, the ending will leave the viewers unsettled and horrified.