"There and Back Again" 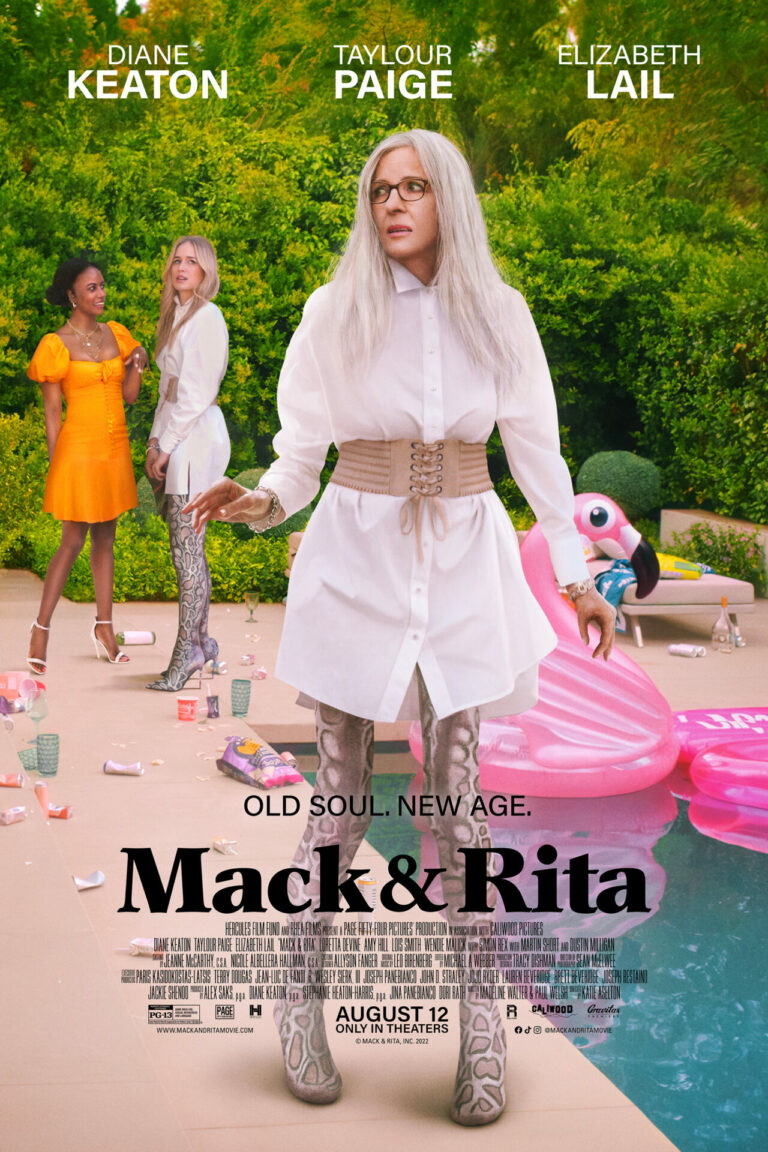 MACK & RITA follows the story of Mack Martin, a 30-year-old writer who’s always felt 70-years-old at heart. Striving to act like a 30-year-old, she never masters what other girls her age enjoy doing, especially drinking and partying. She heads to Palm Springs for a bachelorette trip, only to be reminded how much of an old woman she is at heart. Disappointed she can’t force herself to party with the other women, Mack wanders into a past life “regression” tent. The experience transforms her into a 70-year-old woman! She starts calling herself Rita, Mack’s elderly aunt.

MACK & RITA has a few laughs. However, once Mack transforms into Rita, the plot becomes several sporadic scenes where Rita interacts with stereotypes instead of real people. MACK & RITA has a positive moral worldview about embracing your authentic self, no matter your age. It also extols moral principles like love, truthfulness, kindness, and doing the right thing, and rebukes hatred, greed and revenge. However, MACK & RITA is marred by excessive foul language, some lewd jokes, several scenes of drunkenness, and New Age content.

(BB, Ro, PaPa, FR, O, Ho, LLL, S, AA, DD, M):
Dominant Worldview and Other Worldview Content/Elements:
Strong moral worldview where a young woman is a kind person who aims to do the right thing, though her insecurities and desperation to fit in with her peer group mold her to make decisions that aren’t true to her authentic self, moral principles of love and truthfulness are extolled while hatred, greed and revenge are rebuked, but marred by some Romantic elements that view people as essentially good at heart, and by some pagan elements that highlight a non-traditional belief system such as protagonist turns to a New Age, past life regression tent for guidance to address her struggles in life and finds herself magically transformed into a 70-year-old woman, plus there’s a lesbian reference in one scene
Foul Language:
17 obscenities (including two “f” words), a Jesus profanity, and about 12 light profanities
Violence:
No violence
Sex:
Light sexual content includes some lewd comments about sex (mostly used for comedy), a 70-year-old woman makes out with a 30-year-old guy, some other light kissing, and a lesbian reference
Nudity:
No nudity
Alcohol Use:
Social drinking, girls drink at a restaurant for a bachelorette party and get drunk, old women drink wine together and get drunk, and scenes of women indulging in alcohol as a recreational hobby
Smoking and/or Drug Use and Abuse:
No smoking but woman drinks a psychedelic mushroom concoction, in a misguided attempt to return to her younger self; and, Miscellaneous Immortality: Some lying.

MACK & RITA is a comedy about a 30-year-old social media influencer who attends her best friend’s bachelorette party in Palm Springs and visits a New Age tent where she’s mysteriously transformed into a 70-year-old woman, so she pretends to be her Aunt Rita. MACK & RITA has a few laughs and extols moral principles like love, truthfulness, kindness, and doing the right thing, but it feels like a string of sporadic scenes with stereotypical characters and contains excessive foul language, some lewd remarks, New Age references, and substance abuse, including several scenes of drunkenness.

Mack Martin is a 30-year-old female author turned social media influencer. Unable to find the inspiration to write another book, Mack’s been forced to accept brand deals as an influencer. She tries to take “fun” photos for uninspiring brands, but it all feels so heartless and forced. At her core, Mack is an old soul who prefers to read books, wear oversized sweaters and stay home. She doesn’t want to go to parties or get wasted. Her attempt to fit is pushed further when she travels to Palm Springs for her best friend’s bachelorette party.

Once there, it’s clear the bachelorette activities, drinking and going out, are becoming too much for Mack. Carla, her best friend, let’s her know it’s okay if she doesn’t get out and party. Mack goes back to their rented house for the weekend. However, on her way back, she decides to try out a past life transformation tent out of desperation to feel more like a 30-year-old girl and less like a 70-year-old woman. She slips into a tanning bed, posing as a past life transformation bed, to find her true self. When she emerges from it, with the help of spiritual guru guiding her through the process of transformation, she discovers she’s been turned into a 70-year-old woman, her true self. Horrified at the site of her new appearance, elderly and gray-haired, she races back to the house where her best friend agrees to help her try to get back to her true age, a 30-year-old.

There’s still one problem, she’s 70-years-old! This is when Rita is born. Mack creates Rita, her aunt who’s staying in Mack’s apartment while Mack is away at a writer’s retreat. As Carla suggests various ways for Mack to try out in hopes of turning back into her real age, Mack, as Rita, begins to blossom into her authentic self. She joins an older ladies’ wine club, she dresses how she prefers (in oversized, comfy clothes) and allows herself to open to her cute younger neighbor, Jack. She and Jack develop a relationship that quickly turns romantic. Though the viewer knows Rita is actually Mack, it can’t go without saying how terribly uncomfortable it is to watch a 70-year-old intimately kiss a 30-year-old man.

As Rita continues to shine, she becomes a very popular social media influencer. Her social media followers grow so vastly that she’s invited to lead a live event. However, though she benefits by being seen and loved by so many people (for being so authentic), she misses her friend Carla’s rehearsal dinner. In this moment, Rita realizes it’s good to be your true self, but not to let it get in the way of your relationship with people who have always loved you for your true self, like your best friend.

Will Mack return to her younger self? Will she make amends to her friend, Carla?

Viewers will get a few minor laughs from MACK & RITA. However, once Mack transforms into Rita, the plot feels like a string of sporadic scenes with Rita (played by Diane Keaton) interacting with stereotypes instead of real people. As a result, the story lacks real tension or conflict. After a while, viewers may not want to watch another influencer, a stuck-up book agent, or shy love interest. They’ll want to see an actual person not a stereotype. Things take a further turn when a discomforting love montage explodes between the 70-year-old Rita and her 30-year-old neighbor, Jack. The pair eventually fall for each other and make out, which is as unsettling to watch as it is to imagine. The movie’s highlight is the older women in Rita’s wine club. Their sass, wit and humor are about the only worthy thing in MACK & RITA.

MACK & RITA has a positive moral worldview about embracing your authentic self, no matter your age. As such, it extols moral principles like love and truthfulness and rebukes hatred, greed and revenge. Also, the lead character is a kind person who aims to do the right thing. However, the movie’s moral worldview is marred by Romantic elements and New Age references. MACK & RITA also contains an excessive amount of foul language and some lewd remarks. In addition, the movie has several scenes of drunkenness and a scene where the title character drinks a psychedelic mushroom concoction, in a misguided attempt to return to her younger self.