"It’s Never Too Late To Choose the Right Path" 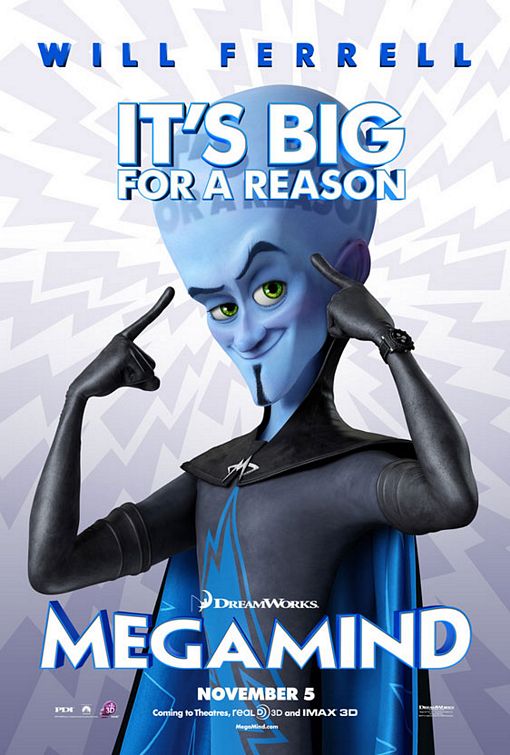 MEGAMIND features the title character super villain battling his archenemy super hero, Metro Man. During one of their confrontations, Megamind actually kills Metro Man, and soon Megamind discovers he needs a superhero to battle. So, he sets out to train Hal, a student, to become the superhero Titan. But, Titan actually turns evil and plots to ruin Metro City. This causes Megamind to have to actually come to save the day. He likes this role and becomes a hero. A final twist, and his love for a female reporter, ensures Megamind’s transformation from villainous zero to helpful hero.

There’s lots to enjoy in MEGAMIND. The animation is high quality and there are many laughs, even for adults. Will Ferrell and the DreamWork’s animators do a good job of bringing Megamind to life. Megamind is ultimately a story of redemption, the need for good to combat evil, and the ability to choose to lead a good life after making poor decisions in the past. The take away message is that it is never to late to seek redemption. There are some scary elements, however, that may not be appropriate for very young children.

(CC, BBB, Pa, L, VV, M) Strong Christian, redemptive worldview of villain turning into hero, with very strong moral elements of good winning over evil mixed with a pagan idea looking out for oneself; no obscenities, one profanity, few uses of term “no freakin’ way”; strong slapstick animated action and comic violence including fighting and explosions, character pretends to torture another character off screen amid screams, hero character dies in explosion leaving only his skeleton wearing a cape – though later we learn he isn’t dead; flirting and mild kissing between characters but no salacious sex; no nudity, main female character is “curvy” but dressed modestly, close up on main character’s tight leather pants; no alcohol; no smoking or drugs; and, character wears t-shirt that says “Bite Me” along with rock music soundtrack from song, “Highway to Hell,” though edited so the term hell is never used.

In the beginning, the dueling superheroes are sent as infants from another planet, similar to Superman. However, once on earth, Metro Man was taken in by a loving family but Megamind ended up as the ward of a local prison.

The rivalry between Metro Man and Megamind develops throughout their childhood, as they attend a local school together. Disappointed he’s unable to gain approval from others the way Metro Man does so easily, Megamind decides to become a super villain instead.

The battle between super hero and super villain soon becomes legendary in Metro City, with Megamind bumbling his way through terrorizing the city while Metro Man gallantly stymies his villainy. The humble citizens are so grateful for their hero that they erect huge statues and shrines to Metro Man.

One day when Metro Man is called to save a reporter named Roxanne, Megamind kills Metro Man in an explosion. Emboldened by his triumph, Megamind takes over the city, engaging in all sorts of goofy vandalism that “terrorizes” citizens. After a brief period of reigning over Metro City, Megamind discovers he feels empty. Evil no longer seems fun without a nemesis to thwart his plots. So he trains Hal, a student, on how to be a super hero. However, Hal, now called Titan, actually turns evil. So, it’s up to Megamind to save the day! A final twist, and his love for Roxy, turns Megamind from villainous zero to helpful hero.

Underpinning this good-versus-evil tale is also a love story between Megamind and Roxy. By changing his appearance to look like an average citizen, Megamind is able to spend time with Roxy without her realizing it’s the villain she despises for destroying Metro Man. When she finally discovers the truth, Roxy is angry, but finds forgiveness for the villain-turned-hero after he saves their beloved Metro City.

There’s much to enjoy in MEGAMIND. The animation is high quality and there are many laughs, even for adults, in this comedy. Will Ferrell and the DreamWork’s animators do a good job of bringing Megamind to life. There’s also some fun music.

Megamind is ultimately a story of redemption, the need for good to combat evil, and the ability to choose to lead a good life after making poor decisions in the past. The take away message is that it is never to late to seek redemption, even after making terrible mistakes. It also reaffirms the truth that evil is unfulfilling and that good will always rise up to defeat evil.

Young children may be a bit scared when Metro Man dies, leaving only his skeleton and cape. There are a few “edgy” elements, noted in the CONTENT section above, but overall this is a fun movie that, with caution, can be enjoyed by older children and adults.

Presented with numerous opportunities to return to his evil ways, the villain Megamind chooses to move forward with pursuing good, and the love of the woman who makes him want to be a better man. He also comes to realize the value of the friendship he shares with his assistant, Minion, who aids him in saving Metro City and gaining the reputation of a hero. In the end, the villain finds redemption and embraces heroism over the villainy of his evil past, showing that it’s never too late to choose the right path.