THE BOOK OF ELI

"Walk by Faith, Not by Sight" 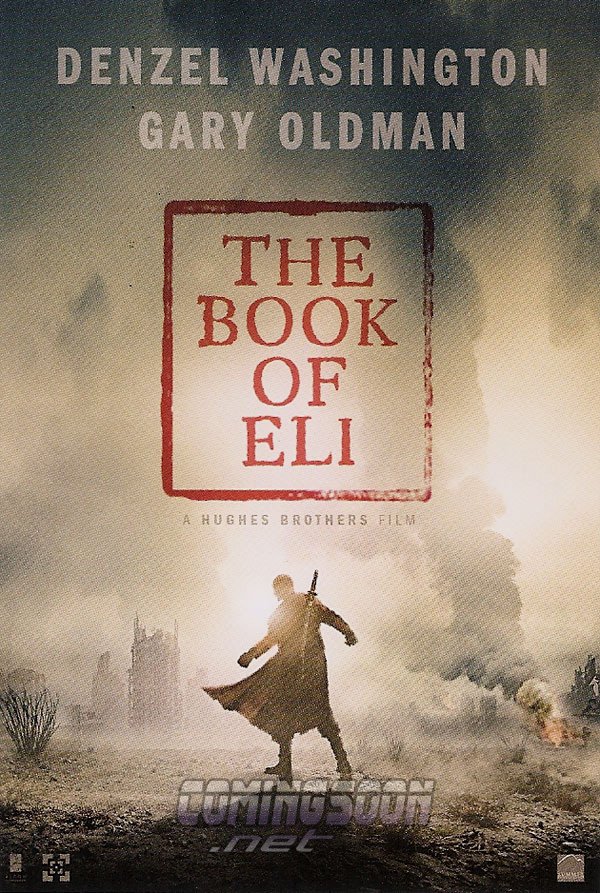 THE BOOK OF ELI stars Denzel Washington in a post-apocalyptic thriller set 30 years after a final war has turned much of Earth into an ashy wasteland. Washington plays Eli, a laconic man journeying westward across America to carry a sacred book to safety, hoping that it will restore mankind and bring a better future. Along the way, he is aided by a young girl, Solara, who desires to learn more Eli’s faith and the book he carries. Eli and Solara face opposition from evil men who want to use the book for their personal gain.

THE BOOK OF ELI is very captivating, awe-inspiring, and ultimately uplifting, with excellent production standards and absorbing character portrayals. The movie’s blatant support of Christianity and the overt references to the Bible are greatly encouraging and very surprising. Throughout the story, Eli prays, teaches others to pray, quotes Scripture, and walks by faith in God. Regrettably, extreme caution is advised for the movie’s excessive amount of extreme, brutal violence, some scenes of implied, attempted rape, and unnecessary foul language. It may be difficult for many viewers to sit through some of the violent scenes.

(CCC, BB, LL, VVV, S, N, A, M) Very Strong Christian worldview, including themes of sacrifice, where the protagonist constantly prays, shows others how to pray, quotes Scripture, and, though he is not perfect, constantly tries to live what he believes and consistently walks by faith in God, not by what he can see, and evil antagonist tells his henchmen to burn all of the books that they bring him (one of which is THE DA VINCI CODE) because they are not the book he wants and knows holds power, plus strong moral themes of hope, love, and justice; 21 obscenities and one profanity; extreme, brutal violence depicted including man abuses his wife by pulling her hair, man is found after having hanged himself, multiple scenes of blood spurting after people have been shot and limbs have been cut off with a samurai-like sword, men fire guns and heavy artillery, men get sliced with sword, man is shot in private area with an arrow and man gets shot in the neck with an arrow, men get shot in the head and all of it is completely shown, man gets beheaded by sword, lots of punching, brawl fighting, lots of explosions with hand grenades and grenade launcher; man uses a derogatory word to encourage his men to fornicate, men rape a woman but cameras cut out before anything is shown, young girl tries to seduce older man but he rejects her because it is wrong, one scene of attempted rape where girl is rescued before it actually happens, and in the background of a brief camera shot a couple of men are shown trying to rape women, but no explicit sexual activity depicted; upper male nudity, female cleavage in a couple of scenes, and brief upper female nudity but nothing is explicitly shown; alcohol used depicted where men are encouraged to “get slammed” and men drink alcohol in a bar setting, but no blatant drunkenness shown; no smoking or drugs; and, some references to cannibalism, man turns away from coming to the aid of people in crisis and tells himself to “stay on the path, it’s not your concern,” but his perspective changes in the end as he realizes that he needs to live the truth he has learned, and evil antagonist wants to get his hands on the sacred book because he wants to use it as a weapon to control the minds and hearts of the people, but he gets his comeuppance in the end.

Set in a post-apocalyptic future, THE BOOK OF ELI, is the captivating story of a man on a quest across the desolate wasteland of America to bring a sacred book to a safe location. Along the way, he is aided by a young girl who desires to learn more about the book, and he faces opposition from evil men who want to use the book for their own personal gain.

Thirty years after a final war has wiped out most of the planet, leaving it in dry, ashy ruins, Eli (played by Denzel Washington) walks across what is left of America carrying with him a sacred book that he hopes will restore mankind and bring about a better future. Every day he reads the book and trusts the voice he hears telling him to head west to find a safe place for the book. Driven by his commitment and guided by his beliefs, he is not a man to be easily deterred by anyone or anything. As he nears the end of his travels, he meets a young girl, Solara (played by Mila Kunis), who becomes intrigued by Eli and his faith, especially after he shows her how to pray, which is something she has never done before. In her desire for hope and to know the truth in the book that he carries, she joins Eli on his mission. Eventually, he accepts her companionship after rescuing her from some men attempting to rape her.

Solara’s evil stepfather and self-appointed leader of a town of thieves and gunmen, Carnegie, portrayed brilliantly by Gary Oldman, is also intrigued by the book but for different reasons. For years, he has searched for the book, understanding the power that its words hold for mankind. He seeks to harness that power for himself and to use the words of the book to control the hearts and minds of the remaining populace. After discovering that Eli carries the book he desperately wants, Carnegie pursues him with the intent of killing him and keeping the book for himself.

As Eli flees with Solara further westward, his interactions with her teach him to live out the truth he has learned even if that means giving up his own life and the book for someone else’s. He realizes that he has placed the book itself at a greater value than helping humanity, and that truth cannot be contained in just words alone but must be practiced.

As he is coming to this realization, their travels lead them into a final confrontation with Carnegie where his faith is truly tested as they have no choice but to stand and fight against evil.

THE BOOK OF ELI is very compelling and awe-inspiring, with excellent production standards as well as absorbing character portrayals by Denzel Washington and Gary Oldman. The movie’s blatant support of Christianity and the not-so-subtle references to the Bible are greatly encouraging and very surprising for a major theatrical release. Throughout the movie, the character of Eli prays and even teaches Solara how to pray who in turn teaches her mother. He consistently quotes Scripture and is shown reading the sacred book, committing it to memory. Eli also tells Solara to walk by faith and not by sight. At the end of the movie Eli says, “I fought the good fight, I finished the race, I kept the faith.” Thus, the movie has several very uplifting moments.

It is abundantly clear that the character of Eli has faith in God and lives by that faith no matter the circumstances or obstacles that arise. His character truly believes that the words of truth he carries will build a better future for the ravaged planet, and nothing in the story contradicts his beliefs. The bad characters are clearly bad and justice is served in the end. Even during a confrontation with an evil henchman, Eli tells him that he will be held accountable for all the things he has done.

Regrettably, extreme caution is advised for the movie’s excessive amount of extreme, brutal violence as well as some scenes of implied rape and attempted rape, and an unnecessary amount of foul language. It may be difficult for many viewers to sit through a few of the scenes because the violence is at times so abrupt and unexpected, almost shocking. Please see the content section for a more complete explanation of the objectionable material.

Watch THE BOOK OF ELI: