"Smart and Thrilling but the Ending Is Maddening" 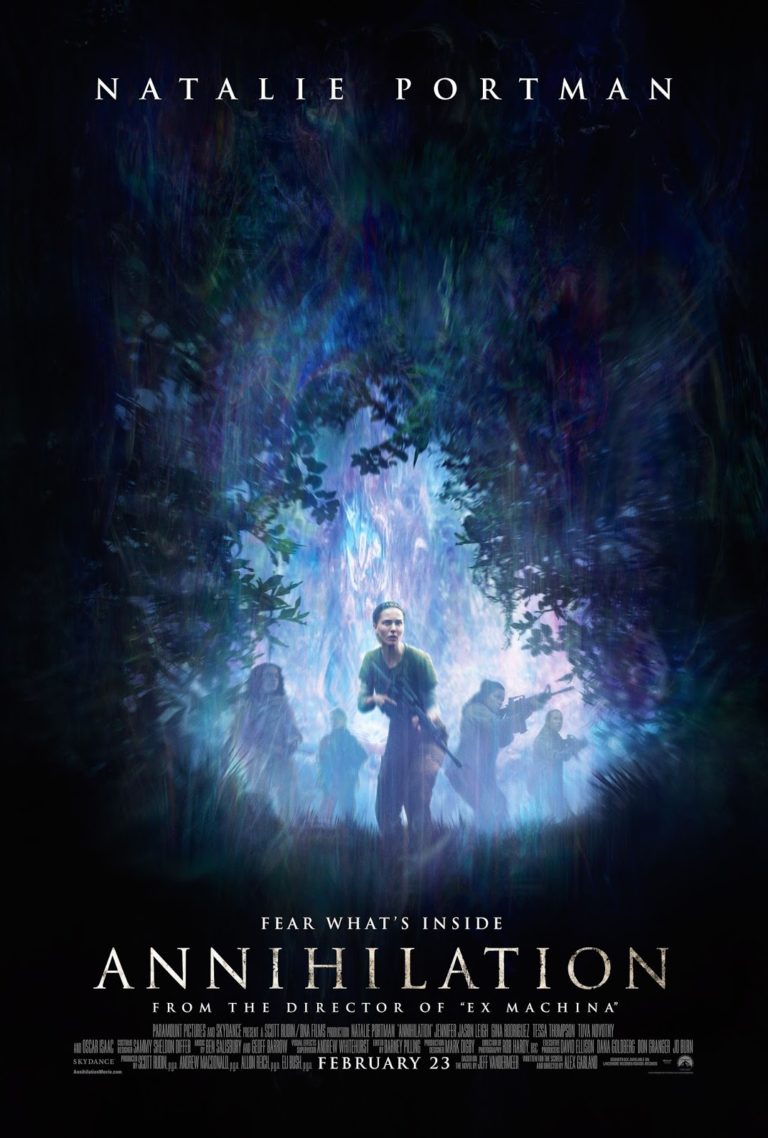 ANNIHILATION is a scary science fiction movie about a five-woman team of scientists, who head into a mysterious force field to see whether it has malevolent intentions. The team is led by Lena, a female soldier turned biologist whose husband showed up bloody and deranged after visiting the force field area. A slow-building sense of dread ends when the women start encountering scary, vicious and mutated animals and reptiles behind the force field barrier.

ANNIHILATION is a masterpiece of mood, emotion and atmospheric tension. The movie relies on smarts and emotions as much as scary moments, before annihilating most of the goodwill it’s built up with an absolutely maddening ending. There are some interesting philosophical discussions about what drives people to risk their lives. There’s a brief debate about God’s existence that answers in the affirmative. Finally, the performances are excellent, especially Natalie Portman’s. However, the ending opens the door to a sequel by having evil survive. ANNIHILATION also contains frequent (but often brief) bursts of extreme, bloody and strong violence with plenty of strong foul language. So, MOVIEGUIDE® advises extreme caution.

(PaPa, HH, CC, BB, Ab, LLL, VVV, S, N, A, M):
Dominant Worldview and Other Worldview Content/Elements:
Strong mixed pagan worldview with humanist elements where evil seems to end and continue in the end, which sets things up for a sequel but a brief debate over God’s existence ends on the side of belief and troubled women begin to work out their problems and issues and risk their lives for each other against animals and reptiles that have been mutated into monsters by a mysterious force with an unknown agenda and source;
Foul Language:
At least 29 obscenities (mostly “f” words) and two or three profane uses of JC;
Violence:
Frequent but often brief extreme, very strong, gory, bloody, and strong scary violence brief includes man starts having profuse internal bleeding before getting taken off an ambulance (terrifying his confused wife), video shows man sticking knife into a fellow soldier and carving a giant hole in his abdomen to reveal a giant snake-like creature slithering within him in a very graphic and bloody way, a giant mutated alligator with extra rows of teeth attacks a woman and pulls her underwater before she’s rescued by fellow females on her team, woman kills mutated alligator in a hail of machine-gun fire, woman is abruptly taken by a giant bear in the middle of the night in a night-vision sequence, woman’s bloody and bitten body is found later in the woods, woman turns on three others and ties them to chairs and gags them before knocking one in the head with her rifle butt, woman with the rifle is attacked by the giant mutated bear with a hideously scary face and roars with the sound of a dead person’s screams, terrifying sequence where bear sniffs around several women, bear mangles woman’s body, hideous and creepy mutations are seen all throughout some woods, large web-like tumors grow on the sides of buildings, [SPOILERS FOLLOW] man blows up a clone with a hand grenade, seemingly insane female talks into space before having a stream of light and fire pour out of her mouth and this sets off flying stars that eventually latch onto another female’s eye and pulls part of it out, and another clone is exploded via a hand grenade;
Sex:
Two scenes of partially depicted adultery and a married couple is seen kissing and flirting in bed, the man shirtless and the wife wearing panties;
Nudity:
Upper male nudity is shown in a couple bed scenes;
Alcohol Use:
No alcohol use;
Smoking and/or Drug Use and Abuse:
No smoking or drugs; and,
Miscellaneous Immorality:
Light miscellaneous immorality when in-fighting arguing, lying and betrayal occur among team members.

ANNIHILATION is a scary science fiction movie about a five-woman team of scientists, led by one woman who’s a former soldier, who head into a mysterious force field to see whether it has malevolent intentions. The movie seems to promise a different, smarter and more emotion-driven take on the average space-monster genre flick, with Natalie Portman delivering an intense, multi-layered performance as Lena, an Army veteran-turned-biologist.

Lena leads a group of women on an expedition to find out what is behind a mysterious force called “The Shimmer,” which has the potential to endanger the entire planet. The movie relies on smarts and emotions as much as scary moments, before annihilating most of the goodwill it’s built up with an absolutely maddening ending.

The story opens on Portman’s Lena shown in mourning over her husband Kane (Oscar Isaacs), whom she believes has been killed while on a covert ops mission. He went on the mission a year ago, and she hasn’t seen or heard from him since then. However, after a powerful montage of memories, Kane suddenly appears in their home with an utterly vague explanation of where he’s been, only to suddenly start bleeding internally.

As Lena races to a hospital in an ambulance with Kane, they are suddenly stopped by a team of government operatives on the highway and taken into custody. Waking up in a mysterious cell on a government compound, Lena finds Kane strapped to a gurney on life support.

A psychiatrist named Dr. Ventress (Jennifer Jason Leigh) tells Lena that Kane had been on a mission to discover what was inside a lighthouse wherein a mysterious force has centered its power. The feds call the force “the Shimmer.” The Shimmer appeared out of nowhere three years before and has been slowly growing and consuming everything in its wake, forcing every creature in sight to mutate into disturbing new life forms.

Kane may have returned from his mission a bloody and deranged mess, but he was the only one in his team to come back at all. Driven by a need to know what happened to her husband, Lena, an Army veteran and an expert with a machine gun, insists on joining Dr. Ventress as she leads a team of female scientists into the Shimmer in the hopes of stopping it once and for all.

Much of what follows is a masterpiece of mood, emotion and atmospheric tension, as Writer/Director Alex Garland (adapting a novel by Jeff VanderMeer) avoids easy shocks to really dig into the sadness that’s motivating each woman to risk their very lives for this cause. That slow-building sense of dread pays off terrifically when the few key action sequences do appear, with the women fighting off vicious mutated beasts like a giant crocodile with multiple rows of massive teeth or a giant bear whose roar sounds like the dying screams of the team member it slaughtered earlier.

There are also some interesting philosophical discussions about what would drive someone to be willing to risk their lives in such a terrifying way, and what kind of situations can human beings endure. There is also a lightly portrayed, brief debate between Lena and her husband about whether God exists and if He really cares about every small detail of our lies. This debate mostly ends on a pro-God note.

Portman delivers an amazing performance in ANNIHILATION, moving from the throes of grief to impressive resolve repeatedly throughout the film, and Leigh has her best role in ages as Dr. Ventress (she’s much better here than in her Oscar-nominated turn in the ultraviolent THE HATEFUL EIGHT). Ultimately, however, the movie falls apart as Portman makes her final advance against the Shimmer, with an utterly inscrutable and bizarre ending that left the entire audience gasping with frustration and talking angrily on the way out of the theater. Giving away the ending would be impossible and unprofitable, because it completely lacks any sense. Writer/Director Alex Garland has crafted other challenging films that paid off all the way through, but he blows it all here in the closing moments. At the very end, though, the movie sets things up for some sequels. The evil that the Shimmer brings seems to survive, setting the stage for more deaths in the sequel.

ANNIHILATION has frequent (but often brief) bursts of extreme, bloody, strong violence with plenty of strong foul language. It also has a strong mixed worldview with an ending where evil seems to win out (at least until the next sequel), mitigated by some strong positive content, including a debate about the existence of God that mostly answers in the affirmative. MOVIEGUIDE® advises extreme caution.