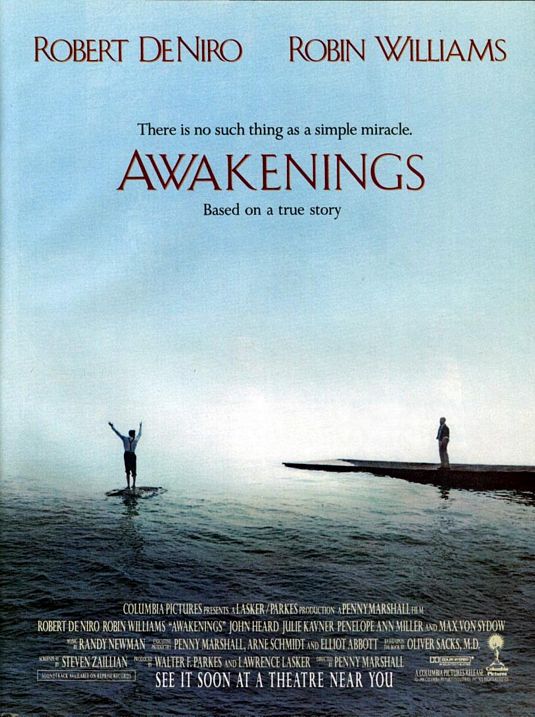 Based on Dr. Oliver Sack’s best-selling book about his attempts to revive 10 catatonic patients in a Bronx hospital in 1969, AWAKENINGS is a true-life story about Leonard Lowe, a man lost in a sleep-like state, aware yet unable to speak or move for 30 years. Robin Williams plays Malcolm Sayer, the eccentric doctor who alone believes that Lowe, played by Robert De Niro, is sentient inside and miraculously brings him back into the world.

As a neurologist who has just finished doing five years of research on worms, Dr. Sayers has never worked with people, but applies anyway for a job at the Bronx Hospital. Since there are no other applicants, he is offered a position as Head of the Neurology Department and is given charge of the most severe cases. These are patients who have been in a trance-like catatonic state, able to eat and some even to walk, though they are stiff, with their actions sometimes suspended in mid-air like statues. Truly, they are a pathetic sight.

Dr. Sayers notes that all ten of these patients have been survivors of the encephalitis epidemic of the 1920s. However, because the symptoms of the disease took 8 to 10 years to manifest, the diagnosis had been missed.

Although the rest of the hospital staff has given up on these people, Dr. Sayers notes a response when he throws a ball at them–they catch it! Believing that they are not brain dead, but just needing to be revived, Sayer looks for a key and finds it in the experimental drug L-dopa being used to help people with Parkinson’s disease. Sayer obtains permission to try the experimental drug on Leonard Lowe, a man who has been in a catatonic state for 30 years.

It works, and Leonard comes to life, awakened from when he went to sleep at age ten. For the first time, he begins experiencing things like shaving and courtship, as he keeps his doctor, a solitary and reclusive man, up late into the night talking, discovering and sharing.

Filled with joy and boundless enthusiasm, Leonard is still confined to the hospital. Wanting out so he can walk the streets, talk to people and experience life on the outside, his request is turned down, since the drug is experimental and he is still under observation. He is a prisoner once more.

As for the other nine people, they are administered the drug and also “awake.” The nurse exclaims, “It’s a f—— miracle!” (the movie’s only obscenity). One man is bitter, though, feeling cheated of all those years; another woman, who went to sleep at 22, finds her now white hair needs tinting. Yet, most are elated to “be back.”

The drug, however, has only provided a `chemical window,’ as it soon begins to lose its potency and effectiveness. Leonard, intelligent and conscious of what is happening, begins to deteriorate.

“Has it all been worthwhile?” the doctor asks himself. AWAKENINGS leaves the answer for the viewer to determine. It is interesting to note that the deceptive, contemporary, humanistic question, “Is this life worth living?” is not pondered. The viewpoint on the patients is sympathetic and the dignity of human existence upheld. However, no mention is made of the Almighty, of a sovereign God who works above and beyond our circumstances. “I was given a perfect child at birth,” says Leonard’s mother, “I never thought to ask: ‘Why me?’ [However,] when my child became ill, I asked ‘why me?'” Nevertheless, at times, the movie seems to communicate the biblical principles: be joyous about life, and grateful for what you take for granted.

It is interesting to note how the doctor, who spends his life alone, also lives in a shell. “I’m not very good with people,” he says, yet his interest in his patients belies that. So while Sayers is helping Leonard out of his shell, Leonard is helping Sayers out of his. Thus, there are two awakenings, as Sayers comes to the realization that all that matters is friends, family and work.

Both performances by doctor and patient should net Academy Award nominations for Williams and De Niro. AWAKENINGS is a thought provoking and engrossing movie, and the fine execution of its sensitive story by director Penny Marshall will perhaps fetch her a nomination, too. It should be noted that a Ouija board is used as a clinical tool to help Leonard communicate, but not as a medium to communicate with spirits. Furthermore, AWAKENINGS is a sad movie because, although joy, hope and the invincibility of the human psyche are exalted, there is no mention of God.

Writer: Steve Zaillian, BASED ON THE NOVEL BY: Oliver Sacks