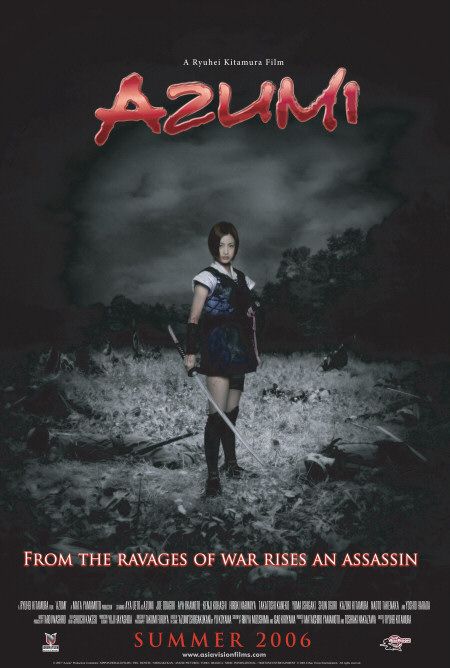 AZUMI is a Japanese samurai movie about an orphaned young girl named Azumi. A master samurai takes in Azumi and several other children to train them as samurai assassins and ninja. Years later, the young Azumi goes on a mission with her master and five other young assassins. Their mission is to assassinate three warlords who are creating brutal chaos in Japan, preventing it from uniting. Azumi goes along with her master's plan, but his callous attitude toward their task raises moral qualms in her heart. She overcomes her qualms, however, as the brutality of the warlords becomes more clear and as the second warlord's men pick off her companions one by one.

AZUMI is slow getting started, and the acting is uneven and sometimes unconvincing. The moral dilemmas that the characters face are interesting ones that might make discerning viewers think twice. Also, the villains they face are clever, truly mean and sometimes funny, though often sadistically so. Moreover, the second half of the movie does contain some entertaining, spectacular action sequences. Ultimately, however, much of the violence and the constant killing are excessive, as is the movie's pagan worldview and resolution.

(PaPaPa, FRFR, B, LL, VVV, S, A, D, M) Very strong pagan worldview, with Buddhist priest advocating assassination to stop chaotic brutality and evil, greedy warlords ravaging his country, plus heroine and other characters ponder some moral issues and questions; 10 obscenities and man goes to urinate in one scene; extreme violence including blood spurts and sprays, arm chopped off, at least two decapitations, countless swordfights, some gunfire, throats slit, attempted rapes, people fall and leap during much fighting, innocent villagers and women murdered by evil men working for evil warlords, man dying of wound from poisoned knife, suicide, and explosions; evil men try to rape women but they are killed before any clothes are taken off; no nudity; some apparent alcohol use; brief smoking; and, assassination schemes, callousness, talk of luck, and warlords rebuked.

Before showing his Japanese samurai thriller to a packed audience at the Los Angeles premiere, the director of AZUMI promised the crowd that the movie contains plenty of “killing and killing and killing” and plenty of “action and action and action.” He was certainly right about this thriller based on a popular Japanese comic book, or manga (pronounced with a hard “g”). The movie also contains, however, some solid character drama and moral dilemmas to support the story’s nearly constant action violence and bloodletting. That said, the movie’s excessive killing and bloodletting are often designed just to satisfy people’s bloodlust.

AZUMI opens in Japanese feudal times with a dirty orphan girl weeping by her dead mother’s body. A man and four children appear. The man comforts the girl and takes her with them.

Flash back to an earlier scene where the man, a samurai warrior named Gessai, is being advised by his Buddhist priest that Japan will never see peace and unity so long as the warlords ravage the countryside. The priest tells the man that assassinating the leading warlords is the only answer.

About 12 years later, Gessai, is instructing 10 young assassins, including the little girl, Azumi. The assassins have finished their training, and they are now ready for their mission, which is to assassinate three warlords trying to overthrow the rightful rulers of Japan. Before they start their mission, however, Gessai orders the 10 assassins to pair up. He then orders them to kill their partner. If they cannot kill their partner, then they are not fit to be an assassin and must leave. With some pain and hesitation to varying degrees, five of the young assassins fight and kill their partner, including Azumi, even though she seems to be the most troubled of all.

Having accomplished their awful task, the five remaining assassins set off with Gessai, their master, to kill the three warlords. Using her innocent looks, Azumi dispatches the first warlord with ease, but the second warlord and his lieutenant turn out to have some dastardly tricks up their sleeves.

Azumi goes along with her master’s plans, but his callous attitude toward their task raises moral qualms in her heart. For example, in one early scene, Azumi gets upset when her master tells his five remaining students not to stop a brutal attack on innocent villagers by a warlord gang, because it will distract them from their mission. Despite her qualms, the greater evil of the chaotic and brutal warlord system, and Azumi’s concern for her fellow assassins (who are committed to destroying that system), keep stopping Azumi from totally abandoning her master and friends, and the mission.

AZUMI is slow getting started and the acting is uneven and sometimes unconvincing or over the top. For instance, the prowess of the young assassins is not believable. Once the story gets started, the moral dilemmas Azumi and her cohorts face are interesting ones that might make discerning viewers think twice. Also, the villains they face are clever, truly mean and sometimes funny, though often sadistically so. Finally, the second half of the movie does contain some entertaining, spectacular action sequences. These qualities help pass the time between all the bloodletting.

Ultimately, however, much of the violence and the constant killing are excessive, as is the movie’s pagan worldview and plot resolution. The movie eventually seems to agree with the samurai master and his priest, that assassinating evil leaders is the best way to end a chaotic, violent situation when brutality and greed rule a society.

Although the Bible does not condemn people for defending themselves against evil, violent men (look at Abraham waging war to free his kidnapped brother, Lot, in Genesis), it is also true that God eventually honored the peaceful, loving evangelism and faith of the early Christians with an end to the chaos and brutality that was the Roman Empire. As many noteworthy historians have proven, the early Christians, advocating love and peace, helped to diminish the brutality of paganism, including the brutalities of war and slavery. It is also true that, after modern Japan became unified under its Emperor, the ruling samurai class and other Japanese leaders, following the beliefs of Shinto Buddhism, instituted a system of political assassination that led to or supported one of the most brutal fascist, military dictatorships ever seen in human history (see the book MODERN TIMES by historian Paul Johnson, published by HarperCollins).