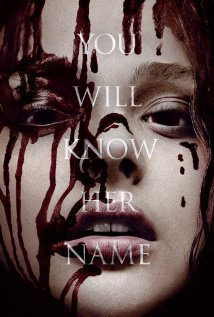 Based on bestselling author Stephen King’s first novel, CARRIE is a remake of the 1976 movie with Sissy Spacek. In the story, some teenage girls severely bully a shy teenage girl with a mentally disturbed religious mother and telekinetic powers. One of the girls tries to make amends by making her boyfriend ask Carrie to the prom. He asks Carrie, and Carrie starts to blossom. However, her mother is dead set against this plan and tries to stop it. Carrie foils her mother with her telekinetic ability to manipulate objects and people. Everything seems to be going well until Carrie’s nemesis hatches an evil plot to humiliate Carrie at the prom.

The new CARRIE is an earnest production, with top Hollywood talent, but the ending offers nothing really new. Also, the final scene lacks the original version’s stylish jolt. At one point, Carrie rebukes her mother’s aberrant interpretation of the Bible and says, “The LORD is good.” However, the movie still seems to belittle strong Christian beliefs otherwise. Also, the ending isn’t redemptive, but tragic. CARRIE does contain some positive moral points, but it’s unacceptable viewing overall.

(PaPa, O, B, C, RoRo, PCPC, AbAb, Ho, LLL, VVV, SS, N, A, MM) Strong mixed pagan worldview with an occult theme of telekinesis power but the power is viewed as a natural power, with some moral messages and Christian references, including teenage girl tries to make amends for wrongdoing and teenage protagonist in one scene rebukes her religious mother’s aberrant interpretation of Scripture with a correct view and says, “The LORD is good,” but movie overall has a Romantic, politically correct view of Christianity and the Bible that, at best, is confused, and, at worst, deliberately abhorrent, plus one light reference to homosexual behavior; about 27 obscenities (including six or so “f” words), six strong profanities, 10 light profanities, and an obscene gesture; some very strong and strong violence with blood includes bloody birth scene, girl uses telekinetic powers to slam objects into people and force people to move or stop them from moving, pig’s blood spilled all over girl, boy kills pig with hammer off screen, teenager girl’s relationship with nutty mother goes from bad to worse and mother stabs daughter in back and tries to kill her but daughter uses telekinetic powers to impale and crucify her, people slammed between two objects, car crashes twice and a person’s head slams into windshield, girl’s head penetrates car windshield and she has glass sticking out of her face, girl uses telekinetic powers to crash and explode car, bucket hits boy on head and kills him, and girl gets menstrual blood on her hands and shows it to people and they get it on their clothes; depicted fornication between teenagers, teenage boy makes lesbian reference to two girls lying on bed but nothing happens, and verbal references to “intercourse”; upper male nudity; verbal reference to spiking a punch bowl but teenage boy was just kidding and villainous teenagers may or may not be holding beer bottles in one scene; no smoking or drug references; and, severe bullying but rebuked, mean teenagers set out to humiliate viciously another teenage girl, dysfunctional family relationship, revenge.

Based on bestselling author Stephen King’s first novel, CARRIE is a remake of the 1976 movie starring Sissy Spacek. The project seems somewhat worth doing until the ending, which lacks the shock and creativity of the original movie, directed by Brian De Palma. Like the original movie, however, CARRIE tells a lurid tale of a bullied teenage girl with a mentally disturbed mother and telekinetic powers.

The new movie begins with the birth of Carrie White. Her mother, Margaret, thinks God is punishing her with cancer, but when she sees the baby start to be born, she starts to stab her to death with a pair of scissors. However, she relents and hugs the newborn baby to her bosom.

Cut to Carrie’s senior year in high school. Carrie is extremely shy and retiring. She cowers in the swimming pool during gym class. Later, in the locker room, Carrie starts to take her shower and unexpectedly starts to have her first menstruation. Sheltered by her deeply religious mother, Carrie screams at the sight of her own blood and the other girls ruthlessly tease her about her ignorance, led by a girl named Chris. One of the girls, Sue, is ashamed, however, and stops teasing Carrie.

To make things up to Carrie, Sue asks her boyfriend, Tommy, to take Carrie to the prom instead of her. Tommy reluctantly agrees. He asks Carrie, and Carrie starts to blossom. However, her mother is dead set against this plan and tries to stop it. Carrie foils her mother by using her telekinetic powers to manipulate objects and people.

Everything seems to be going well until Carrie’s nemesis, Chris, hatches an evil plot to humiliate Carrie at the prom.

Like the original 1976 movie, the bullies get their just desserts. However, a lot of other people are killed and injured when Carrie unleashes her full powers. So, Carrie and her mother [SPOILER ALERT] also have to die. Thus, CARRIE turns out to be a tragedy as well as a horror movie.

The new CARRIE is an earnest production, with top Hollywood talent, but the ending offers nothing really new. Also, the final scene lacks the stylish jolt the original version gave audiences way back in 1976, nearly 40 years ago! So, if nothing really new or different is being added, and the final scene is not as memorable as the original, it’s hard to see the purpose of doing this remake.

Like the original movie, however, this CARRIE has some Anti-Christian themes. The title character’s mother is a religious nutcase with a weird interpretation of the Bible. At one point, the mother forces Carrie into a closet with a statue and picture of Jesus, as punishment. To the movie’s credit, Carrie tries to correct her mother’s interpretation at one point while also telling her, “The LORD is good.” In the end, however, the two females can’t reconcile with one another and this ends in a tragedy with no redemptive outcome. That said, the bullying of Carrie is rebuked in the movie and kindness toward outcasts is depicted, so CARRIE isn’t completely awful or abhorrent overall, though it has some abhorrent content in it.