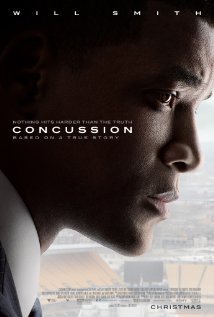 CONCUSSION stars Will Smith as Dr. Bennet Omalu, a Christian forensic pathologist from Nigeria working at the coroner’s office in Pittsburgh. Dr. Omalu does an autopsy of a famous but troubled Pittsburgh Steelers football player, who died at 50, and orders some tests on the man’s brain. The tests reveal that his mental problems may have been the result of repeated blows to the head, both small and large. Dr. Omalu convinces some other doctors to publish a paper on this and other football player autopsies. The paper stirs up the animosity of the National Football League and its supporters, upsetting the doctor’s life and that of his wife.

CONCUSSION is a compelling drama with a solid performance by Will Smith and other cast members. Even better, it has a strong Christian, moral worldview which links God with Truth, Faith, Wisdom, Compassion, American liberty, and scientific knowledge. The movie’s jeopardy, however, is not as consistent as it could have been. CONCUSSION also contains a couple “f” words, several strong profanities and other foul language, plus some violence. So, extreme caution is advised.

(CC, BB, PC, Acap, PP, LL, VV, N, A, D, M) Strong Christian, moral worldview about a Christian pathologist from Nigeria trying to get people to be concerned about his scientific findings about the dangers of brain damage among a certain percentage of football players, including a prayer, a visit to a church, images of crucifixes, a talk with a Catholic priest, protagonist’s wife talks about him being appointed by God to find what he found and not to give up pleading his case, woman tells husband to “trust God’s wisdom,” an implied reference to Intelligent Design, movie also links God with Faith, Truth, Compassion, American liberty, and scientific knowledge, protagonist is concerned about telling the truth and encouraging others to tell the truth to help people he feels are in danger, with some light politically correct elements where movie only uses comments from real-life Democrats in Congress about the issue in the movie, along with some negative comments about business, particularly the National Football League, but the NFL officials remind people that they give jobs to many people and do lots of charity work, and protagonist has a positive view of America and is offended when other Americans who oppose him want him to shut him up about a truth he has discovered; 13 obscenities (including one or two “f” words), five strong profanities and two light exclamatory profanities; sometimes disturbing violence includes some football scenes of hitting and tackling and leaping, emotionally disturbed man smashes objects and puts his hand around wife’s throat but then leaves, man tasers his leg and dies of a heart attack, disturbed man gets angry, images of corpses, pregnant woman and her unborn baby get sick, upset man smashes wall of his house out of frustration and pain, implied suicides, long distance shot of a fiery crash on a freeway, and it’s said that a man committed suicide by drinking antifreeze; no sex, but unmarried kiss; upper male nudity; alcohol use; brief smoking and man appears to be “huffing” an inhalant of some kind; and, threats, people refuse to acknowledge truth, uncaring people.

CONCUSSION is a drama starring Will Smith as the Christian Nigerian doctor who exposed a new danger of brain damage among professional football players in America that allegedly can lead to mental illness, dementia and even suicide. CONCUSSION is a compelling drama, with a solid performance by Will Smith and some positive Christian content extolling God’s wisdom and faith, but the drama lacks consistent jeopardy and contains plenty of strong foul language.

The movie opens with scenes of Pittsburgh Steelers star center Mike Webster giving a speech at the stadium thanking the fans and praising his teammates. Cut to 2002, with forensic pathologist, Dr. Bennet Omalu, testifying that an accused murderer could not have committed the crime. A native of Nigeria, Omalu lives in Pittsburgh, where he works in the Allegheny County Coroner’s office performing autopsies.

Cut back to Mike Webster, who’s living in his car and suffering debilitating headaches and depression. His friend becomes worried about him, and former Steelers physician, Dr. Julian Bailes, is at a loss to explain Webster’s condition, because his CAT scans show no rain damage. One day, to ease the pain, Webster shocks himself with a taser and dies of cardiac arrest.

Dr. Omalu examines Webster’s body during the autopsy and finds evidence of trauma other than just a heart attack. He orders numerous tests on Webster’s brain, at his own expense. This upsets one of his co-workers, a doctor who’s apparently hated Omalu since he arrived in the coroner’s office.

Meanwhile, at church, Dr. Omalu’s priest asks him to take in a young Nigerian woman, Prema, to live in the doctor’s spare room. He reluctantly agrees, and Prema is amazed at his generosity in agreeing to help another person in need.

Dr. Omalu soon gets Webster’s brain tissue tests back. They definitely show signs of trauma. So, Omalu shares his findings with his boss, with Dr. Bailes, and with a couple other doctors. They decide to publish a paper in a medical journal on the particular kind of trauma Omalu found, which he labels chronic traumatic encephalopathy, or CTE for short.

The paper soon causes a sensation in the sports world and, of course, upsets National Football League officials and many football fans. At about the same time, Dr. Omalu and Prema fall in love and get married. Prema soon becomes pregnant. However, the public animosity from Dr. Omalu’s findings, which are confirmed by tests on two other football players who committed suicide, starts to build undue pressure on the doctor and his pregnant wife.

Will Dr. Omalu and his wife’s marriage and personal happiness survive the animosity? Will he ever convince the NFL to do something about the problem of CTE?

CTE used to be solely identified with the sport of boxing, as in the terms “punch drunk.” It’s a progressive degenerative disease due to repeated blows to the head that can eventually cause memory loss, aggression, depression, and confusion, sometimes allegedly leading to suicidal tendencies. So far, however, it can only be diagnosed posthumously.

CONCUSSION clearly sides with those doctors, like Dr. Omalu, most concerned about the effects of repeated blows to the head in American football. It’s a compelling drama about Dr. Omalu’s personal involvement with the subject. Eventually, Dr. Omalu and his wife move to California, where he became Chief Medical Examiner of San Joaquin Valley. The NFL also now acknowledges a problem and has made several rule changes, but it still denies how widespread the problem is. One of the problems is that the doctors studying CTE are focusing only on clear cases of brain trauma, often following unnatural deaths due to suicide.

Despite some dramatically powerful scenes, CONCUSSION lacks a consistent level of jeopardy. At first, the only jeopardy comes from Dr. Omalu’s rival in the Pennsylvania coroner’s office where he works. Then, the jeopardy switches to the NFL officials, who demand a retraction of Dr. Omalu’s first paper. Eventually, his wife’s pregnancy becomes endangered because of the stress she and her husband are feeling. Because of the stress, they eventually decide to move to California.

That said, one of the highlights of CONCUSSION is its repeated reference to Dr. Omalu and his wife’s Catholic faith. Dr. Omalu prays in one scene. In another scene, he tells another doctor about the woodpecker, whose tongue is wrapped around its brain to protect it as it pounds its beak against various trees, a natural defense that the human brain does not have. The human brain is not designed to play modern football, he claims. Thus, his speech in this scene echoes the idea of intelligent design in nature, an implied reference to a Designer or Creator. Finally, in another scene, Dr. Omalu tells his wife that the freedom that occurs in America is part of God’s plan, but now he’s offended that some Americans want to shut him up about what he has found. Dr. Omalu’s wife assures him, however, that their coming to America and his findings about CTE are not a coincidence, but are also part of God’s plan. She tells her husband to trust God’s wisdom and continue to speak out. Embrace the truth you have found, she adds, and nothing created by man can really bring you down. “If you don’t speak for the dead, who will?” she asks her husband.

Thus, CONCUSSION has a strong Christian, moral worldview where God, Faith and Truth, Compassion, American liberty, and even scientific knowledge, are specifically linked. Sadly, though, CONCUSSION contains a couple “f” words, several strong profanities and other foul language. There are also some portrayals of mental disturbance and implied suicide. So, extreme caution is advised.