"Comic Artist Strikes Out, on His Own" 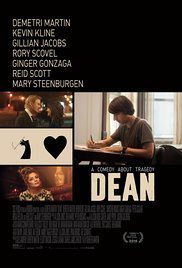 DEAN is a romantic comedy about a cartoonist struggling to move forward after his mother’s death. Dean flounders in his attempts to establish a more meaningful relationship with his father and to finish his third book. In order to recharge his batteries, Dean takes a trip to California. There, he falls head-over-heels for Nicky, a woman who seems to have the same happy-go-lucky personality he does. However, she’s hiding a dark secret, and a meaningful life lesson.

DEAN has a lot going for it. There are some genuine laughs, including several cartoons. The acting is also good, especially by Kevin Kline as Dean’s father, Gillian Jacobs as the love interest, and Peter Scolari in a cameo. Ironically, Writer and Director Demeteri Martin executes the movie’s poignant message of grief and compassion better than its comedy, which is uneven at best. The movie’s moral landscape is confusing, however, and includes implied adultery. Also, many of the jokes fall flat and contain excessive foul language and amoral lewd scenes. Ultimately, the jokes and dramatic ending are too thin to carry DEAN’s plot along.

(PaPa, RoRo, CC, BB, LL, V, SS, N, A, MM) Strong mixed pagan worldview with Romantic elements stressing the power of romantic love, including sex, to heal grief, but mixed with strong Christian moral elements such as man makes the Sign of the Cross in prayer, a Celtic Cross tombstone in the background, a priest performs a wedding ceremony, a sign for “La Luz de Jesus Gallery” (“The light of Jesus gallery”), and the movie ultimately teaches you can’t run away from your problems, and we should have compassion on everyone; 18 obscenities, three strong profanities, three references to off-camera urination, two separate depictions of men urinating by the roadside, one of a dog doing the same, and “humorous” cartoons include a non-graphic drawing of testicles, a drawing of feces and numerous depictions of death; violence includes a non-graphic cartoon of a football player kicking another player’s head off, six depictions of guns in an artistic context, and one slap; sexual content includes one scene showing a couple lying next to each other apparently naked after implied immoral sex, a poster of a five quick kissing scenes, four references to premarital sex, implied adultery without apparent regret, and a reference to “masturbate” in a song lyric; woman holds a bottle over her bare chest, a scene of implied nudity, and a non-graphic drawing of male private parts; three scenes show light drinking; and, miscellaneous immorality includes a dysfunctional relationship where father and son continually lie to one another.

DEAN is the big screen acting, writing and directorial debut of standup comic Demeteri Martin. The freshman effort deserves credit for not sticking to light material but rather tackling themes like death, delayed maturity and strained family relationships. However, it has some problems.

Demeteri stars as Dean, a comic artist dealing with the death of his mother, his broken engagement, professional malaise, and a distant father who derides him as a vacant-eyed hippie. Having missed the deadline for his new book of comical cartoons, and desperate to slow down the sale of his boyhood home, he flies to California.

While in Hollywood, Dean meets Nicky (Gillian Jacobs), a spunky, happy-go-lucky woman who seems to be exactly what he needs. Only after they connect romantically does he learn that she’s hiding a painful secret of her own. However, he’ll learn a life-changing lesson from his trip.

Ironically, Writer and Director Demeteri Martin executes the movie’s poignant message of grief and compassion better than its comedy, which is uneven at best. Martin obviously plumbed the depths of his soul after the death of his own father, a priest in the Greek Orthodox Church. His soliloquy at the end of the movie, explaining what he’s learned about death and bereavement, nearly redeems the entire movie.

The movie’s moral landscape is confusing, however. Most of DEAN’s substance comes from the title character’s father, Robert, played by Academy Award winner Kevin Kline. Robert is portrayed as religious and loyal to his wedding vows, even after his wife’s death. Even when the script gives him little to use, Kline, a consummate actor, allows sensitivity to pour through his eyes and physical expressions. Although he’s portrayed as the stereotypical goofy dad, in the end his maturity contrasts with Dean’s attempt to deal with his pain through another romantic relationship. If the viewer learns to imitate Kline’s character instead of Dean, he will learn a valuable lesson. However, this lesson isn’t assured because of the movie’s confused moral tone, which includes implied adultery without remorse.

That said, DEAN has a lot going for it. Gillian Jacobs is able to give Nicky’s character depth that can only be sufficiently appreciated in retrospect, after we learn her secret. The movie is also notable for a cameo appearance by Peter Scolari, who co-starred in the early 1980s sitcom BOSOM BUDDIES alongside a fresh-faced Tom Hanks. Scolari effectively conveys a range of emotions during his brief moments on screen.

There are some genuine laughs in DEAN, including several of the cartoons (which are drawn by Martin). Kate Berlant almost steals the movie in a brief but perfectly pitched cameo as a grating airline passenger. However, several of the jokes and sight gags are simply offensive. When the humor falls flat, it really falls flat. Consequently, whole scenes obviously intended for laughs don’t even raise a smile. Briga Heelan’s character, Becca, is intended to portray the idiosyncrasies of California, but we’ve seen the same character played to perfection in other, better movies, such as L.A. STORY or ANNIE HALL. Here, it seems like a rehash.

The soundtrack adds to the experience, despite one off-color lyric. Everything works except the script. The jokes are simply too thin to carry the plot along, especially with such a dark motif as death. Also, the movie’s excessive cursing, including using the Lord’s Name in vain, and its amoral sexual scenes requires strong caution.

Martin told ENTERTAINMENT WEEKLY, “I hope that, even if a big audience doesn’t see the movie, people who have money to make movies will see it and go, ‘Cool, cool, we see what that guy can do. We’ll take a chance on him.’”

Hopefully, Hollywood will take another chance on Martin, whose first effort has a lot of heart and promise despite falling short.