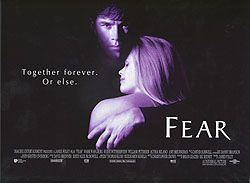 FEAR is a a violent and sex filled thriller designed for the teenage market. This is definitely another girl meets boy, boy turns out to have a dark side and begins to stalk girl's family movie. In an attempt to be a heavy psychological thriller and moral tale, it ends up as an offensive piece that is an anathema to the family.

Rapper and underwear model “Marky Mark” Wahlberg, stars in a a psycho-sexual nightmare thriller from Universal called FEAR. Steve Walker is father attempting to keep his fractured family together. His daughter Nicole goes out dancing and meets David McCall. David listens to Nicole’s family problems and romances her. Tension builds as Nicole’s step-mom confronts Steve’s lack of discipline. David woos Nicole’s family and becomes the older son they wish they’d never had. Soon, the plot moves into an obsessive love triangle between Nicole, David and Dad. The truth is soon revealed about David when he rapes Nicole’s friend, scrapes “Nicole 4 Ever” into his chest, breaks the neck of her best guy friend, and stalks her family in a local mall.

Although the film is well directed, FEAR never gets past the fact that it is just another thriller. While the script attempts to bring out family issues for the 90s, the cliched plot always comes out on top. Mark Whalberg is certainly a teen idol, but this movie contains graphic content that even adults shouldn’t watch. Though it warns against picking up guys at dance clubs and quick relationships, it is a gruesome, violent, sex-filled movie disguised as a moral tale.